Doll in the Dark 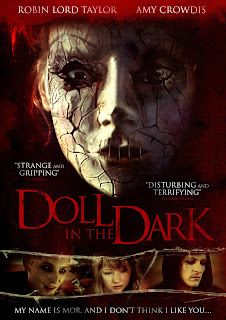 Doll in the Dark is an obscure US indie which was shot back in 2009 as The Melancholy Fantastic, played a few festivals in 2011 and surfaced on American VOD and cable in 2012. It generated some good reviews and a bit of fan appreciation then pretty much disappeared.

In November 2016, the film resurfaced under its new, more marketable title when Safecracker Pictures released it on UK DVD/VOD, exploiting the casting of a pre-Gotham Robin Lord Taylor. If you like Taylor’s portrayal of proto-Penguin Oswald Cobblepot, you will definitely also enjoy seeing him in this movie. It’s not one of those situations where a subsequently well-known name has a small role that renders a film inconsequential except for the most extreme fanboys/girls of that actor. Taylor here is 50% of what is essentially a two-hander and his character has the same sort of restrained craziness as Cobblepot. Just younger and less sociopathic.

[Update: Since posting this review, I have been told by the director that Doll in the Dark is a heavily re-edited version, not just a retitling. - MJS]

Amy Crowdis is Melanie Crow, a teenage girl living alone after both her parents died. She has a very creepy life-size doll which she treats as a real person. It’s a home-made, skeletal affair of stuffed limbs and torso surmounted with a cracked ceramic head. Sometimes it sits on the sofa, sometimes it’s in the kitchen, sometimes it rides shotgun in Melanie’s car. There is absolutely no suggestion that the doll is actually alive or possessed or has any independent life. This is not a supernatural tale.

The doll never moves, except for a couple of shots when an arm flops down. Noticeably, we also never see Melanie move the doll, except for one scene later on when she carries it upstairs. Removing that shot would have kept the creepy factor higher, but it’s already pretty high so no great loss.

Melanie meets Taylor’s skinny-jeaned emo character in a public library. It’s quite some time until we find out his name is Dukken, which I assumed was Dougan until the credits. Although it seems odd that we have no scene where he tells her his name, that lacuna is actually justified by a reveal near the end. Dukken and Melanie’s paths cross a couple of times and they start spending time together. Dukken is puzzled by Melanie’s doll but not freaked out by it because he thinks it’s just part of her ‘sick taste’, like decorating her Christmas tree with razor blades.

What we have here is an offbeat love story. Sort of. It’s what happens when someone whose freakish unconventionality is a deliberate choice meets someone whose idiosyncratic, individualistic behaviour and rejection of the norm stems from genuine mental health issues. Melanie is very, very cute but in a damaged goods sort of way. Somethin’ ain’t right.

There are other oddities of behaviour. Melanie seems to survive largely on pink ‘snowball’ marshmallows. When she does vary her diet to include a PBJ sandwich, she uses a large carving knife to spread the peanut butter. She watches 8mm public domain cartoons in a car in a barn, her own private drive-in. Although mostly she just talks to an ugly, weird doll. And occasionally the doll talks back.

This doll, we eventually realise, represents her mother.

Because we see everything through Melanie’s eyes, and because it’s obvious right from the start that she ain’t right in the head, she is effectively an unreliable narrator. As the film progresses, we will start to question exactly what is or isn’t real. All credit to Argentinian-born director Alejandro Daniel, this is well-handled and effective. What really sells this unnerving ambiguity is an absolutely bravura performance by Crowdis who has many solo scenes acting opposite just the doll prop. Taylor’s role is more reactive and his character necessarily shallower, since Dukkan’s persona is his own creation, but it’s a fine performance and I can well believe that this is what persuaded the producers of Gotham to cast him.

There are some areas where the film does unravel slightly, not least that it’s not made clear until well into the third act that this is actually happening around Christmas. Most scenes take place in Melanie’s home or open fields and roads so we don't get any confirmation that this is actually the holiday season and the decorations in her house are not a further represention of her detachment from reality.

This is only a short feature, running less than 70 minutes without credits, and thus doesn’t outstay its welcome, reaching its satisfying third act without resort to padding or unnecessary subplots. Though the final scenes offer some sort of resolution, even a happy ending, we know enough about Melanie (or little enough, if you like) to retain doubts about where this will go after the credits roll. What looks like resolution and catharsis could just be redirection and hiatus.

If that last sentence sounded a tad pretentious, then be aware that Doll in the Dark does on occasion steer dangerously close to the naively mannered angst of sixth form poetry. There are musings on death, there’s a (thankfully brief) discussion of Nietzsche, a copy of The Stranger by Albert Camus is a significant prop and there is a length quotation from Kierkegaard in the credits which seems random now but which originally explained and justified the title.

Fortunately, any time that it looks like Doll in the Dark might tip over into pretension some sort of narrative self-righting mechanism steers it back on course. This is an enjoyable, interesting film which is genuinely thought-provoking. You don’t have to be a loner goth to enjoy it. 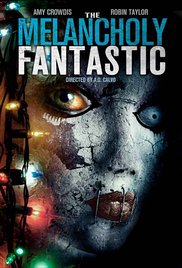 Filmed in snowy Connecticut, the movie was offered for sale at the 2012 AFM under the title The Christmas Stranger but doesn’t seem to have been released as that. Director Daniel, who used the screen name ‘AD Calvo’ for the original release, previously made a supernatural romance variously known as The Other Side of the Tracks and The Haunting of Amelia. Since completing this picture he has made three more horror films – The Midnight Game, House of Dust and Sweet Sweet Lonely Girl – plus a comedy thriller, The Missing Girl.

Josh Caras, Geneva Carr and David Pirrie make up the solid, if sparse and sparingly used, supporting cast, with Shirley Knight as the voice of the doll.

Bizarrely, the film has ended up on the IMDB twice, listed as both 2011 and 2016. This may lead to some confusion, but it should be pretty obvious, just from the stills, that Robin Lord Taylor made this several years before the first season of Gotham in 2014.