In January I posted four questions to 100 Big Names to celebrate my website's 15th anniversary. A few weeks later, I received these answers by email from the always awesome Joe Dante.. 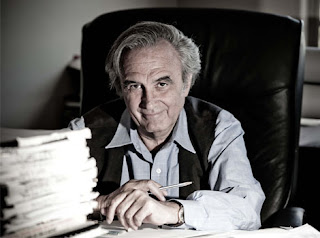 Which technological or social development during your career has changed cinema the most?
"The movie business I got into in 1975 was completely different from the one we have now. We don't shoot on film anymore for the most part, and we don't even project on film apart from a few venues in big cities. Theatrical movies now tend toward expensive spectacles and tentpoles, with the mid-range movies of the previous era moving to cable. And socially, the majority of films are no longer seen in theaters which means the vital connection between film and the communal experience has been lost."

What is the one question you’re fed up with answering in interviews?
"When are you going to make Gremlins 3?"

What would you rather be asked instead?
"Why doesn't Criterion put out The Second Civil War?"
Posted by MJ Simpson at 18:51