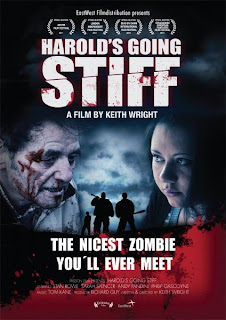 Within the British Horror Revival, the Postmodern UK Zombie Film (or PUZF) is a distinctive subsubgenre. It can be traced right back to Andrew Parkinson’s I, Zombie: The Chronicles of Pain in the late 1990s, one of the ur-texts of the BHR.

Then we can find high-profile, distinctive examples of British directors playing with the tropes of the zombie film - Shaun of the Dead, Colin - as well as more obscure or esoteric examples: The Zombie Diaries, Zomblies, The Invisible Atomic Monsters from Mars. Which is not to say that there aren’t straightforward, conventional zombie pictures, ranging from the name-cast-medium-budget (Devil’s Playground) to the cheap-and-cheerful (Zombie Undead).

Harold’s Going Stiff is definitely a PUZF, twisting the ideas and iconography of undead cinema to extremes. To the extent, in fact, that what Keith Wright has made here is a zombie film for people who don’t like zombie films, but which most zombie fans will, I fear, probably turn off after ten minutes [I got this one completely wrong! - MJS]. It’s a bold and uncompromising move by a talented and skilled director for whom the easy, commercial route is clearly not an attractive option.

Except insofar as it has zombies in it - and people do use the Z-word, unlike, say, The Zombie Diaries - you would be hard-pressed to consider Harold’s Going Stiff a horror film. It sits on the completist fringe of British horror, much like Wallace and Gromit in Curse of the Were-Rabbit. It’s really a love story with an ambience of wry Northern comedy, though certainly not a rom-com. And definitely not a rom-zom-com. 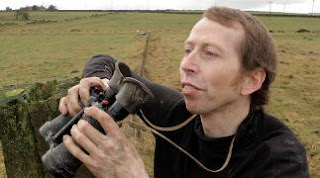 There has been an outbreak of a condition called ORD - Onset Rigors Disease - which ‘zombifies’ people (actually just men - it doesn’t affect women). The three stages are a stiffness of the limbs, then confusion and mental breakdown, finally aggressive and violent behaviour. However these zombies apparently don’t go as far as eating people’s brains. In fact, we don’t see anyone get eaten but that’s because these are slow-moving zombies, not 28 Days Later-style runners.

That’s the thing about shuffling zombies: they are only dangerous en masse. One on its own is easy to run away from and even easier to run up to and destroy. In Harold’s Going Stiff, we only ever encounter individual zombies, who are merely stiff-legged, angry and inarticulate. But not really dangerous. And not living dead. As so often nowadays, these are merely folk suffering from a disease - in this case, the pre-death onset of rigor mortis, basically.

The eponymous Harold Gimble (Stan Rowe, who was one of the background artists at the Brits when Michael Jackson did ‘Earth Song’ and Jarvis Cocker jumped on stage!) was the first recorded case of ORD and also, for some reason, the disease is developing in him much slower than in other cases. So while we are told (not shown) that hospitals are overflowing with ORD patients, to the extent that community centres and similar establishments are being used to house them, and while we encounter individual third-stage ORD sufferers out on the moors, Harold still lives alone in his house, visited only by the local community nurse.

This is Penny Rudge (Sarah Spencer, whose time as a drama student included an appearance in one edition of Celebrity Wife Swap!), a warm-hearted, lonely lass on the lookout for a Prince Charming but perpetually disappointed. She visits Harold regularly to check on him and provide physiotherapy sessions to ease his stiffness. 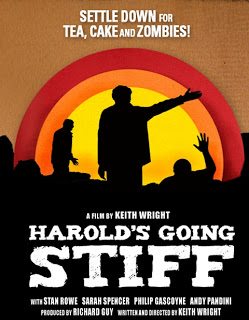 Harold is old and a widower. Penny is young and probably a virgin. Neither is looking for sex or passion but both are looking for love and they, not unexpectedly, gradually find that their special, platonic friendship provides the companionship that both are missing. Both actors give bravura performances, rendering an offbeat romance which could - let’s face it - have seemed creepy or weird into a sweet, sad tale of two people who are right for each other despite their differences.

Intercut with this is the tale of three vigilantes, have-a-go idiots taking advantage of officially sanctioned public action which allows citizens to kill ORD sufferers if they attack. Jon (Andy Pandini, who was in Whatever Happened to Pete Blaggit and a TV show called Tales of the Living Dead that turns out to be a History Channel archaeology-based drama-documentary) and Mike (Lee Thompson) are experienced zombie-hunters drive around Yorkshire with the gormless Colin (newcomer Richard Harrison) in tow. Colin is determined to score his first kill but is not only always too slow, he’s also the butt of endless slightly cruel jibes and japes from his two so-called friends.

The three vigilantes provide the limited violence and gore but the main focus is squarely on Harold and Penny - and this is where the film will lose zombie-philes. Because, with the best will in the world, Harold isn’t a zombie. He is basically an old guy with arthritis and the early stages of dementia (there’s a nice running gag about undrinkable cups of tea). If the Jon/Mike/Colin stuff was edited out (and you didn’t see the poster) this would seem to be an entirely mainstream gentle quasi-romance between a kind old man and his young nurse.

After a preview for cast, crew and friends, director Keith Wright shot some pick-ups to increase the ‘horror’ content of the film but it doesn’t change the essentially non-horror main plot, which is not only not horrific but has the exact shape of something which isn’t even genre but solidly mainstream. Good mainstream, excellent mainstream even - but presumably not what Keith was looking for, especially bearing in mind his decision to shoot those pick-ups.

Richard and Penny move together into a community centre where some more advanced cases of ORD are kept. Their hands tied behind their backs, growling and barking and eating food by sticking their faces into plates and bowls, these scenes are actually quite disturbing in their redolence of old-fashioned styles of ‘treatment’ for mentally disturbed people. 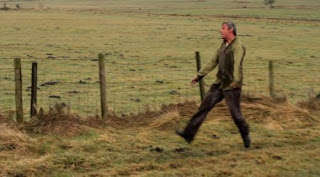 And that’s what ORD sufferers come across as: people with mental health problems. Sure. there’s some visual comedy as they run with stiff legs but for the most part the patients come across as simply ill and pathetic, in the word’s truest sense. Even the ones that lunge at the vigilantes seem to present no serious threat and to be nothing more than mentally ill. Which makes the violence meted out to them, especially given the official sanctioning of such violence, actually quite upsetting. There are connotations to this comic-book violence which contrast unpleasantly with the sweet relationship comedy-drama that is the A-story.

It pains me to say it but, for me, Harold’s Going Stiff doesn’t quite work. And the more it promotes itself as a zombie film, the less it works. But then, if it were too present itself as a gentle, Northern, cross-generational romance, the zombie-hunting sequences - which do become relevant to the main plot later and aren’t just token horror window-dressing - would be anomalous and bizarre. The denouement when the two storylines eventually cross is powerful and emotional but not enough to stop the film overall being a movie of two intercut halves.

The essential problem is Harold. He’s just not a zombie. If you showed any Harold-Penny scene to someone unfamiliar with this film and asked them to describe Harold, they would just say he’s a lonely, gentle old widower with arthritis and a poor memory. He’s not a monster, not even a human monster. We only know he’s a zombie because we’re told that in the publicity and occasionally in the dialogue.

There’s a tremendous irony, it occurs to me, in the fact that on the one hand we have a film like The Zombie Diaries where the film-makers are careful to never refer to the threat on screen as zombies even though that’s what they obviously are; and on the other hand we have here a film where the only way we know that Harold (or any of the other ORD sufferers) are ‘zombies’ is because other characters describe them as such. 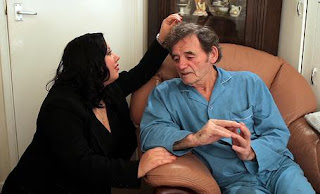 They don’t really act like zombies, they certainly don’t look like zombies. Cinematic zombies, in all their variants, are distinguished by rotting or diseased skin (not a predominant symptom of ORD although late-stage sufferers do look slightly icky) and a craving for human flesh, which we never really see here, despite the warnings that Mike and Jon give to Colin.

There’s no explanation of why Harold is developing the symptoms so slowly while people who started later have already reached stage 3 though we meet Dr Norbert Shuttleworth (Phil Gascoyne) who is studying Harold in the hope of finding answers. Nor do we ever feel that Penny might be in the slightest danger from Harold, even though we should because he might eventually reach stage 3.

Harold’s Going Stiff is a frustrating film because the two halves, each perfect in itself, just don’t fit together. It’s beautifully acted, wonderfully directed, with fine indie-British production values that belie its low budget. Naturalistic performances, visually appealing locations, excellent camera- and sound-work. Can’t fault any of that. But if it’s a romance, there’s too much violence in it. And if it’s a horror film there’s way too much romance and the circle just isn’t squared.

The characters are believable and likeable - even the vigilantes - and it’s clear from this and Keith Wright’s first film Take Me To Your Leader that he has a touch for characterisation that many other writer-directors would kill for. But, with the exception of the gormless Colin, there’s not much of the cheerful Northern eccentricity that populated Keith’s previous film.

Take Me’s Roger Bingham turns up in a few TV news sequences as exactly the sort of overweight, middle-aged male reporter that UK regional television still sometimes employs while the rest of the broadcasting world fixates on teeth-and-tits dolly birds. And Eleanor James (Colour from the Dark, Bordello Death Tales) of all people appears in an advert for a type of addictive sausage which is identified as the course of the outbreak, although that gag is never developed and seems somewhat shoe-horned in. 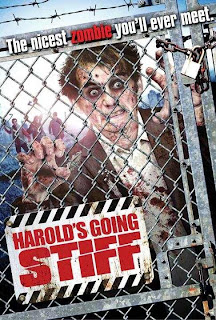 Among the cast is Molly Howe, a teenage actress who was in a few episodes of fantasy kidcom Jinx but, despite what the IMDB claims, probably isn’t the same Molly Howe who was in a Todd Solonz movie in 1995. Jane Hardcastle, who was a security guard in the Day of the Triffids remake and a businesswoman in an Autoglass ad, plays the owner of a charity shop where Harold buys a present for Penny. There’s also Lucy Wilkins (who played Bob in a stage production of Blackadder Goes Forth!) as the daughter of an ORD sufferer.

Composer Tom Kane (Surviving Evil) scored two zombie films in 2010: this one and the Ian McKellen-narrated historical zombie short E’gad, Zombies!. He also provided the soundtrack for an extraordinary-sounding version of The Tell-Tale Heart - a silent short starring Matthew Kelly!

Searching around for a suitable analogy, it struck me that Harold’s Going Stiff is actually very like the zombies which it portrays, in that it sincerely attempts to present a horrific threat but ends up just wobbling stiffly - albeit without losing any of its innate humanity, warmth and charm.