Kristyn Green is an up and coming actress who played Olivia in Doll Graveyard. She very kindly answered one of my e-mail mini-interviews in November 2005. NB. That is a real Emmy in the picture, although Krystin hasn't actually won one (yet). 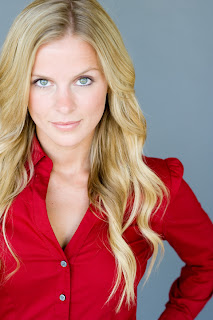 How did you find out about this movie and what attracted you to this role?
“I read about the project on a casting website and submitted myself for the role of Terri. I was called in to read for Terri, and about 30 seconds into my audition I was asked to read for Olivia. I immediately fell in love with the role because Olivia is so different than me, and those are always the most fun characters to play.”

Before making this movie, how familiar were you with low budget horror movies in general and the work of Charles Band in particular?
“I had a few favourites before filming Doll Graveyard, but I now have a much greater appreciation for low budget horror films. I had definitely heard about Charles Band and knew some of his work, but had no concept of how accomplished he was. He seriously has the longest IMDB I have ever seen!”

For you, what was the toughest part of making this movie?
“Wearing those damn shoes! The heels were so tall, and I was constantly falling down. My first day on set I had to run into the bedroom to see what ‘DeeDee’ was screaming about. I ran in, slipped, grabbed Gabby (DeeDee) and we both fell on the bed. I guess it was a great way to break the ice!”

What is Charlie Band like as a director?
“I don't know any way to describe him but simply amazing. He is so encouraging to everyone on set and really knows how to bring the best out of each actor's performance. He has a very clear cut vision of what he wants, and manages to achieve it within an incredibly short amount of time.”

What were the puppets like to work with?
“I'm not gonna lie... those dolls could be a bit tricky to work with at times. Luckily we had an amazing ‘puppetmaster’, Chris Bergshneider, who truly brought the puppets to life. He made our job so much easier than it should have been.”

What are your hopes and plans for your career beyond Doll Graveyard?
“All I can say for sure is that this is just the beginning for me. Expect to see my name a lot more in the future!"