I interviewed screenwriter James Gunn way back in April 2000, when he was working on the script for the first live-action Scooby-Doo movie. Since then, he has of course written not only the sequel to that but also the remake of Dawn of the Dead, which I thought was great and which, brilliantly, was released at exactly the same time as Scooby-Doo 2! James, who started out by co-writing Tromeo and Juliet with and for Lloyd Kaufman, made his directorial debut in 2006 with Slither. (There is a science fiction author named James Gunn - but that's another fellow.) 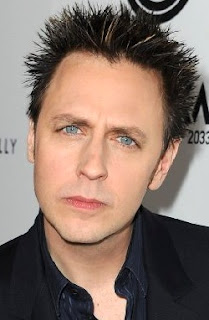 Is it true that you are currently working on a live-action Scooby-Doo film?
“I am indeed writing Scooby-Doo. I just finished the first draft, and it has been an absolute blast. It has just been put into fast track over at Warner Bros, and we're looking for a director.”

Is your script based on an earlier story or outline, or is it all your own work?
“It's all my own work. Warner Bros and the producer, Chuck Rovin, have been great in letting me go nuts. It's a twenty-four hour Scooby-Doo party over here, and I'm sloshed on Scooby Snacks.”

Is Mike Myers still attached to the project in any way?
“Not currently, though he's at this point still Warners' leading choice to play Shaggy.”

According to current internet scuttlebutt, the film may involve the anachronism of the gang still being like they've always been despite the world having changed over the past 30 years (very much like The Brady Bunch Movie). Sounds a great idea to me: any comments on this?
“No, we're not really doing this. The Brady Bunch Movie did it just fine. But it would be difficult to argue that Fred doesn't have some problem with style, considering his ascot and all. (Actually, though, the other day I bought a pair of boot-cut powder blue slacks that look exactly like Fred's. Not to be too much of an egomaniac or anything, but they make my ass look fine. That's why Fred gets the chicks.)”

Recent Scooby-Doo DTV features have been well-received because they've had a certain knowing post-modern attitude (Christ, that sounds pretentious!). Will the movie go the same way (ie. based on people's memories of the show, not just aimed at kids)?
“Absolutely. The movie is aimed equally at thirty-five year olds as well as five year olds. I'm a huge fan of Scooby-Doo, and I'm committed to turning every convention of the show in upon itself.”

Has it been determined yet how Scooby himself will be portrayed: CGI, animatronics or a combination of the two?
“No comment!”

Does the film involve any of the ghosts/monsters from the original series?
“I will say that many of our old favourites will receive their short, tender moment in the sun.” 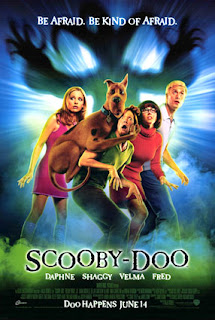 Does Scrappy Doo appear? (Hint: a lot of folks will be really happy if the answer is "no" or "yes but he gets killed off really quickly".)
“I'm firmly in the anti-Scrappy camp myself, and I promise not to let anyone down. However, I don't know if Warner Bros will let me retain the scene where I personally strangle him to death. Whatever the case, the little son-of-a-bitch's future is not bright.”

Obviously the film hasn't been cast yet, but do you have any personal ideas, from the current crop of hot stars and starlets, as to who should play Fred, Daphne, Velma and Shaggy?
“I know I'm alone on this, but I'd like Buddy Hackett to play every role. Either that or Craig T. Nelson - you know, ‘Coach.’ I hear he does an excellent Daphne. Oh, and if Benny Hill were still alive...! Seriously, though, I think a lot of actors would be great for the roles, but that's another thing I can't really say at the present moment...”

This is actually quite a serious one (though it doesn't sound it): how have you managed to keep any tension in the story when everyone knows it's really Old Man Smithers from the amusement park?
“Who said it's Old Man Smithers? This is a movie, not a twenty-two minute show, and the stakes have been upped accordingly. Our gang is going to have to save the world, or die trying. It's serious, man. It's deadly, deadly serious. Shaggy will be lucky not to get his face ripped off.”

In a best case scenario, when do you think this film could hit our screens?
“Being a moron, it'd be difficult for me to have my guess mean anything more than anyone else's. Next year. And, yes, because I may very well get my ass kicked for the above answers, there are other projects I'd like to publicise:

“My first novel, entitled The Toy Collector is being released here in the States May 22 by Bloomsbury Publishing. It concerns a drunken young fellow named James Gunn who works in a Hell's Kitchen hospital, where he steals pharmaceuticals and sells them to finance his toy collection habit. This is intercut with fantasy sequences from his childhood that are, more than anything else, like a sex and violence version of Toy Story. Strangely, there are a few Scooby-Doo references in the book, which was written long before I was hired to write Scooby. 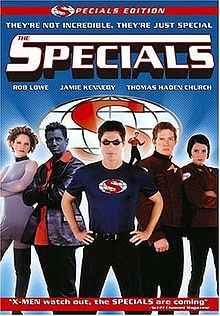 “Also, I have a film being released in the States next September entitled The Specials. It stars myself, Rob Lowe, Jamie Kennedy from the Scream movies, and my brother Sean, and it was written by me. It's the story of a group of superheroes on their day off - we focus not at all on bashing supervillains, but instead on the interpersonal relations between the group members. If you asked me to describe it with one hyphenated word I'd say ‘laff-riot.’ I play Minute Man (pronounced ‘My-noot’) who is able to turn small, and I'm insecure because my superpower kind of sucks.

“In addition, we're also finishing up Spy vs Spy for Warner Bros and director Jay Roach (the Austin Powers movies).”

[NB. Although Spy vs Spy never appeared, The Specials is one of my favourite films and highly recommended. - MJS]
Posted by MJ Simpson at 20:48