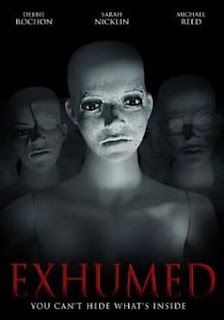 I enjoyed Exhumed a lot, and I think you will too. It’s an intriguing, engrossing character study of a dysfunctional ‘family’ finally collapsing. It reminded me a little bit of The Addams Family (but without the comedy), a little bit of The Rocky Horror Picture Show (but without the songs or the fishnets) and a little bit of one of my favourite novels of all time, Nathaniel Hawthorne’s The House of the Seven Gables. Not that it closely resembles any of these (especially not Rocky Horror!) but if you were to plot those three stories on some sort of graph (Christ knows what the x and y axes would be...), somewhere within the resulting triangle is Exhumed.

None of the preceding paragraph was very helpful, was it? Let’s start again.

The household in Exhumed isn’t strictly a family but they act as a pastiche of a family unit, with the matriarchal role taken by Debbie Rochon as an unnamed character credited as ‘The Governess’. I have commented before on how Rochon, though she is best known for her many roles in Troma (and sub-Troma) silliness, is actually a fine actress when given the right part. And here she has been given the right part. 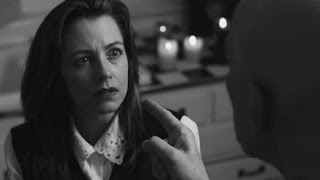 The very lack of background information on the Governess, and indeed the other characters, allows Rochon and her fellow cast members to imbue these performances with layers of subtlety that might not be available within a more prescriptive scenario. Rochon rises to this challenge and delivers one of the finest performances of her career, The Governess is manipulative, authoritative, even cruel, but convinced that what she is doing is right for the group.

Alongside (or opposite) her is a character credited as (and indeed, dressed as) ‘The Butler’, played by tall, bald Michael Thurber (Murder University). He also is working to keep the group together but in a calmer, more sedate way. Don’t let that fool you into thinking he’s ‘normal’ however: normal people don’t keep shop dummy facsimiles of their housemates in the basement.

Sarah Nicklin (Zombie Allegiance, The Black Dahlia Haunting) is Laura, a virgin who has never known any life outside of this little commune since her parents died when she was very small. Her attempts to understand and reach out to whatever is outside start a process which will eventually lead to this small, curious world collapsing. The Governess and the Butler act in loco parentis to Laura while the other two inhabitants are more like lodgers: good-time girl Rocki (Evalena Marie: Remains, Beg) wants to help Laura find a man; fat slob Lance (Rich Tretheway: Erebus) seems to have little interest in anything.

All five housemates sit down for dinner together, a take-away received without letting the delivery guy see anyone. The whole household shuns the light, keeping curtains drawn, although we do see an early scene where the Governess, the Butler and Laura venture out in daylight, swathed in coats and sunglasses. 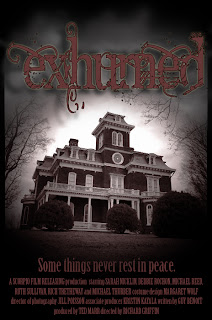 A sixth member of the household has died, or possibly run away, so a room becomes vacant. The new tenant is good-looking college kid Chris (Michael Reed: VAmL), a normal guy who becomes the object of Laura’s verge-of-maturity teen-crush attentions, much to the Governess’ displeasure. Once Chris enters the house, the die is cast. Something will happen. And it does.

But this is not a film about stuff happening, it’s about the people that it happens to, and the relationships between those people. And for those of you wondering well, is it a horror movie, yes, it’s a horror movie. And it does get quite nasty near the end but that’s not the point. The point is the people that it gets nasty to and around, and the relationships between those people which lead inexorably, step by step, towards that nasty situation. That’s the horror, right there, not the limited amount of blood. And no, nobody gets exhumed. It’s a metaphor.

Several of the actors have worked together before and since on various productions including some directed by Richard Griffin who helms Exhumed with a subtle, sympathetic and stylish hand from a finely crafted script by Guy Benoit. Which comes as a surprise if you check the filmographies of these two guys because their previous movies were called things like Atomic Brain Invasion, The Disco Exorcist and Frankenstein in a Women’s Prison. Griffin’s latest movie, according to the IMDB, is Dr Frankenstein’s Wax Museum of the Hungry Dead of which the user comment “Jesus Franco would be proud” tells us, I think, all we need to know. Benoit (who in his early days helped to shift things on the sets of Danny Draven’s films Deathbed and Hell Asylum) has recently written The Last Halloween for Christopher L Ferreira, an actor who was in several Griffin pictures.

It is clear from Exhumed that Griffin is capable, like Rochon, of handling both serious, character-based horror and OTT hoopla (he previously directed Debs in Splatter Disco and Nun of That). On this film he was greatly assisted by the terrific monochrome cinematography of Ken Willinger, who has DP-ed a lot of documentaries and been a camera operator on a range of TV stuff including The Daily Show with Jon Stewart. There are a few brief colour flashbacks and it becomes evident when the credits roll that these relate to a time when the ‘cult’ was larger and more established. 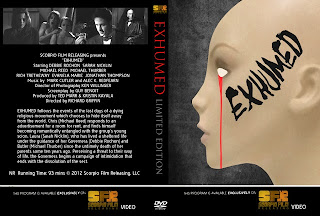 Thing is, up to then I hadn’t really thought of this household as a cult, or even the remnants of a cult. It had crossed my mind, but there’s no evidence of worship or ritual or belief. I can let this go. The film works equally well whether you view the pseudo-family as the last remnants of a depleted cult or just a bunch of agoraphobic weirdos.

Thought-provoking, imaginative and original, Exhumed is a terrific film and I was really glad to get a chance to watch it.

Not to be confused with Brian Clement’s 2005 zombie anthology Exhumed.

Email ThisBlogThis!Share to TwitterShare to FacebookShare to Pinterest
Labels: 2013, USA