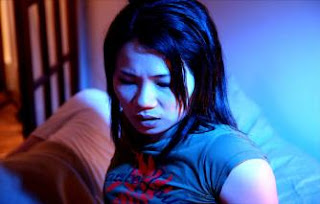 This spooky short film from the Loonatik and Drinks team of David Lilley and Stephen Gray is a vignette, a sequence of frights without any real narrative. It looks beautiful, the sound design is terrific and the scares are really scary. What it lacks is an actual story with a beginning, middle and end: this is all effect and no cause. But when something lasts only seven minutes, that’s not as serious a problem as it might be elsewhere.

The Hand falls into the same sub-subgenre as Watch Me and Ghost Month: western films not just influenced by Asian horror but deliberately aping the stylistic touches, all coloured gels, deep shadows and percussion music. In this little treat, a young Japanese couple (played by Chinese actors) retire to bed but the girl can’t sleep. Accosted by visions (of a tunnel and a forest, so far as I can make out without freeze-framing) she is visited twice by a spectral hand. The first visit is a simple physical effect but very spooky, the second is some relatively basic CGI employed in a really disturbing way. I can’t honestly decide which is better. Or worse, if you see what I mean.

And in the morning, she has gone. The hand has got her.

This is a middle, inspired by a nightmare that Dave Lilley’s wife Helen had. Nightmares are scary but, like any dream, they don’t have a narrative structure. A producer once told me that most people who claim to have “a great idea for a movie” actually have a good idea for a scene. And that’s what we have here. Which is not to say that (a) this isn’t a very well-made, genuinely spooky little film and (b) The Hand could not be expanded into a feature, with a good scriptwriter at the helm.

Grant Bridgeman (who has worked with Steven Shiel on various shorts and the superb Mum and Dad) is credited as ‘sound mixer and additional sound recording’ while Daniel J Yeomans was ‘supervising sound editor’. That sounds a complex arrangement for a film with virtually no dialogue and fairly long sequences of silence, but the sparsity of sound effects and music makes their choice and arrangement even more crucial. The original music was provided by Kubilay Uner who also scored the Corbin Bernsen-starring sci-fi feature The Tomorrow Man. Lilley and Gray share directing and editing credits, with Stephen concentrating on ‘photography and visual effects’ while Dave gets the writer and producer gigs.

The screener disc which I received also had two Loonatik and Drinks microshorts: Fate and Mr McKinley, a hilarious spoof silent film which has played more than twenty festivals around the world; and Lucy Spook in The Birthday Wish, a black comedy about an emo girl shot in an effective mixture of black and white and colour which was shortlisted for the Bafta ‘60 Seconds of Fame’ competition. These two are available to view on the L&D website, along with a trailer for The Hand. (A trailer for a seven-minute film? Okay...)

Also on the L&D site you can read about some of their future shorts including: Vespers, a post-apocalyptic tale set in 1850; further outings for Lucy Spook and McKinley; and adaptations of ‘The Pit and the Pendulum’ and Conan Doyle’s ‘The Horror of the Heights’.

I’m a big fan of Loonatik and Drinks. Their films are short, pithy and to-the-point but they’re also magnificently put together, using the absolute best in sound design and some extraordinarily good CGI to create fantastic worlds. I can’t wait to see what they do with Conan Doyle and Poe. Or indeed with anyone or anything.

My only reservation with The Hand is the incompleteness of it, but as an experiment in style and production it’s a resounding success.