The Harsh Light of Day 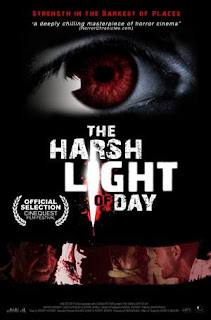 When Left Films released The Dead and the Damned in the UK, the title was cheekily changed to Cowboys and Zombies to ride a little of the Cowboys and Aliens promo-wave. Left are releasing this UK indie into selected cinemas a couple of months after big budget Bruce Willis actioner The Cold Light of Day but there’s no title change here. Young director Oliver S Milburn called his film The Harsh Light of Day - and it’s a great title for a vampire picture. (Also worth noting that neither film has anything to do with the boring, Richard Driscoll-produced Dennis Nilsen biopic Cold Light of Day.)

This is an impressive debut, an original twist on the vampire subgenre which pulls several other types of horror films into the frame too. Dan Richardson stars as Daniel Shergold, a writer who has just completed a book on the occult, with Niki Felstead as his wife Maria. Richardson has subsequently made Vamlet, a Canadian production which isn’t actually a vampire version of Hamlet, it’s a mockumentary about an attempt to make a vampire version of Hamlet.

On the night of Daniel's book launch party, the couple’s home is broken into by three masked men who throw Daniel downstairs then attack Maria. Paralysed, Daniel lies in agony screaming to his so-close-but-so-far wife, then forcefully drags himself upstairs, too late.

Milburn (and editor David Spragg) do a great job with this set-up sequences, cutting between the launch party, the drive home, the evening in, the masked figures approaching and the start of the attack itself. The film (which runs a nice, tight 80 minutes) then wastes no time in moving on to some time later: Daniel is in a wheelchair, attended by a helper named Fiona (Sophie Linfield: Underground, Never Play with the Dead). 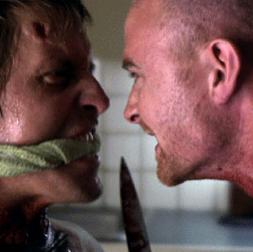 Voice-on-the-phone McMahon (Lockhart Ogilvie: Demon) was a vital source of info for Daniel’s book and now offers to help, via an intermediary, so into Shergold’s life comes a character called Infumari who is, we fairly swiftly deduce, a vampire. Not that the V-word is ever used in this movie. This is Giles Alderson, possibly the busiest male actor in the British horror. He was previously a vampire in Night Junkies and has also appeared in (or will appear soon in) E’gad Zombies!, Till Sunset, The Torment, The Nephilim, Stalled and Tales of the Supernatural.

So the basic schtick here is that Daniel becomes a vampire and is able to use his new powers to hunt down the bastards who murdered his wife. But this is no cheesy B-movie. These vampires (like Alderson’s turn on Night Junkies) are living beings, not supernatural entities, and don’t have those silly, impractical teeth. What they have is increased strength, a thirst for human blood (or raw meat, at a pinch) and immortality, which translates into extremely fast healing of wounds - including Daniel’s broken spine.

There’s plenty of angst and introspection in this middle act, courtesy of a fine, often wordless performance by Richardson. What’s less effective (and less clear) is the means by which he actually identifies and locates his quarry. A certain amount of animalistic sniffing, even at this late remove, somehow brings up a combination of smells which lead to a search for a butcher’s shop, a pet shop and a brothel all in close proximity. He also somehow remembers the face of one of the men, even though they wore masks. 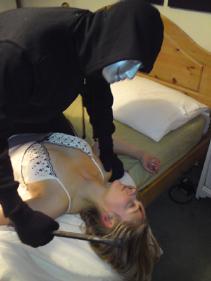 Even if we scoot over the basic problems with this section, it’s difficult to see why the three establishments must all be within a few hundred yards. I mean, I buy meat from the butcher just up the road, but I get the guinea pigs’ hay from a pet shop a couple of miles away, near where my brother-in-law lives. And if I was ever going to frequent a house of ill repute, it certainly wouldn’t be round here or round there.

It could be argued that, once he has remembered a face, Daniel could have just gone straight back to the police. But little things like his working legs and his photophobic, forced nocturnal existence somewhat prevent this. No play is made of this irony, but then I’ve only just thought of it myself.

The tracking down of the thugs (and the guiding hand behind them) is suitably satisfying and makes The Harsh Light of Day a revenge thriller too. A decent, middle-class man taking violent, remorseless revenge on those who attacked his family. It’s a scenario we’ve seen all too often in horror cinema but rarely in Britain and very rarely over here in recent years. The rationale behind the attack moves the film into another horror subgenre, which I won’t identify here, and there’s even about five minutes of found-footage style camera-work where we see everything that happens through a camcorder.

The film stumbles towards the end, climaxing too early and then hitting the brakes for an overlong and misplaced conversation between Infumari and Daniel about the pros and cons of the vampire life. This should have happened earlier in the story so that we could move swiftly from the violent denouement to the poignant epilogue. It could also have done with a few more passes because this (and some of the other dialogue, to be honest) is a little prosaic. Things are described and explained instead of being alluded too. It’s all a bit too Q&A. Here’s the secret of good movie dialogue: instead of Q&A, structure your conversations as Q&Q or A&A. It always sounds zippier. Or if you must have Q&A dialogue, the characters need to be doing something unrelated, not just sitting in a living room. 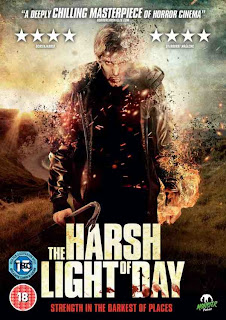 The impression I get is that Oliver S Milburn is stronger as a director than as a writer, though let me stress that I’m picking nits here. While I’m at it, Samuel Stewart’s photography is good but suffers a little from a touch of the old video-look; more a technical than artistic problem, I think. But the sound quality is excellent throughout and Jeremy Howard provides a fine score.

The Harsh Light of Day is a storming debut and a gripping, thought-provoking, serious, very British horror film. Recommended viewing, and let’s see what Milburn comes up with next.