A Home for the Bullets

God bless Steve Sibley for making a feature-length film - and indeed getting it shown at the Sunderland Film Festival, where I’m sure the cast and crew had a grand old time watching their work - but after a walloping 126 minutes of this, I was desperate for it to end.

The word that kept going through my head as I watched this was ‘polytechnic’. I’m not saying that the film has anything to do with Newcastle Poly (whatever it’s called now) or indeed any other higher education establishment, but lots of the sets look like either polytechnic offices or student bedrooms, lots of the cast look like students, and the poor technical quality suggests the whole thing was made on a camcorder borrowed from an AV Department.

A prologue is set in Vietnam in 1969. While scene-setting captions are often stupidly redundant (like ‘London, England’ over a shot of Big Ben), this one is very useful because the three men we’re looking at are walking through deciduous woodland with some 1970s buildings in the background (possibly Newcastle Polytechnic). Suddenly they are attacked by about five minutes of footage from Troma’s War and they return fire on the attacking hordes of khaki-clad extras with machine-guns and digitally added bursts of fire.

To be fair, the footage was used with permission and indeed Lloyd Kaufman appears briefly later on in flashback (as ‘Uncle Lloydy’) reminding the hero how to fight. But the prologue sets the tone for the rest of the film in that it goes on far, far too long and it thinks it’s much, much funnier than it actually is.

Moving to the present day - after a title sequence which manages to misspell SN Sibley’s production company as ‘Celluliod God’ - we find ourselves in Newcastle-upon-Tyne where a copper named Axel Falcon (Ken Mood) is trying to track down a ‘master criminal’ named Davro (Scott Johnson) who wears a fedora, strokes a cat and laughs maniacally. Davro is trying to ‘take over the city’ in some unspecified way and was responsible (we see in flashback) for killing Falcon’s partner - who is called (we discover, much later, in one of the few genuinely amusing moments in the film) ‘Partner’.

Falcon is two weeks away from retirement when one of Davro’s men kills his wife and son. Undeterred by orders to drop the case by his superior (Norman Felton), Falcon tracks down Davro with the assistance of a mysterious phone informant who calls himself Lionheart. Actually, that makes the confused and chaotic plot seem considerably more straightforward and understandable than it is.

One of the film’s biggest failings is that almost every scene goes on far too long with characters often repeating themselves and unfunny winks-to-camera failing to retain the viewer’s interest. The action scenes drag, especially one extremely lengthy fight in a warehouse in which Falcon beats off the same six masked henchmen again and again and again. This has no fewer than three fake endings, but nothing new or clever happens after each restart, it’s just more of the same lame fighting, made all the lamer by the use of toy guns and plastic axes clearly purchased from the local pound shop. As in the prologue, gun-blasts are added digitally, together with flashes of red which are presumably supposed to represent spurting blood. 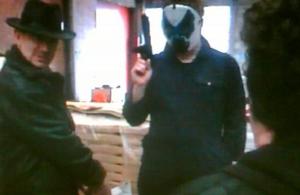 There are also lengthy montages of Falcon exercising (which suggest a startling homoerotic subtext in places) and a number of scenes where the action is slowed down, or occasionally speeded up. The editing (also by one-man band Sibley) is, I’m sorry to say, particularly poor throughout. There are lots of attempts at clever jump-cuts within scenes and intercut flashbacks but they only serve to emphasise the frankly hamfisted transitions between scenes. Worst of all (if we skip over some of the acting) is the sound which is desperately bad, rendering much of the dialogue inaudible (although the thick Geordie accents aren’t actually a problem to anyone who has seen enough episodes of Auf Wiedersehen, Pet). One scene between Falcon and his boss after he has discovered his slain family is rendered completely pointless because the two actors’ dialogue is almost entirely drowned out by the soundtrack music. Towards the end there is a brief, inexplicable, pointless sequence that has something to do with demonic possession and elsewhere one character says that he was rebuilt after being killed: these scenes seem to have fallen in from a different film.

The movie's saving grace is a bravura performance by Ken Mood as Falcon, who plays the whole thing straight, even as his character teeters on the edge of hysteria (he reprised his character in Thomas Lee's Full Moon Massacre). Some of the other actors are good but many are diabolical and there are numerous instances of people tripping over their lines. Characters grinning at the camera and giving a thumbs up seem designed to let the audience know that the film-makers realise how cheap and cheesy this all is. The problem is, it is cheap and it is cheesy - in fact, the bandwidth for you to read this review is probably costing more than the entire budget of A Home for the Bullets - but cheap and cheesy is all it has going for it by way of entertainment, excitement or interest. And that ain’t enough. 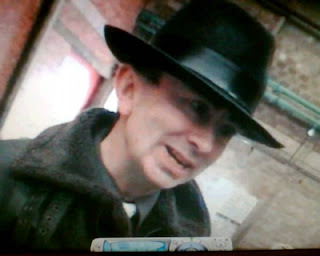 In any artform, it takes great skill to deliberately make something so bad that it’s entertaining. You have to be able to make a really, really good film before you can make a deliberately bad one. And if you do insist on being deliberately cheap and cheesy, for God’s sake don’t do it for two hours. Even a good indie feature should never be more than about 90 minutes.

The film doesn’t use its cheapness in any skilful or adroit way, it just wears it on its sleeve. Although characters play policemen and soldiers, nobody apart from Davro (in his fedora) and Lionheart (in leather coat and gloves) seem to be wearing anything other than the actors’ own clothes. Sets are simply used as they are found: Falcon’s son’s bedroom has hundreds of videos on shelves while Falcon’s own bed is simply a folded-down sofa-bed. ‘Master criminal’ Davro has a small office with a cheap PC and a bunch of box-files on some metal shelves. Nothing has been dressed: not the sets and not the actors.

This is guerilla film-making, heck it’s almost dogme (passers-by inhabit the background of many exterior shots) but it’s a story and a set of characters which are completely unsuitable to such an approach.

It’s not rocket science, and it doesn’t have to cost anything. For example, if you are going to have a cop talk into his lapel, at least go to the trouble of finding something small and black to clip onto that lapel so it looks like he’s talking into a radio and not just chatting with his jacket. And if you can’t afford/find anything that looks like a psychiatrist’s couch, then rewrite your script to remove any scenes in a psychiatrist’s office. Don’t just film them in somebody’s mum’s living room with your main character lying down on an MFI sofa and hope nobody notices.

A film-maker might be able to excuse this sort of cut-price ‘production design’ (not that there is a credited production designer, of course) if he has a blisteringly clever and funny script, top-notch performances and sound that wasn’t recorded on a camera-mic. Note: might be able. The brutal truth is, a duff film doesn’t stop being duff just because it says ‘look how duff this is’. 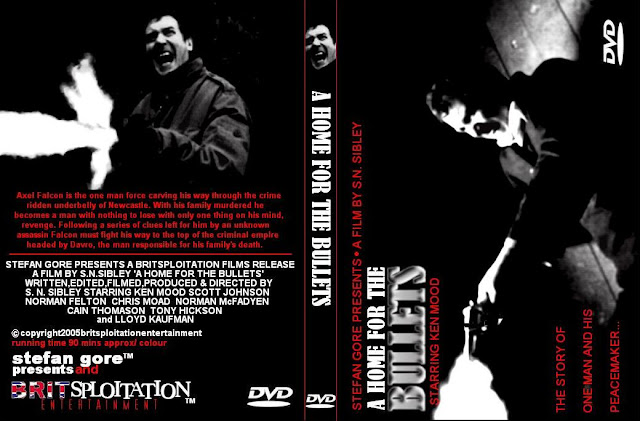 Now, I don’t want to put SN Sibley off making movies. He clearly does know how to point a camera and frame a shot, and some of the dialogue (when it can be made out) is very nice indeed. He has already made a sequel to this, the zombie spoof A Grave for the Corpses, using many of the same cast and crew, and he has also made a more serious film, Shopner Desh, with and about the South Shields Bangladeshi community. Practice makes perfect and the more films you make, the better you get. My advice is: invest in (or borrow) a boom mic, find yourself a production designer, limit your cast so you don’t need to use your non-acting mates, and tailor your stories to the sort of things that can be done on a tiny budget. This will allow your own talent to shine through. A Home for the Bullets is not only much too long, it’s also much too ambitious.