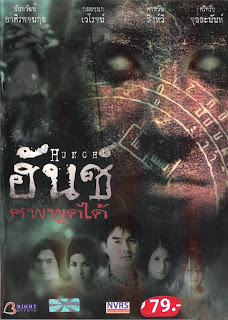 Over the past couple of years I have probably watched a dozen or more Thai movies, both modern films and old ones, and I have enjoyed them all to a greater or lesser extent. But there's a first time for everything and I have to report that Hunch is complete rubbish. No national cinema is perfect and every country that makes films makes both good ones and stinkers. No reason why Thailand should be any different.

First we get a very lengthy sequence of the drive there, including a stop at a garage where Nerdette goes to use the ladies' toilet. While this is shown to be unhygenic and unpleasant, no amount of spooky music can convince us that a girls' loo is actually a scary place. Nerdette hears a noise in another cubicle, investigates, and finds - a cat. Then something really scares her! Except no, it's just Slut larking around.

So they all get back in the car and drive off, with Sensible Girl telling Slut not to be such a prat. It may be that this sequence, including lots of dialogue which means nothing to me on this unsubtitled VCD, is full of scene-setting and character development. But I doubt it.

On reaching the house, all five jump out of the car and leap fully-clothed into the nearby pond (apart from Nerdette who lowers herself tentatively down from the short wooden jetty). They then spend a good five minutes splashing around, and there is no way that this constitutes scene-setting or character development. Like most things in this movie it's just there to pad the flimsiest of stories out to feature-length.

As the soaking wet youngsters head into the house we glimpse, for exactly one second (I counted the frames) a pale girl's face in a gap in the trees. This is the solitary spooky or unnerving or - to be frank - good bit in the whole film. Hopes of an atmospheric ghost story are however quickly dashed as we see the shot again, in flashback, in slow motion. And then lots of other shots of the same ghost (who at least doesn't have hair hanging over her face like every other post-Ring spookette).

That night, because there is nothing better to do in this huge, luxurious house with a fully stocked larder and a wide-screen TV, the quintet play with... a ouija board. Oh my word: teenagers alone in an isolated house experimenting with a device for contacting the dead which starts out as a joke but then becomes terrifyingly real. Well, we’ve never seen that in a film before.

Weird things start to happen, including both the inexplicable (Sensible Girl has visions of people dancing in a bar) and the explicable (Nerdette is frightened by something in the shower, which turns out to be a gecko on the wall). At night, Nerdette tries to seduce Jock, presumably because she is possessed, but Sensible Boy intervenes. Throughout all this we get cutaway shots of the pale girl either in ghost form or floating underwater, and occasionally a pair of eyes superimposed over a shot of trees, looking like a bad 1980s video sleeve design. 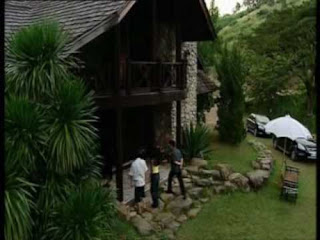 The next morning Sensible Girl wakes up and finds that Nerdette, who was sharing the room with her, has disappeared. She and Sensible Boy wander around the garden and the surrounding woodland calling for her, but to no avail. Meanwhile, Jock and Slut decide to drive into town but veer off the road when a pale figure appears before them. Another car was going the opposite way - though it's not clear if that contributed to the near-accident - from which emerge two blokes who ask for Jock's driving license so are presumably some sort of policemen, though they're not in uniform.

Jock and Slut drive back to the house, followed by the two blokes (who we'll call Cap and Moustache for ease of reference) who then start searching the house, presumably for drugs. While this is going on, Sensible Girl looks out of the window and sees Nerdette walking, transfixed, along the jetty and about to fall into the pond. She sees this scene illuminated by the full Moon which shines down from a cloudless night sky.

Hang on a minute, wasn't it 'the next morning' only two paragraphs and about ten minutes ago? Indeed it was. Unless the search for Nerdette took the best part of ten hours, then it has become the middle of the night only an hour or two after Sensible Girl woke up and had breakfast. This cavalier attitude to day/night continuity permeates the entire film, to the extent that it is completely impossible to determine over how many days and nights the action takes place.

Anyway, Sensible Boy and Sensible Girl run down to the pond and dive underwater where, of course, everything is brightly illuminated by daylight streaming in from the surface. Nerdette is located and brought up onto the jetty, but Sensible Girl is still underwater where she has been grabbed by the panda-eyed, not particularly water-logged corpse of ghost girl. She sees images of the girl dancing in a bar with friends, being watched by Cap and Moustache, then drugged, brought to the house and raped and murdered, before Cap dumps the body in the pond, attached to a heavy stone.

Sensible Boy extricates his friend from the corpse's grip, where she seems to have been for at least five or six minutes, and brings her to the surface. She recognises Cap as the guy from the vision, then Sensible Boy and Cap fall in and fight underwater where once again no thought is given to the amount of time that people can normally hold their breath. The corpse grabs Cap and doesn't let go as Sensible Boy leaves the bastard to his grizzly fate.

On the jetty, Sensible Girl is approached by Moustache and she realises that, although Cap dumped the body, the actual rapist/murderer is this other guy. He pulls a gun on her, but Sensible Boy surfaces, grabs a gun from somewhere and shoots Moustache. It's all very confusing, but the basic gist is that the spirit of the girl who was raped, murder and thrown into the pond has achieved revenge. One is left wondering how the five teens are going to explain the two dead bodies to the authorities and also how come, given that the corpse is weighted down with a boulder that Cap could barely lift and is therefore right next to the jetty from which it was dumped, nobody noticed her during the lengthy period of splashing around, all within a couple of feet of the jetty, when the group first arrived.

Hunch is not only thoroughly formulaic and predictable, it is also very poorly directed and edited. If this isn't the work of a former pop video director then I'm the Secretary General of the United Nations. It's all style and no substance, and often descends into really, really lengthy scenes that make their point and then drag on and on and on, whether it's the early sequence in the garage toilet, the endless shots of Sensible Boy and Sensible Girl looking for Nerdette, or a softest-of-softcore 'sex' scene between Jock and Slut which must last a good six or seven minutes and in which we don't even see a naked breast. If it's not going to advance the plot or illuminate character, you would think it could at least be a turn-on.

'Mercifully short' is the kindest thing that can be said about this pile of Thai tosh. And no, I have no idea why it's called Hunch.

The first disc opens with trailers for schoolgirl horror movie May, overblown comic-book adaptation Spawn, some Thai zombie comedy that I couldn’t identify and (oddly) the heart-warming, Michael Caine-starring, coming-of-age saga Secondhand Lions. The second disc closes with trailers for the Bollywood movie Market, tasteful disease-based Hong Kong comedy City of SARS and the truly abysmal video game spin-off Mortal Kombat: Annihilation which really does give the impression of being the worst film in the world and may simply be there to make the Spawn trailer looking interesting.