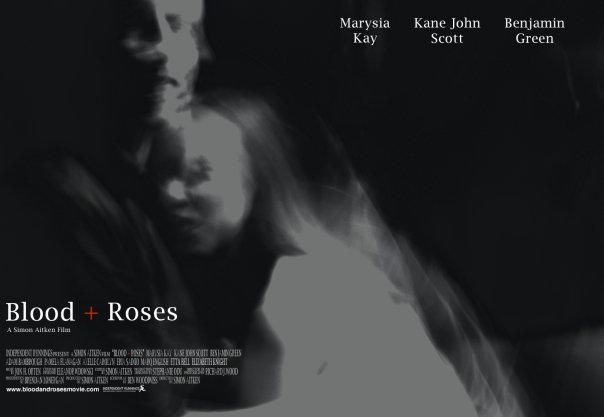 Blood + Roses is a serious, thought-provoking, meaningful vampire movie which benefits hugely from an intelligent, literate script by Ben Woodiwiss and a belter of a central performance by Marysia Kay. Its biggest problem lies in the establishment of the situation which takes quite some time to become clear, and even then not completely so.

Jane (BHR regular Kay) and Martin (Kane John Scott) are a young married couple who drive to a large, country house. It’s a converted 17th century farmhouse by the looks of things, richly appointed and tastefully decorated (check out the awesome carved wood bedstead!). As the suitcases are unloaded from the car, the audience’s natural assumption is that Jane and Martin are on holiday, renting this place which a couple their age could not normally afford. 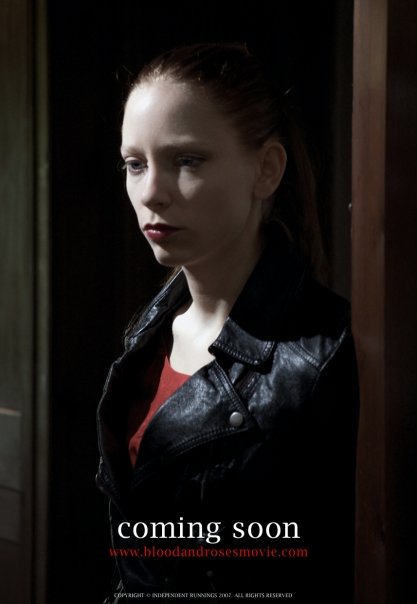 Jane is, we eventually learn, a model although she hasn’t worked for six months after an unspecified trauma which may become specified later although the two things are not implicitly linked. We are never told what Martin’s job is, if indeed he has one. Since the couple treat this fabulous, huge house in the country as their own home – or at least as their second home – and since their friends live nearby, we must eventually assume that Jane’s modelling career is (or was) so massively successful that they can afford this place. But there’s no other evidence of these two being hugely wealthy (they don’t drive a Porsche…) and the precise nature of their relationship with the location remains distractingly unclear.

Martin is a bit of a prick and there are clear cracks in the relationship. Then Jane notices – and is noticed by – a suave, handsome, mysterious, charismatic stranger. This is Seth (Benjamin Green) whom we know from a London-set prologue to be a vampire looking for a companion. Turned by Seth, Jane initially falls ill but then finds her strength returning, only more so, and alongside it her determination to do something about her prick of a husband.

Like Woodiwiss’ subsequent Benny Loves Killing (and his intermediate shorts), this is a story of female identity and empowerment; it would be labelled ‘feminist’ if written or directed by a woman. Although of course it takes a man (or at least, a male character) to ‘rescue’ Jane from herself and her situation. But that’s for film theorists to argue about. What we’re more concerned with is: how does this stack up as a vampire film? 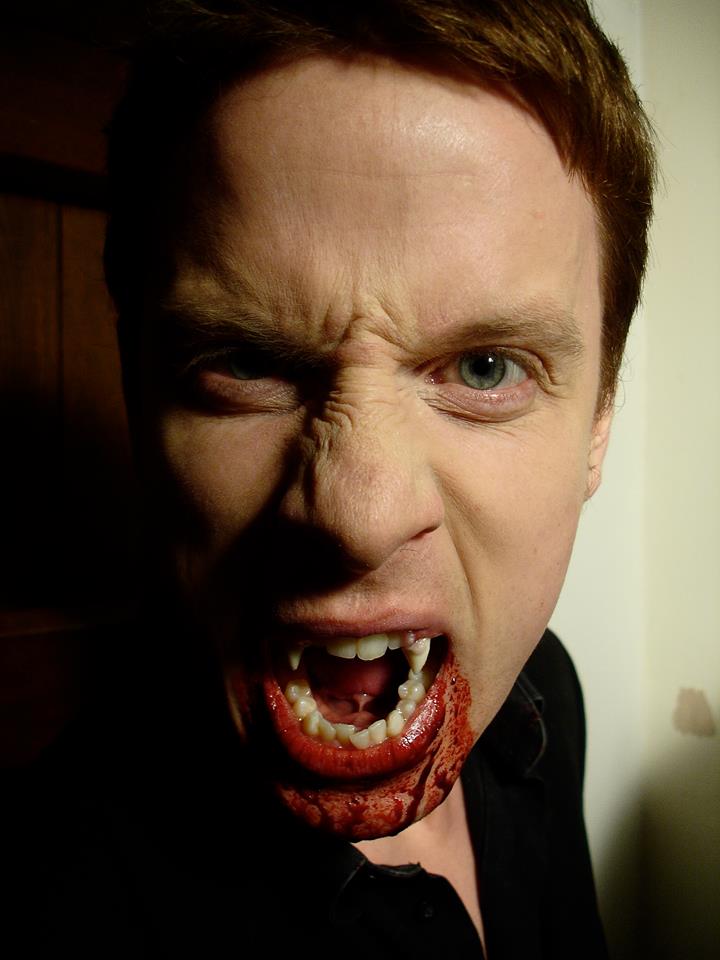 Pretty damn good is how it stacks up. Frankly it’s surprising that the now-retired Kay didn’t play more vampires in her decade-long career. She’s sort of vampiric in Forest of the Damned but technically she’s a fallen angel in that one and she’s a threat, ‘the monstrous other’, rather than a protagonist. With the right make-up (or lack thereof), Marysia can do that pure Scottish takes-me-a-week-of-tanning-to-get-white thing. A fantastic make-up job by Helen Gant (Surviving Evil) and Sophie Liddiard (Chemical Wedding, Book of Blood) transforms Jane over the course of 78 minutes from a wan, pale shell to a confident, powerful, strong woman who match the devilishly handsome Seth in the glamour, ahem, stakes.

Blood + Roses is quite sensual in places, with some passionate scenes that are ambiguous about whether they are reality, fantasy or flashback. There is a reasonable amount of blood, including a slit throat near the end which will satisfy the gore-hounds. And there is a vase of roses in the third act, for the pedants. Particularly impressive is Simon Aitken’s skill, as both director and editor, in showing us how Jane’s senses and reactions become enhanced by her new state. There’s a lot more to it than just putting curtains up over the windows. The cinematography of Richard J Wood (Stag Night of the Dead; also credited as second unit director) and sound design of Marcelo Fossá (Benny Loves Killing) also contribute to this.

The leads are all strong, some of the supporting performances less so. Jane and Martin’s friends are Alice (Pamela Flanagan) and Ted (6’6” Adam Bambrough who towers over Marysia and has to bend down to get through doorways). Also on screen are Elizabeth Knight (who starred alongside Marysia in White Admiral) and Ravenswood director Marq English – and I was absolutely delighted to see Soulmate director Axelle Carolyn in the prologue. Many of the cast and crew worked with Simon Aitken on his earlier shorts. 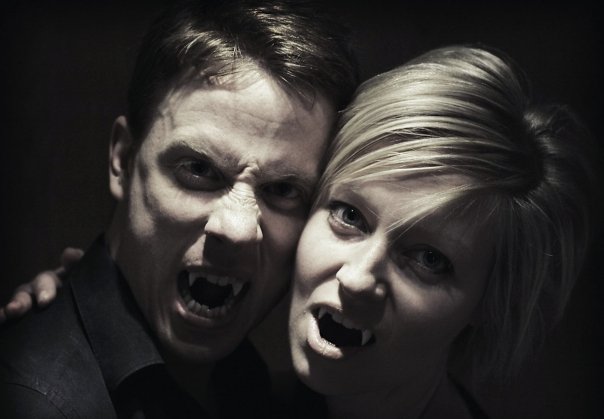 Stephanie Odu (Jack Says) handled production design and Eleanor Wdowski does a cracking job on the costumes front. I don’t know where Seth’s shirt came from but I want one. The make-up effects were provided by Brendan Lonergan who has worked in various capacities on Resident Evil, The Mummy Returns, Death Machine and Alien3. Lee Akehurst (director of Dark Rage, producer of Exorcism) helped with the camera-work. Jon H Orten (Benny Loves Killing) provided the score. Also a special shout-out to colourist Rob Wickings whose credits include Dracula 3000, The Notebooks of Cornelius Crow and Last of the Summer Wine!

One of the most interesting aspects of Blood + Roses, which only occurred to me while typing this review, is that it’s that relatively rare thing, a vampire movie with no vampire hunter. No-one fights back against Seth or Jane, no-one even really acknowledges that they are vampires. It’s not the first vampire picture to eschew use of the V-word but that is definitely a good idea here where any dialogue along the lines of “You… you’re a vampire!” would have been cheesy, inappropriate and ultimately deleterious. 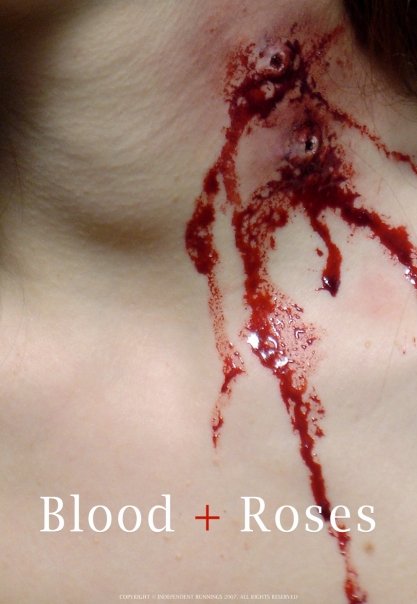 Shot over three weeks in November 2007 – plus a second shoot eight months later for the prologue – the film premiered at the 2009 Frightfest. Simon Aitken self-released the picture on US DVD in February 2011 through his Independent Runnings company, and it appeared on VOD in December of that year. In October 2014, Aitken made the film available on YouTube for one month, and also released to YouTube the DVD commentary (Aitken, Woodiwiss and Green) over a slideshow of stills. At the time he was raising funds for his projected second feature, a rom-com anthology called Modern Love.

As a modern, serious, British vampire feature, Blood + Roses falls into a subgenre that also includes Night Junkies and The Harsh Light of Day. Among all the ghosts, psychos and zombies of the British Horror Revival, it’s good to touch base once more with the undead.