I never got to interview Filipino film-maker Bobby A Suarez, worse luck. I was hoping to contact him after I had complete my review of The Return of the Bionic Boy, only to discover that he had passed away only a few months earlier. So, by way of both replacement and tribute, here is the e-mail I received from him after he read my review of Female Big Boss. It goes a reasonable way towards explaining his ideas, views, history and (unrealised) ambitions. The photo shows Bobby with Aussie cult movies expert Andrew Leavold, who did get to interview him. 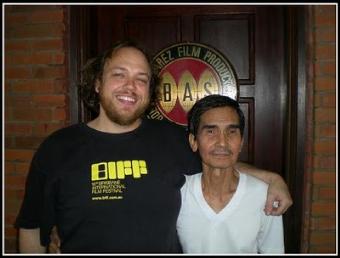 This is Bobby A. Suarez, the Filipino producer and director who has a good international track record and who after more than 8 years of hibernation and self-imposed sabbatical leave, (to help my wife take care of our youngest and only daughter who was diagnosed as "autistic") I am back again with my first love – making commercial international movies.

For your further information, I was the one who produced and directed "5 cult-classic movies " entitled – "The BIONIC BOY" (El Nino Bionico), which introduced an unknown Singaporean sensation, JOHNSON YAP, in the lead role; "THEY CALL HER CLEOPATRA WONG" (La Mujer Maravilla), which launched the international movie career of another Singaporean superstar, Ms. Doris Young whom I gave the screen name - MARRIE LEE. The Cleopatra Wong cult character so impressed director Quentin Tarrantino that it became the inspiration for his "Kill Bill" movies; "DYNAMITE JOHNSON", (El Nino Bionico-II and Cleopatra Wong-II) , the movie which teamed the two Singaporeans - Marrie Lee and Johnson Yap; "DEVIL'S ANGELS" (Cleopatra Wong-III) with Marrie Lee again playing the lead role. "ONE-ARMED EXECUTIONER" (El Verdugo Manco) , the movie that introduced a Filipino actor, Chito Guerrero (whom I had given the screen name - FRANCO GUERERRO) to international audiences. "One-Armed Executioner" played opposite "Heaven's Gate" and landed No. 12 in the top 50  money-making  movies in North America.

I just sold the TELEVISION & HOME-VIDEO-DVD-INTERNET "re-issue rights" of the  above 5-cult-classic movies for NORTH AMERICA to include PUERTO RICO and MEXICO to Messrs. MPI GROUP/DARK SKY FILMS of Illinois. The said 5 movie titles (together with more than a dozen movies which I directed/produced) are at present being aired in The UNITED KINGDOM, IRELAND, ISLE OF MAN, AUSTRALIA and NEW ZEALAND via Firecracker Television of London.

I am at present discussing with my good friend, Pete of London my come back movie projects entitled:

A "different" love-story-drama about a former British Ambassador to the Philippines who in his twilight years, returns to paradise to write his memoirs and to find peace and tranquility. Instead, he finds deceit, betrayal and unbridled passion.

My good friend, Mr. JOHN PHILLIP LAW agreed and is very happy and to play the lead role opposite a young, beautiful and talented Filipina actress.

An action-packed martial-arts police drama, with my good British (Hollywood-based) actor-friend, MR. GARY DANIELS to play the lead role and to be supported by both American and British martial-arts exponents. Ms. MARRIE LEE of the Cleopatra Wong movie series' fame will play a special role.

I guess that's it for now and if you need more information from me, then please do not hesitate to contact me at the address shown below.

Attached herewith are informative data for your reading pleasure.

Thank you and wishing you and your family a MERRY CHRISTMAS and a HAPPY NEW YEAR.