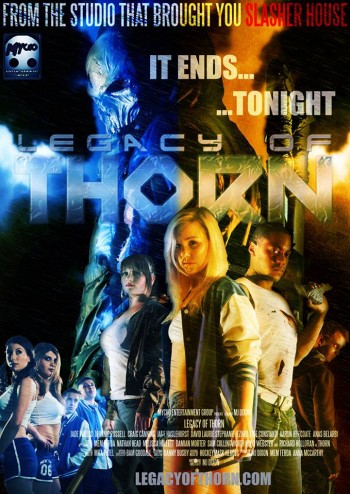 Legacy of Thorn is a prequel to MJ Dixon’s previous feature Slasher House, though you don’t need to have seen that movie and the only direct connection is a fun little epilogue. Slasher House saw Eleanor James terrorised by three hulking supernatural psychos; Legacy of Thorn features one of those in his own movie.

Thorn (who is never named) is a tall, big-built monster with a silver mask on his face and a pair of machetes somewhat smaller than the impractical, anime-inspired things he wielded in the previous film, although you still wouldn’t want to get in their – or his – way. He comes very much from the zombie/mummy/Frankenstein school of horror chasers in that no matter how fast you run, he’ll catch up with you at a steady walking pace. And then he’ll hack you to bits without any display of emotion.

Really, Legacy of Thorn wants to be a Friday the 13th movie. And there’s nothing wrong with that. On the face of it, the plot is fairly simple: a sequence of people being hacked up by Thorn, their attempts to fight back or escape largely ineffectual. But actually there’s much more going on here, both structurally and narratively. 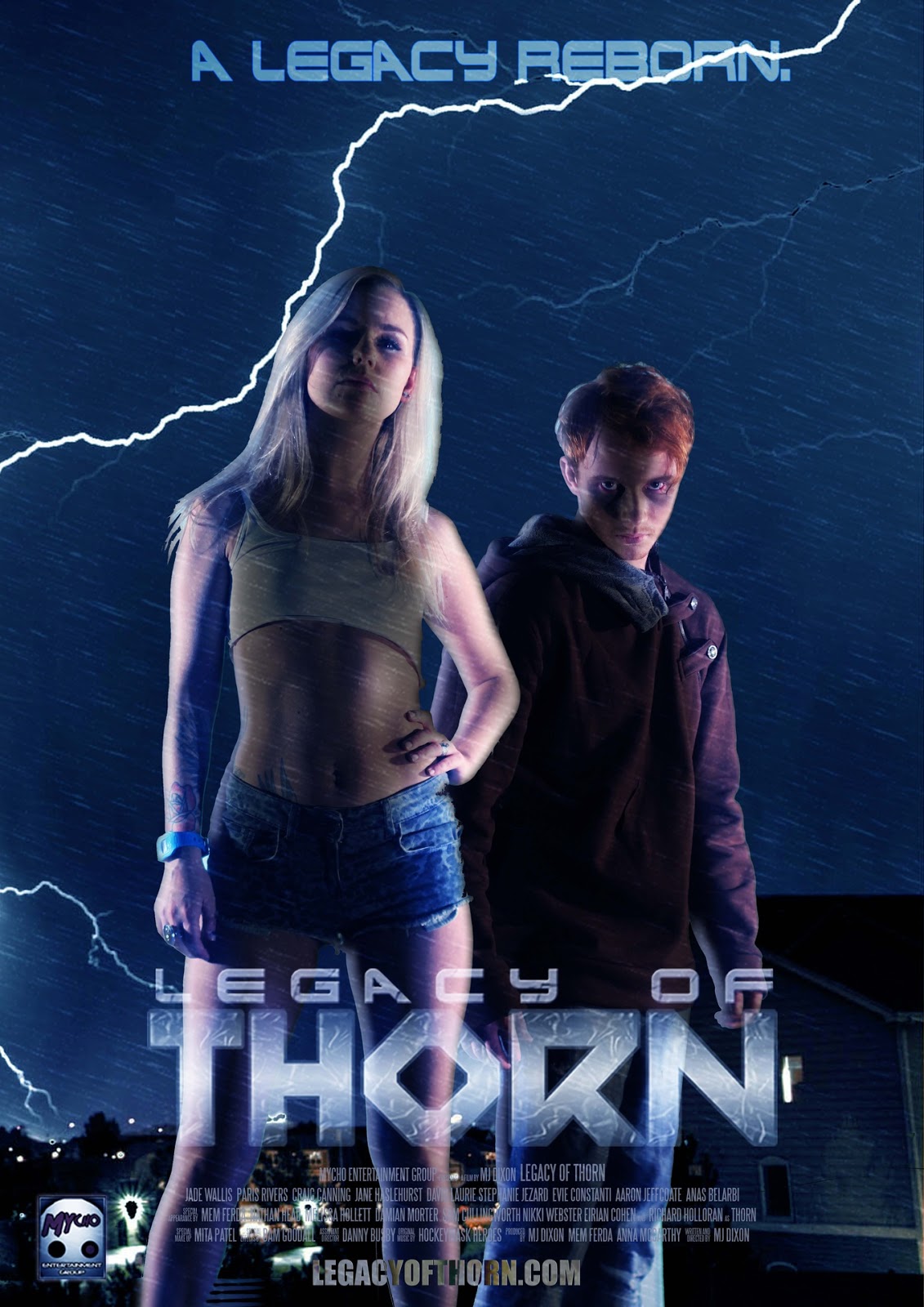 Four young people manage to subdue Thorn (through the first of several electrocution scenes, all of them rendered somewhat unbelievable due to the guy’s thick-soled rubber goth-boots), remove his mask and chain him up. There’s blonde Jess (Jade Wallis, a model/actress who was in Danny Cotton’s short Revenge of Death), around whom the plot revolves; busty brunette Alice (rising horror starlet Jane Haslehurst who was in Philip Gardiner’s Exorcist Chronicles and Dead Walkers: Rise of the 4th Reich, as were several other cast members), muscular black guy Eric (Paris Rivers) and skinny white guy Clark (Craig Canning, also in those two Philip Gardiner pictures). The two fellas were respectively boyfriend and brother of one of Thorn’s previous victims. Once the monster is restrained – and humanised – the previously clear-cut morality of killing him becomes a little fuzzier, leading to some splendid scenes of character conflict.

This all takes place on 29th February 2012. Intercut with the 2012 story is a series of scenes that occurred exactly four years earlier, on the previous Leap Year Day, involving the same characters plus others. It took me some while to realise – and I felt greatly rewarded when I did realise this – that in an audacious conceit Dixon is presenting the 2008 scenes in reverse order. So that, as one strand of the narrative progresses forward, the other gradually peels back layers, showing us how our characters came to be in the situation in which we first meet them. Eventually, the 2008 story will roll back far enough to reveal the truth behind what’s going on. Or at least hint at it. 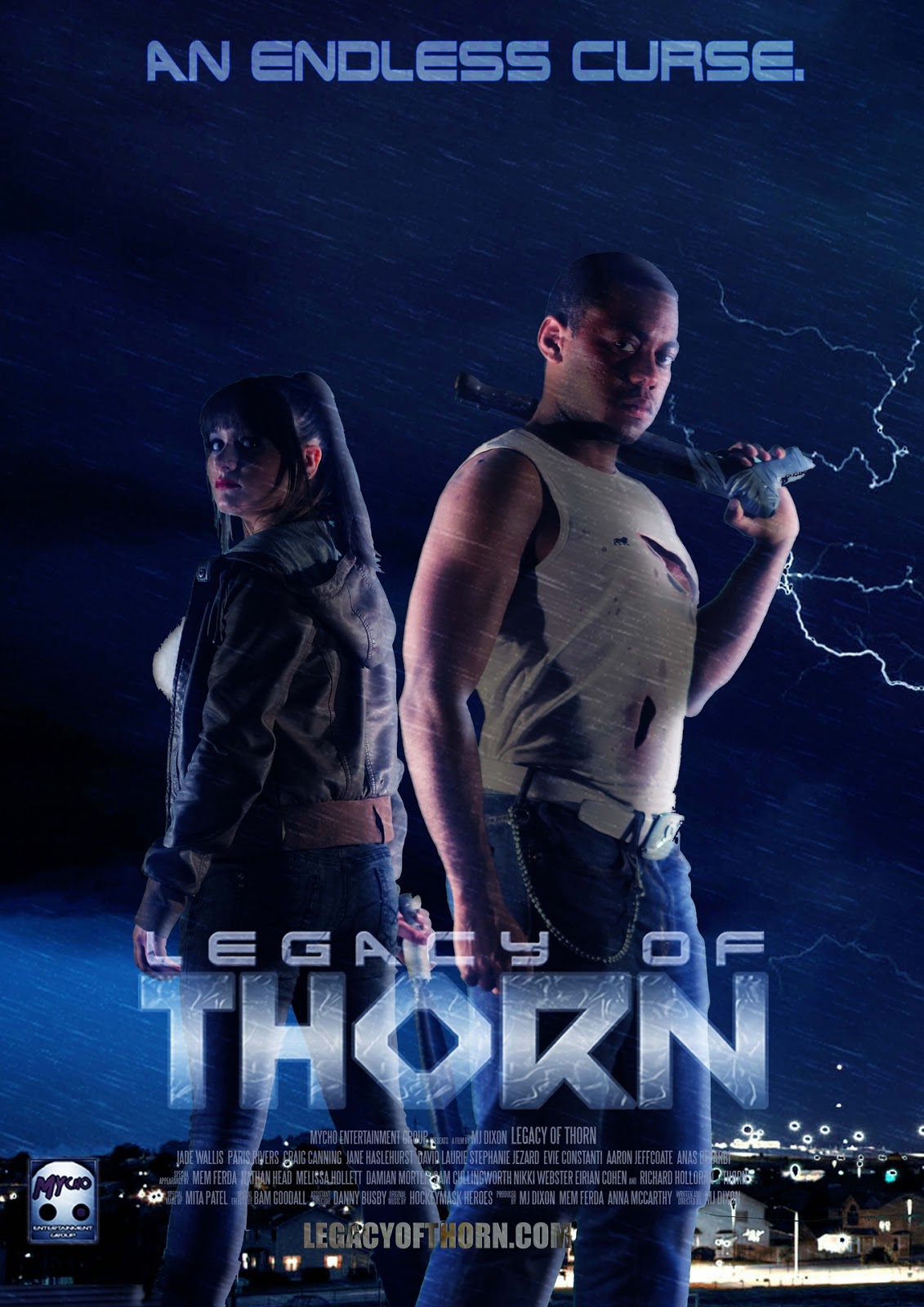 In 2008 the characters are 16 and, somewhat bizarrely, seem to be at an American high school – where the girls are cheerleaders and the guys are jocks – even though all the characters are British. That’s an obviously deliberate disconnect which heightens the unreality of this far from realist film. We meet Clark’s sister Becca (Stephanie Jezard, also in ‘psychological urban western’ The Profesional [sic]) and queen bitch school bully Sally (a cracking performance from Strasberg-trained Evie Constanti) plus arsehole jocks Zach (Aaron Jeffcoate: Molly Crows) and Tommy (Anas Belarbi). But because of the reversed chronology, we generally meet people as they die, and then discover how they came to be where they were. It shouldn’t work, but it does.

On top of all that, there are a number of scenes of police squads attempting to take down Thorn, and a few brief hints at some sort of secret cult, identifiable via tattoos, acting on Thorn’s behalf. That might be a story which is explored further in the promised follow-up, Wrath of Thorn.

Dixon, who likes to be credited as ‘Mj Dixon’ is largely a one-man band, handling cinematography, editing, music, design and multiple other chores. In some areas he was assisted by producer Anna McCarthy, 1st AD Daniel Busby, VFX supervisor/gaffer John ‘Bam’ Goodall (who plays a creepy janitor) and helping hand Paul Malcolm Swindells in various combinations. Despite this, a clear idea of the communal, everyone-pitch-in-together nature of the production is evident in the preponderance of cast names among the crew credits, often en masse. Craig Canning is credited with stunt co-ordination and Mita Patel (Zombie Run, The Fall of Rothan) with make-up. 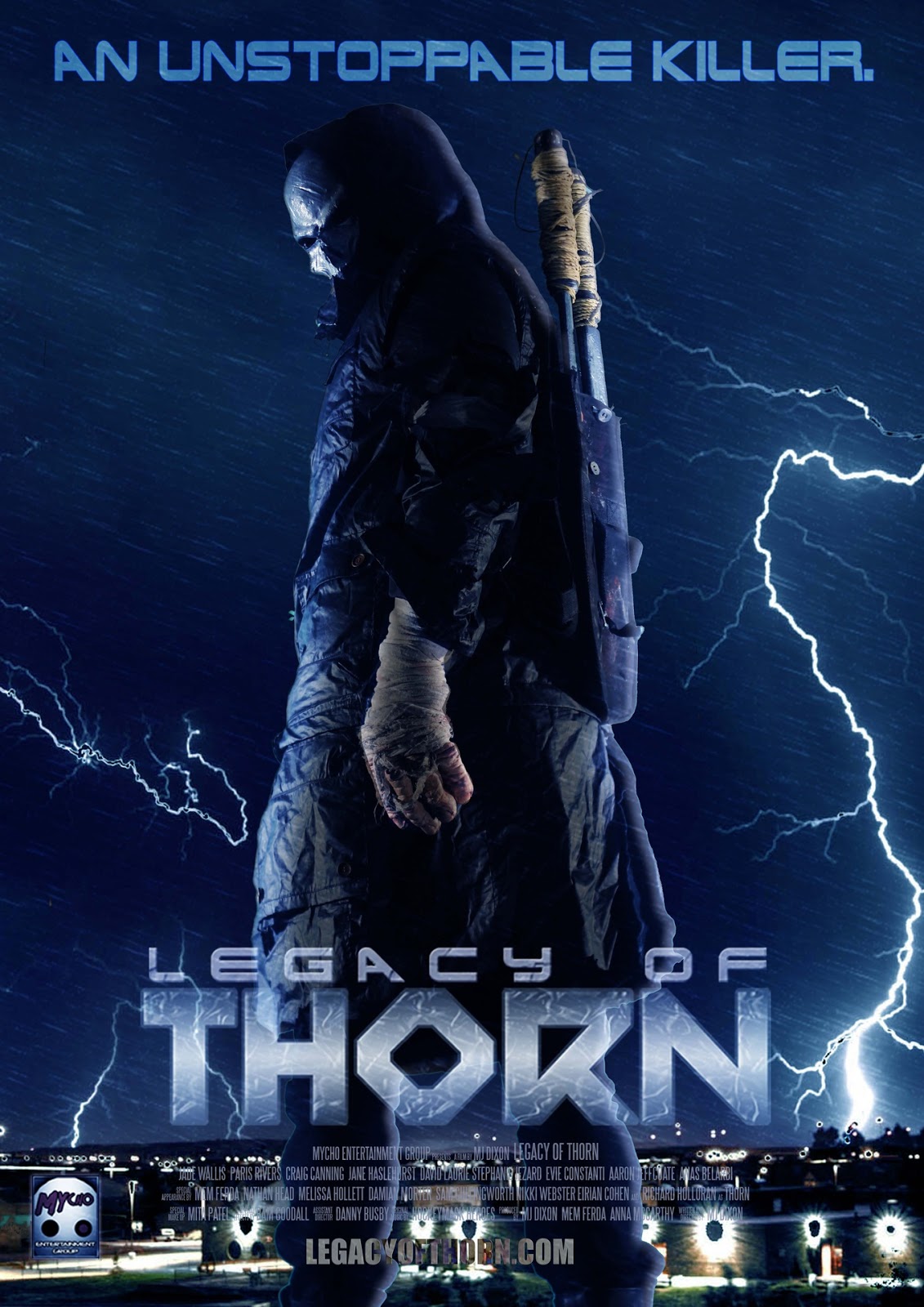 When ‘Mj’ made Slasher House, he went for a red/green aesthetic so extreme it could be mistaken for two-strip Technicolor. On this film, blue is the predominant colour, with splashes of orange. It’s a more effective colour scheme but doesn’t diminish the stylish look of the photography which is a step above many similar (or at least, similarly budgeted films). This is actually Dixon’s third feature, including the still unreleased Creepsville; before that he made a few shorts including Thorn, a 2009 pre-feature try-out which won a competition at scaryordie.com and which has effectively been remade as the first part of the 2012 story here. There is a clear progression from Slasher House to Legacy of Thorn as the director builds on his own experience and hones his craft while establishing an idiosyncratic style which marks him out as One To Watch in British horror cinema.

If there’s a mis-step here – and I’m being picky – it’s the decision to frame this in a rather extreme ratio which doesn’t benefit the picture. This isn’t a film of wide landscapes or even Kubrick-ian corridor shots, it’s teenagers running away from a seven-foot psycho-demon and too often heads or legs are unhelpfully truncated. Also, in all honesty, some of the ADR is less successful than others. For example there’s a scene at the end by a river, clearly filmed on a very windy day, and the looping is so obvious it threatens to distract from the actual words being looped.

Nevertheless, I would be lying if I said that I didn’t enjoy Legacy of Thorn very much. It’s full of action, blood, violence and tension without sacrificing character or story, a tricky balance to pull off, especially when also lighting every scene like the bastard son of Mario Bava. 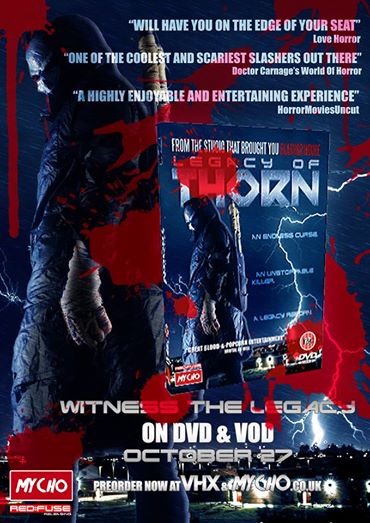 Thorn himself (a character conceived by Dixon as a reaction to the watering down of Jason Vorhees and Michael Myers in later sequels) is played by Richard Daniel Thomas Holloran who was the Demon in Slasher House (where Thorn was played by a different actor). Mem Ferda (Experiment, Revolver, Ill Manors) as a detective - also a producer - provides the closest thing to name value. Legacy of Thorn is dedicated to actor/photographer Dave Laurie who has a significant role as the mysterious Isaac but who passed away before the film was completed.

Shot over 18 days of production in Oldham and Preston in 2013/14, Legacy of Thorn premiered at The Living Dead Con in Liverpool in October 2014 a week or two before its DVD/VOD release. Impressive, ambitious and largely successful, not to mention unashamedly entertaining for all gorehounds – especially those looking for something with both style and substance – Legacy of Thorn is definitely worth seeking out.