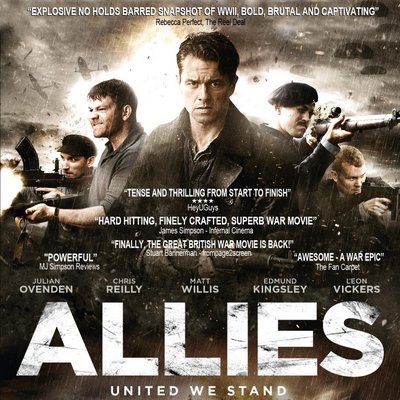 There aren’t many proper war films made nowadays. Sure, there’s the occasional one but it’s hardly a genre the way it used to be. All through the 1950s and 1960s and into the early 1970s, war films were big business. Mainly because there was so much hardware left over from World War II that enormous production value could be had pretty much at the drop of a tin hat. But eventually that resource dried up, the average movie-goer was too young to remember the War, and everyone became interested in robots and aliens and spaceships and shit.

Nowadays, a new war movie is a bit of an event, a new British war movie even more so. A new low-budget independent British war movie – almost unheard of. There have been a handful of war-themed entries in the British horror revival: The Bunker, and Stuart Brennan’s The Lost and I suppose Nazi Zombie Death Tales, but those were all horror movies with a WW2 setting. That’s something different.

Dominic Burns has his own share of horror/sci-fi credits including Cut, Airborne and UFO, as well as acting gigs in The Reverend, Kill Keith, Strippers vs Werewolves and Cockneys vs Zombies, plus a producer credit on Devil’s Tower. But put all thoughts of escapist fantasy aside because with Allies Burns shows that he doesn’t need aliens or psychos or monsters to prop up his movies. This is an honest-to-goodness, completely serious, down-the-line war movie: a great British war movie of the sort that they simply don’t make them like any more. 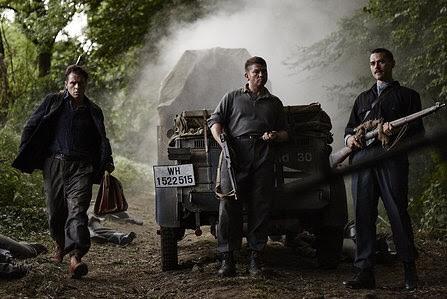 In 1944, as the Germans gather their forces to counter-attack in what would become known as the Battle of the Bulge, a close-knit team of four British Commandos are sent behind enemy lines, under the command of an American Officer. Their mission: capture some vital German maps and get back behind Allied lines. How they get back – and how many of them get back – is the plot in a nutshell. To say more would be to spoil a wonderful, powerful film.

Julian Ovenden (Foyle’s War, Downton Abbey) is the Yank, despite being British; Chris Reilly (Suspects) is McBain, the gruff, Scottish Sergeant who takes an instant dislike to him. Matt Willis (from Busted!), Edmund (son of Sir Ben) Kingsley and Leon Vickers (Reverb) make up the rest of the squad. All are excellent in their roles and there is a real sense of camaraderie among the British, complemented by distrust and antagonism (to varying degrees) towards their new American CO.

The strength of Burns’ script and film lies in the way that it successfully combines powerful, war-is-hell, human drama with Boy’s Own sock-it-to-the-Nazis excitement. Characters we care about do get killed, and there are unflinching images of both British and Germans agonisingly injured during the fight scenes. This is no cheesy glorification of war, yet for all that, it’s still a rollicking adventure. That is the dichotomy of war that the best war films capture and reflect. The Germans here are vicious, sadistic brutes – except the ones that aren’t. The French Resistance are brave freedom fighters, but also callous and cold-blooded. The British are chipper and loyal, but that’s no protection against a bullet. 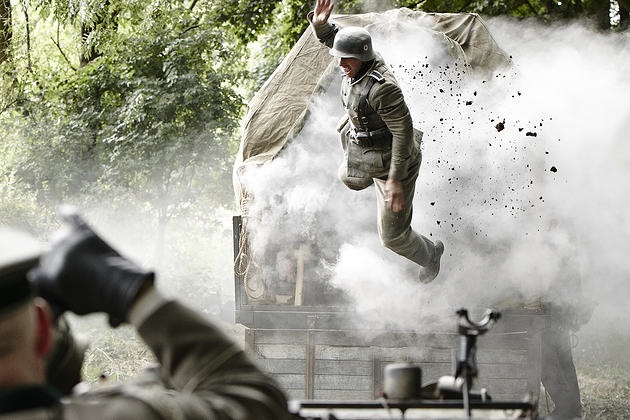 Shot on an obviously low budget, Allies nevertheless punches vastly above its weight in terms of on-screen production value. Judicious use of re-enactor groups to provide extras, costumes, props and vehicles (up to and including at least one tank) means that we are never distracted by the film-making itself. I’m no military history nerd (well, I am – just not a massive nerd) but this all looks right to me. The haircuts look right, the dialogue sounds right. The Derbyshire countryside does a great job of standing in for France and I didn’t spot any TV aerials or burglar alarms anywhere; some combination of careful framing and/or digital removal keeps all the buildings looking like rural Europe in the 1940s.

If there’s a misstep, it’s the ending and the resolution of a sub-plot, back in Blighty, about a traitor. The revelation of the traitor’s identity simply isn’t believable at all and I would have preferred a bleaker, more open-ended resolution in which we simply never find out who it is so our protagonists have no way to know if such treachery will happen again. The above notwithstanding, the film as a whole is so well-constructed and presented that the plot is carried across this brief lack of credibility and anyway we’re soon back in France with one of our heroes racing across the fields on a motorbike. 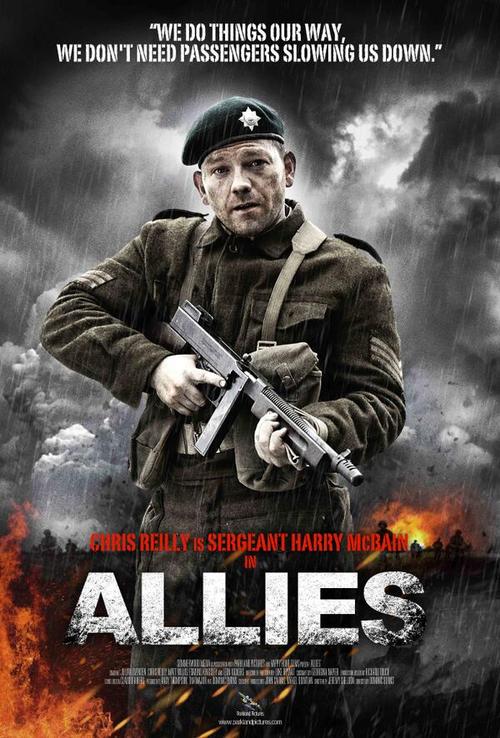 A fine cast includes Erich Redman, who has made a career out of playing German soldiers in films like U-571, Charlotte Gray, Two Men Went to War and Captain America: The First Avenger. He was also in Elisar Cabrera’s Demonsoul, if anyone’s keeping score. Werner Daehn, by contrast has mostly worked in his native Germany although that hasn’t prevented him from racking up a number of war credits including not only Valkyrie but also a 2004 TV movie on exactly the same subject, Operation Valkyrie. Other Germans are played by Allistair McNab (Green Street 3, Devil’s Tower, The Last Showing), Jason Thomas Brown (Wasteland) and Dean William (Soul Searcher, Left for Dead, The Silencer). Recognisable faces/voices on the British side include Thomas the Tank Engine narrator Mark Moraghan, The Bill’s Steven Hartley and busy character actor Paul Ridley whose credits stretch back to Blake’s 7, The Tripods and, ironically, two bit-parts as Germans in Secret Army. Jessica Messenger (Dark Watchers: The Women in Black) pops up as a nurse at the end.

The Resistance cell is led by former Chelsea/France centre back Frank Laboeuf and the love interest is provided by Emmanuelle Bouaziz from Chante, a sort of contemporary French version of Fame marketed internationally as Studio 24. David Sterne, who plays her grandfather, is a veteran actor with five decades of great credits including Sinbad and the Eye of the Tiger, Talos the Mummy, A Knight’s Tale, Harry Potter 4, Pirates of the Caribbean 2 and the Jack Black Gulliver’s Travels, as well as BHR entries Blood Moon, Dorian Gray and Truth or Dare.

Burns co-wrote the script with Jeremy Sheldon, a former script-reader for Miramax and others who now teaches screenwriting at Birkbeck. The two share story credit with James Crow whose own debut feature The Witching Tree is currently in post. My old mate Jake West directed Second Unit and Tower Block helmer James Nunn was 1st AD on some pick-up shots. Emma Biggins, producer of The Harsh Light of Day, served as production manager. DP Luke Bryant (Kill Keith, UFO) and colourist David Tatchell (Feed the Devil) do a grand job, draining much of the colour and muting the tones to the sort of grey-ish, dull-ish, brown-ish feel that we associate (rightly or wrongly) with the period. Tatchell also provided more than a hundred VFX shots including a parachute drop from a Dakota. 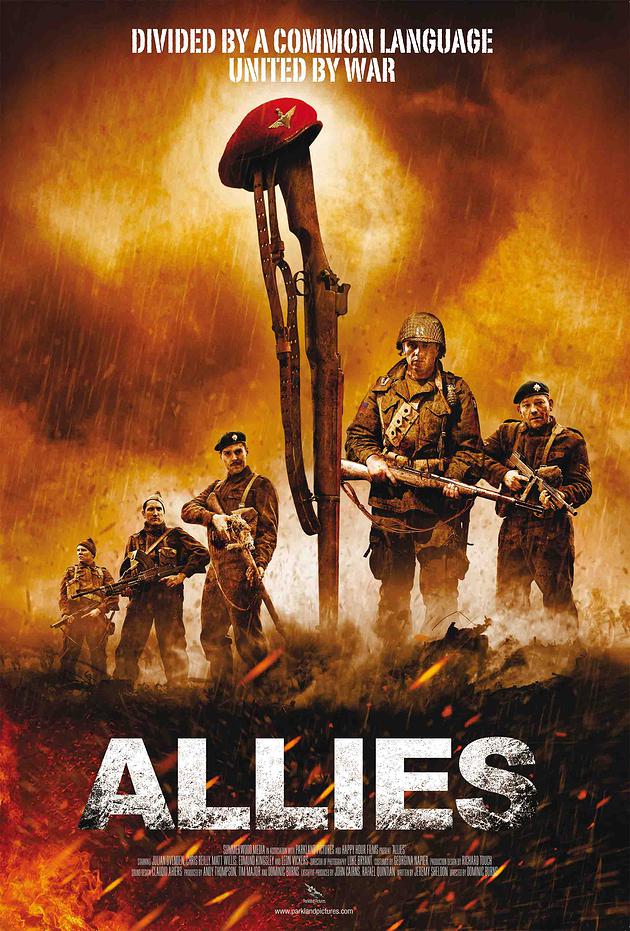 Even more crucial to making us believe this is 1944 France is the production design of Richard Touch whose credits are mostly historical documentaries, including Nazi Megastructures. (Has this been broadcast? How have I not seen this?) He is supported by his regular art director Stuart Chambers and costume designer Georgina Napier (Kill Keith, Look Around You and, in the dim and distant past, wardrobe assistant on Long Time Dead and Kannibal). Binding everything together is a suitably sweeping orchestral score by London-based French composer Philippe Jakko.

A belter of a film, Allies ably demonstrates that the independent film scene in the UK is capable of moving beyond the exploitable horrors, thrillers and action films which comprise the bulk of its output and into serious, powerful dramas. Without losing the excitement, tension and audience-pleasing edge that marks out the indie sector from the often so tiresome bombast of ‘mainstream’ British cinema. Does this mark the start of the British War Film Revival? Perhaps…