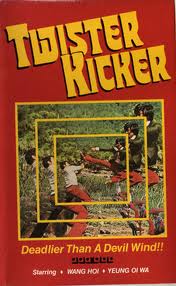 'Cover photo/image may not be from this film' says the small print on the back of the video sleeve and they're dead right on this occasion as the photo is from some historical chop-socky feature and this movie is very definitely set in the present day. However the photo on the back is from the film and the synopsis is, unusually for this sort of movie, spot on.

A guy called Chao Ming discovers that he has cancer and only has a month or so to live. At the same time, the orphanage where his girlfriend, Su-An Fang, works needs money for some reason and his godfather, Mr Ho (whom we never see) is in trouble with the law, accused of drug-smuggling. Actually, the Mr Ho subplot is never really followed up and seems completely pointless.

Su-An takes an evening job at a nightclub while Chao starts teaching martial arts at a local gym. Wanting to maximise his income while he can, he takes on a job for a local gangster which involves threatening another local gangster and telling him to clear out of town.

And, um, that's about it. Chao orders his own coffin and funeral clothes and oversees the digging of his own grave as a sort of comic subplot. There are a few lacklustre fights and eventually it transpires, to no-one's surprise, that the doctor was wrong and Chao doesn't have cancer after all. There's some sort of subplot involving another woman named Anna, and Chao lives with a comic relief friend, but that's all incidental to the fighting.

Sadly, the fighting isn't anything to write home about. There's a brief bit of interest when Chao is fighting the gangster's goons around the guy's villa after delivering his initial threat. Some nice overhead shots and creative use of a balcony mark this fight out as vaguely interesting but the other punch-ups, including one in an undertaker's shop and a final one involving students from the gym, are frankly soporific.

Despite the title there is no distinctive fighting style on display here involving either twisting or kicking. Nevertheless this is the original title, seen in a lengthy credit sequence which plays out over completely unrelated polarised footage of a guy doing gymnastics.

Not one of the cast or crew names turns up a single hit on Google, but for what it's worth the film 'stars' Yang Oi Hwa, Ding Hwa Sun, Lam Ying and Wang Hoi with Yee Hung credited as 'guest star'. the other actors listed are Sun Yat, Wang Lan, Chan Kuen and Ng Tung Chiu, the last of whom may or may not be the same as the Ng Tung Chue who is credited as 'martial arts director'.