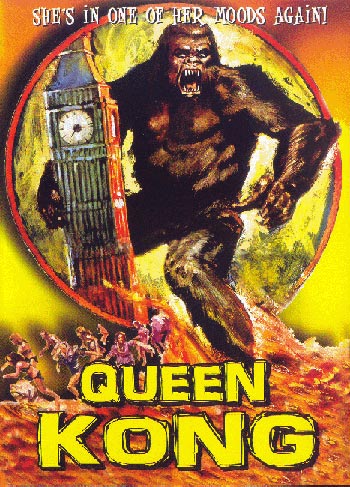 Lost films. There’s always the danger that they won’t live up to expectations. For example, those few people who ever saw London After Midnight reckon that it’s not as good as the stills promise. It therefore gives me enormous pleasure to announce that Queen Kong, resurfaced after a quarter of a century on the shelf, is everything we’d hoped for. This is a consistently hilarious film: sometimes genuinely funny, sometimes unintentionally amusing, but never, ever boring.

This is, very simply, a spoof of King Kong with the sex roles reversed. Robin Askwith is drippy hippy Ray Fay, picked by stern film director Luce Habit (Rula Lenska) to star in her new film. (Bruce Cabot - Luce Habit - oh, please yourselves...) In a nice nod to the source material, Habit spots Fay stealing an apple - a toffee apple. But the theft he actually gets in trouble for is nicking an ‘original reproduction’ poster of the 1933 King Kong. You know, just in case you hadn’t twigged yet...

Habit has a crew of saucy young ladies, all kitted out in bikinis or in halter-tops and hot pants, who stow equipment aboard their ship, the Liberated Lady (one of them is future Allo Allo star Vicki Michelle, also in Virgin Witch). In one of several genuinely witty gags, the first four crates are stencilled ‘guns’, ‘gas’, ‘and’ and ‘tranquillisers’! Eventually they reach their location - Lazanga Where They Do The Konga - and explore the jungle, which switches constantly from deciduous woodland to lush tropics due to the use of extensive and obvious stock footage. On the way they pass a bundle of sub-Carry On sight gags like a billboard exhorting ‘Drink Konga Kola’ (the uncredited girl on the board is Marianne Morris from Vampyres). 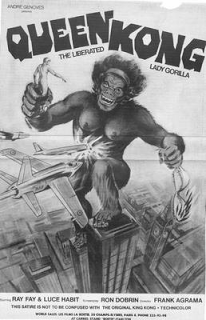 In a clearing they find a matriarchal tribe, ruled over by a bikini-clad high priestess (Hammer chick Valerie Leon, whose lines are all of the “Unga bunga wonga” variety), who grab Fay and stick him inside a birthday cake atop a giant picnic table. Queen Kong appears - a woman in a suit no worse than the one Rick Baker won an Oscar for, and mixed in via some reasonable CSO and back projection - and takes Fay back into the jungle. Along the way, this ‘liberated female gorilla’ battles a tyrannosaur which is daft-looking but, to be fair, better than the dinos in many 1950s movies, and subsequently fights an equally silly pterodactyl. Habit and her girls rescue Fay, are chased by Kong, and subdue her with gas bombs.

The giant gorilla is shipped back to London (actually a ‘model village’ tourist attraction in Hampshire!) amid a montage of newspaper headlines and sound snippets; you can clearly hear a voice say “Godzilla” at one point. She is put on display at a grand fete, in front of HM the Queen (Jeanette Charles of course!) but forced to cover herself up with a chain-mail bikini. Irritated by this, and jealous of Luce Habit’s dancing with Ray Fay, the giant ape breaks loose and goes on the rampage.

After taking Fay away from the unwelcome gropings of Habit, Queen Kong climbs Big Ben (not the Post Office Tower as usually reported; incredibly, even the normally reliable Ten Years of Terror makes this mistake) where she is attacked by the RAF. In an astonishing display of cheap film-making (or is this deliberate?) the planes are Vulcan bombers in the stock footage of them taking off and the Red Arrows in the stock footage of them in flight! By the time they reach Big Ben, they’re model helicopters! 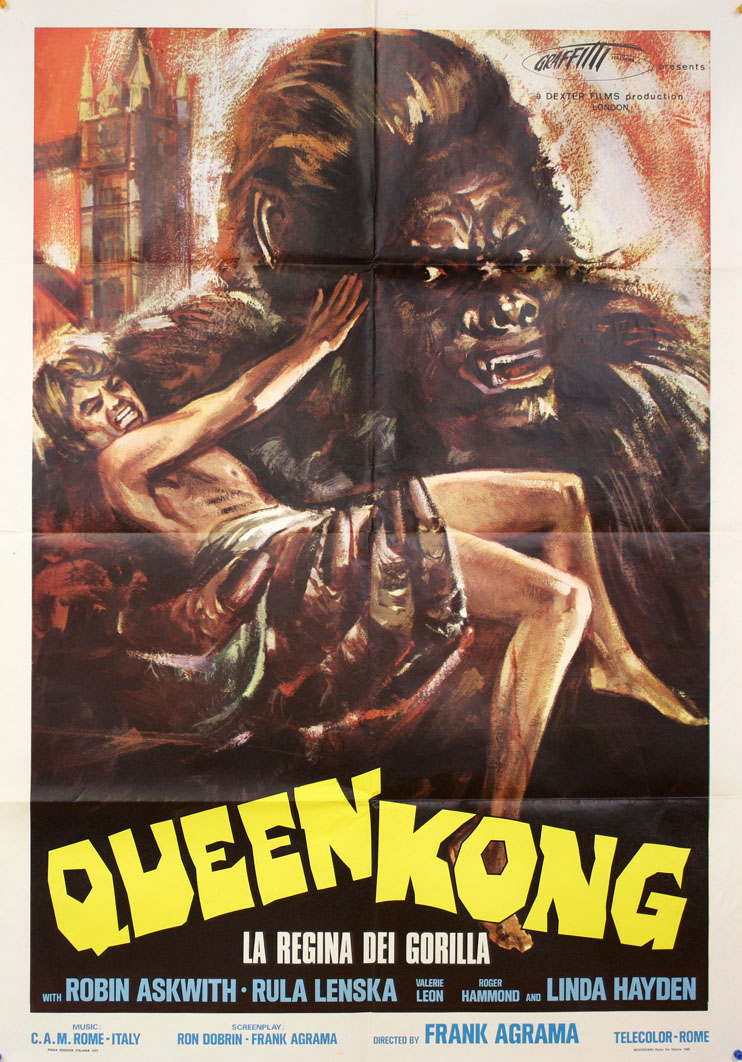 What a gloriously silly film this is. Askwith plays the whole thing like a Christmas panto and it will certainly appeal to fans of The Benny Hill Show or the Confessions of... films. It’s self-consciously cheap, even indulging in Holy Grail-esque gags like Askwith wondering what strange land the boat is nearing and Lenska commenting, “Brighton.” There are visual jokes about Jaws, The Exorcist and Airport, with Linda Hayden (Blood on Satan’s Claw) as a singing nun on a 747 knocked out of the sky by the gorilla. (“I wish that nun would shut up,” comments one passenger. “She even sang through the in-flight movie.”) There are also some astounding shots which are real Ed Wood-style, one-take-will-do corner-cutters, as actors trip over their lines: one minor character - played by 73-year-old comedy veteran Harold Berens (What a Whopper!, Straight on till Morning) - consistently says “sixty foot four gorilla” instead of “sixty-four foot gorilla.” Everyone involved seems to know this is awful and deliberately cheesy but even they can’t have imagined how cheesy it would turn out. 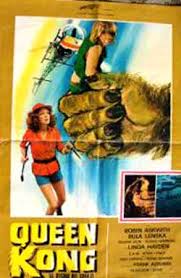 So why was this a lost film? Well, it was made in 1976 to take advantage of the publicity surrounding Dino De Laurentiis’ awful remake. De Laurentiis and RKO, as makers of the remake and the original King Kong, claimed copyright infringement and eventually settled out of court with Agrama (director of Dawn of the Mummy, often cited as an Italian but actually an Egyptian Jew). Agrama agreed not to distribute the film and it remained unseen until bootleg tapes started circulating in 2001. (One thing that is probably completely lost by now is a dream sequence, mentioned in Askwith’s autobiography, in which Queen Kong wishes she was the same size as Ray Fay and performs a dance routine around a house and garden.)

Queen Kong was released in Japan (theatrically!) in 2001 and is now available on R1 DVD from Fred Olen Ray’s releasing outfit Retromedia, including a trailer and a commentary of Ray interviewing Agrama. While the trailer is interesting and the widescreen transfer is better than an nth generation, full-screen bootleg tape, sad to report that the commentary is one of the worst I’ve heard. Agrama hasn’t seen the film in over 25 years and can recall little - which is understandable - but Ray hasn’t done his homework on the film and so is unable to prompt him. There are no anecdotes from shooting, and Agrama’s discussion of the film’s legal problems is swift and shallow, though he does claim - and this seems to be accurate - that the film was theatrically released in Italy in 1977.

Neither Ray nor Agrama can identify any of the actors apart from Askwith, Lenska and Leon, and neither of them knows what any of them did before or since. Agrama even makes the ludicrous claim that Lenska, a jobbing actor on stage and screen since the early 1970s and star of the 1976 smash hit series Rock Follies, was “basically a fashion model” when he cast her! Ray misidentifies Linda Hayden as Scars of Dracula’s Jenny Hanley and this mistake is repeated on the packaging which also cites Askwith as a Hammer star - though he never made a Hammer film in his life.

It’s disappointing to find that there is absolutely no background information on cast and crew and almost no information on the film, with most of the comments simply describing what is happening on screen, what is about to happen or what has just happened (the track seems to be lagging about a second behind the picture). And after about halfway the two men simply run out of things to say and very large sections of the film have no commentary at all; worse still the soundtrack level is not raised in these sections so one is left effectively watching the film with the sound turned down (though some might argue that’s the best way).

The only interesting points made are: the woman in the seat in front of Linda Hayden is Agrama’s wife; for some audience shots at ‘The Queen Kong Show’ the numbers were doubled by shooting split screen, with the same people on both sides (this is just about visible when it’s pointed out); and Agrama - who is, frankly, full of it - believes the film was shot in 1970-72. Ray sounds surprised but accepts this until ten minutes later when the film reaches the Jaws spoof and he tactfully points out that that film wasn’t released until 1975.

Disappointing commentary aside, the R1 DVD is the only legitimate way to see this amazing film (unless you can get your hands on the Japanese disc of course) and is therefore indispensable. Full marks to Fred Olen Ray for releasing this, but could-do-better on the commentary.

And I haven’t even mentioned the songs: “Burn your bra, burn your panties! Call your ma, call your aunties! Step aboard - the Liberated Lady!” Unbelievable...