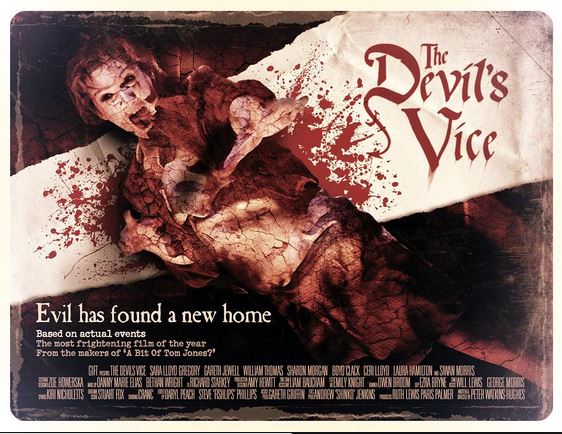 The Devil has had a lot of things within the British Horror Revival. He’s had a Playground, a Harvest, a Tower, a Chair, a Bridge, a Tattoo, a Curse, some Business, a Bargain, a Backyard, an Interval, a Punch Bowl, a Primate, another Harvest and of course some Music. Not to mention a monthly helping of Porridge. Now he’s got a Vice, which should sit nicely in The Devil’s Workshop alongside The Devil’s Lathe and The Devil’s Ratchet Screwdriver.

Nah, I’m messing with ya. Actually The Devil’s Vice turns out to be a damn creepy modern ghost story which combines supernatural, psychological and social horror to impressive effect. Sara Lloyd-Gregory and Gareth Jewell give a pair of magnificent performances as Susan and Richard, a young couple living in a converted Victorian school near Abergaveny.

A terrible accident at the start of the film leaves Susan recuperating at home, where noises and moving objects very quickly demonstrate that the couple share the building with more than a few bats and mice. The evidence suggests that a former schoolmaster, noticeable in an antique photo that Richard finds in the loft, is still there. From bad dreams and self-closing doors, the manifestation of the ghost’s presence escalates to full-on physical violence against Susan. What does the ghost want? How can it be allayed? A visit by a local psychic is not only inconclusive and unhelpful, it actually makes things even more alarming. 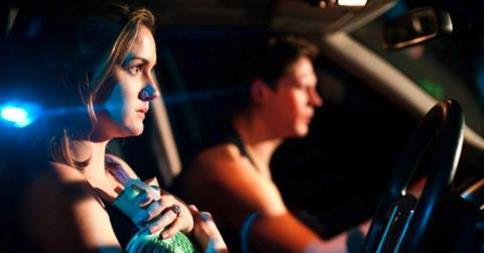 Throughout his wife’s trials, Richard is supportive and helpful, but we can see that he has the same nagging doubts as us. Is this all in Susan’s head? Is she smashing the plates and perhaps even self-harming? Jewell’s portrayal of a supportive but confused husband perfectly complements Lloyd-Gregory’s alarmingly physical and often terrifying performance, which involves several scenes of physically throwing herself around as the ghost brutally manhandles her. Then again, does Richard know more than he’s telling? Could this be a variant on the old ‘fake haunting to drive my wife mad’ schtick?

The resolution, though undeniably powerful, is, truth be told, not unexpected, even if one hasn’t read about the film’s background (I recommend saving everything except this review until after viewing). Which is not to say that (a) it’s not the correct resolution, or (b) the film is lessened in any way. The film was produced specifically to make the point made at the end. But actually what I really liked is the fact that the resolution doesn’t explain everything we've witnessed, so maybe there is more to what is happening than we can see, which may or may not be supernatural.

Writer-director Peter Watkins-Hughes expertly handles the subtleties of a traditional British ghost tale within a modern setting, creating a believable situation predicated on a fantastical notion. There is just one curious mis-step about halfway through when Susan, leaving a library, meets her friend Helen (Siwan Morris from kid-horror Wolfblood). Susan’s lack of reaction suggests that she doesn’t recognise Helen, and for several minutes the viewer is unintentionally wrongfooted, thinking there might be more to the mystery/conspiracy behind all this than there really is.

I must also confess to being distracted by wondering how a young couple could afford such an obviously very expensive home. The school house is large and has been converted into a fantastic modern home with all mod cons. We are never told what Richard and Susan each do for a living (and they have no kids) but it still seems a disproportionately extravagant location. That said, this is Wales and a quick online check shows the house (now owned by one of the film’s producers) is worth about £300,000 give or take, which is not as much as I expected, but still a lot for a young couple who otherwise display no sign of affluence..

The supporting cast includes William Thomas and Sharon Morgan, who were Gwen’s parents in Torchwood, and Boyd Clack, whom I recognised from Andrew C Tanner's Masterpiece.

Pete Watkins-Hughes has made some previous half-hour films which took a similarly oblique approach to social issues, including Loserville, a story about homelessness featuring Matt Berry and Denise Welch, and Bloody Norah which explored self-harm and featured Gareth David-Lloyd. He also directed a little-seen comedy feature called A Bit of Tom Jones about a man who believes he's buying a (very significant) part of the Welsh singer. Many of the crew from those films also worked on The Devil's Vice including DP Ezra Byrne and editor Richard Starkey.

The film was funded and commissioned by the Gwent Independent Film Trust (GIFT), with many of the crew coming from the University of South Wales. Scenes of Susan's recuperation in Nevill Hall hospital add massively to the perceived production value. 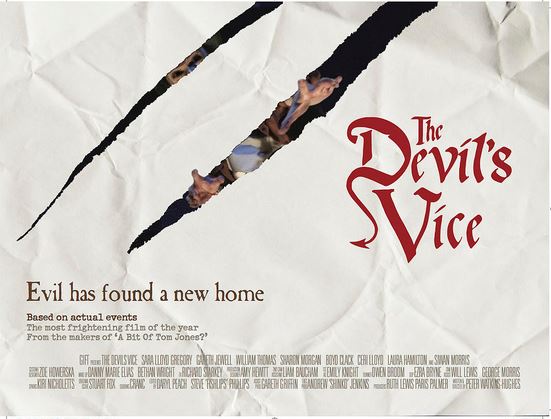 Originally set to debut on BBC One Wales in October 2014, the broadcast was for some reason bumped back by a month. Of course, there was a time when regional TV programming like this led to forgotten obscurities, only ever seen by a handful of people. But nowadays folk throughout the UK can get BBC One Wales on cable and in any case the film then reposed on iPlayer for a month, giving everyone a chance to watch it.

Ghost stories are very much in vogue at the moment in British horror and The Devil's Vice is an excellent example of the genre, in addition to having an important social message.