The Slayers: Portrait of a Dismembered Family 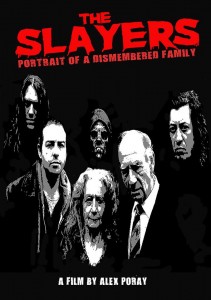 The Slayers has an original and intriguing premise with lots of potential, almost all of which is squandered by a combination of poor acting, lacklustre direction, threadbare production values and a script within which both plot and characterisation could be most generously described as sparse. Above all, it is hobbled by its own desperately low ambitions, apparently believing that simply ticking the boxes marked ‘violence’, ‘drugs’ and ‘satanism’ doth an effective horror film make.

The patriarch of the eponymous clan is the Rt. Hon. Stanley Slayer (David Poulter – not the organist!), whose honorific technically means he’s a serving member of the Privy Council and therefore a Peer or a current or previous MP, although no mention is made of any political allegiance or Government position and I suspect ‘Rt. Hon.’ has been used here just to make him sound posh. He has a wife and four adult sons of whom Patrick Slayer (director Alex Poray under the nom de screen ‘Lexray’) is the black sheep. 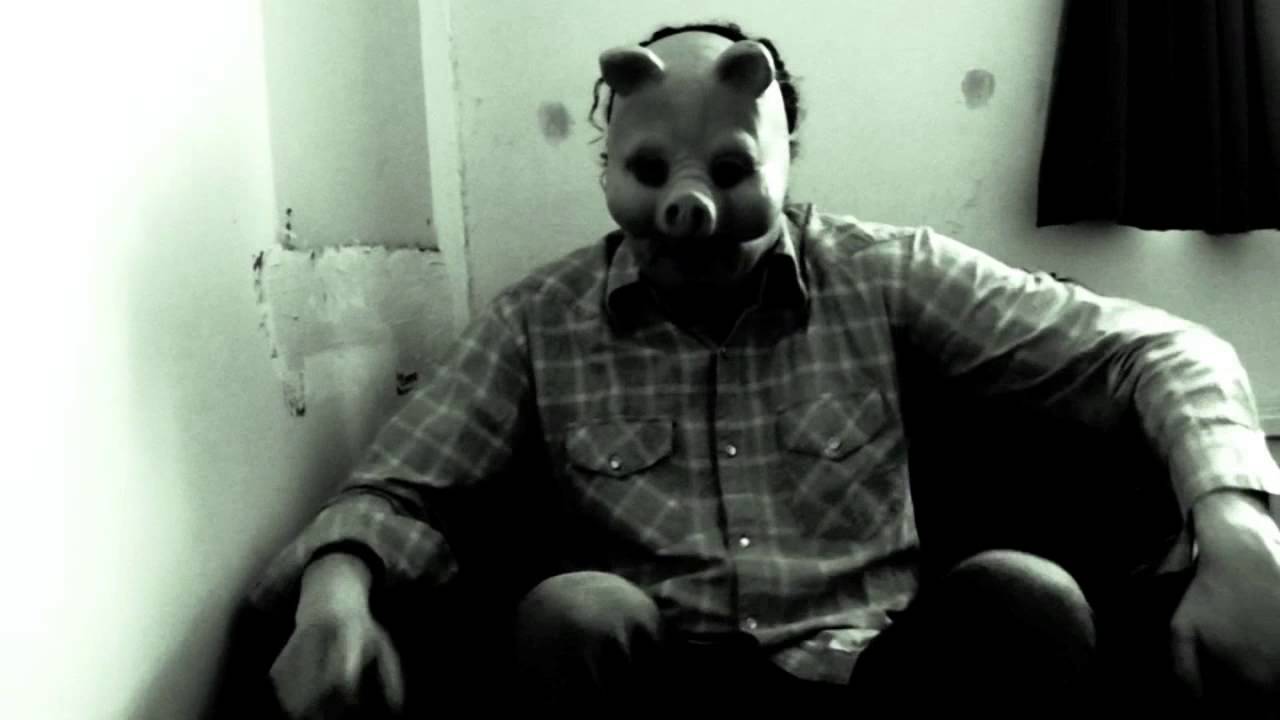 The premise is that Patrick claims his family abducted and murdered a young woman named Anna Thompson, indulging in a spot of witchcraft and cannibalism on the side, and that there have been other (unnamed, non-specific) murders since. Stanley maintains that Patrick is a drug addict with mental health issues and is consequently delusional. Apart from anything else, the police have no record of a missing person named Anna Thompson. Patrick in return maintains that his father is such a powerful man that he has been able to impose a high-level cover-up. Patrick actually has footage which he himself shot, showing his brothers kidnapping Anna (Donna Beeching) and then his father sacrificing her to Satan. Stanley says that this is a fictional horror film which the family made for a lark, at Patrick’s suggestion.

The resultant mockumentary combines Patrick’s footage with interviews with both men (but not Mrs Slayer or any of the other sons). A film like this has the potential to be thought-provoking meta-fiction, questioning the audience’s values and morality by raising the spectre of the difference between fake footage claiming to be real and real footage claiming to be fake, all within an overall cinematic package which we know (or at least, assume) to be fake even though it presents itself as real.

I’d pay to see that. But that, sadly, is not what we get here. 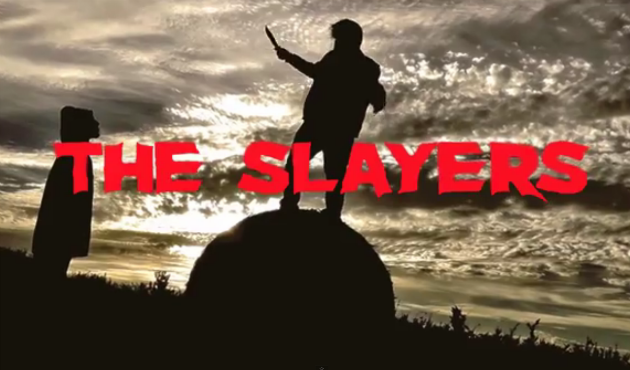 The Slayers does not get off to a promising start with no fewer than eleven on-screen captions (“Reading,” as they say over on Cinema Sins). There are further captions throughout the film and at the end, including a few grammatical/punctuation errors. Most of the first half is Patrick responding to questions from an unseen interviewer while sitting in an armchair. For some reason he is wearing a pig mask (a motif seen also in White Settlers and Piggy – there’s a subgenre right there). Intercut with this are clips of Patrick and/or his family, including footage of Patrick performing, with a godawful rock band, a song with the melodic refrain “Kill the bitch.” Plus some home movie footage of Patrick as a child, and some candid shots of Patrick taking drugs between interview stints. There are also, rather randomly, some vox pops with members of the public saying whether they think the Slayer family are guilty or not. Some of these are costumed attendees at a Comic Con including a guy dressed as Deadpool and a girl in a terrific Tank Girl costume complete with missile-bra!

The problem is, there’s no reason at all to believe Patrick’s version of events. He’s clearly a drug addict, and the captions tell us he has an agent securing him a book deal. Then the second half of the film is Patrick’s footage in which he and his three brothers abduct, torture and humiliate Anna Thompson, who then suffers a drawn-out death as she is dismembered and disemboweled by Stanley Slayer, before the family settle down to a meal of her body parts. 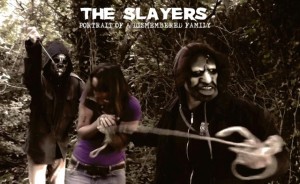 At no point do we get any real characterisation. Patrick, who talks with a weird, distorted voice for no obvious reason (it’s not like he’s trying to hide his identity) is a bland, unpleasant, greedy drug addict. His father is a somewhat more rounded character and to be fair to Poulter the actor does his best with his rather stilted dialogue, trying to convey genuine paternal concern for his mentally disturbed son, but there’s no more depth to Stanley Slayer than Patrick. And of course we never see the two together (except in the fake ‘murder’ footage) so there’s no opportunity for character conflict. Beeching does a good job of screaming and struggling but is called on to do little else. Kudos to her however for coping with a ‘burial alive’ scene which is really the one genuinely horrific and interesting moment in the film.

Julian Poulter, Marek Gruszczynski and Matt Lemon are Patrick’s brothers and there’s a hint of sibling conflict between them in a couple of shots but not enough to be interesting. Georgina Richmond as Olga Slayer does nothing except pull faces like an embarrassing, drunk auntie. And then there’s Alicia Newton as Monica Reed, the unseen interviewer. Whose. Wooden. Readings. Of. Her. Questions. Are. Painful. In. The. Ex. Treme.

It’s clear that Poray has aimed for ambiguity but he has missed it completely with a misfiring script of leaden, prosaic description and (in the second half) gratuitous cut-price nastiness that rapidly becomes boring. With what is presented to us on screen there is absolutely no reason to doubt that Slayer Jr is lying (and consequently that Slayer Sr is telling the truth). There’s no mystery, and without mystery why should we care? 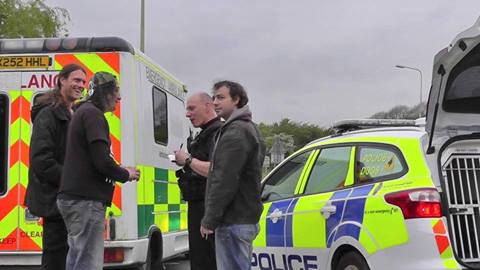 The Slayers is feature length at 72 minutes and was brought in for under three grand. Shot in and around Barnstaple in April 2014, the film premiered in September that year on the Viewster website. Of passing interest is an interaction with police on the last day of the shoot. Some-one spotted Beeching being bundled into the back of the brothers’ vehicle (for no apparent reason, an old ambulance) and called the Old Bill. The cops flagged down the ambulance and apparently had a tactical firearms unit on the way. Cheekily, a brief shot of this incident, shot covertly from inside the director’s car, is included in the actual film. Sadly, this is about as meta as The Slayers gets.