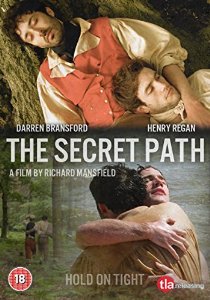 This is an LGBT horror film which is being marketed more on – and hence more towards – the LGBT side of things than the horror. And I think that’s correct because although it’s a ghost story of sorts, there’s not a great deal here in terms of horror content and it’s really one for completists.

In the early 19th century, Londoner Theo (Henry Regan: Perfect State) and Bristolian Frank (Darren Bransford: Psychosis) are two young gay men wandering through woodland and living rough. For most of the first act, that’s pretty much all they do: they walk and they kiss and they kiss and they walk. Slogging and snogging, basically. Plus one fairly raunchy actual sex scene. There’s a considerable amount of walking in the rest of the film too, which is somewhat confusing to be honest because they don’t seem to be actually going anywhere. This was an age when Shanks’ pony was pretty much the only means of getting around for anyone not rich enough to own a horse, so one assumes that Frank and Theo are on their way somewhere. But repeated shots of a massive country house and the distinctive obelisk in the grounds thereof indicate that in fact the pair are basically staying in the same place. There is some talk early on of waiting until all the servants have left, but they never approach the house and its relevance isn’t clear.

When not wandering through the leafy woodland, the boys indulge in a spot of grave-robbing, cleverly filmed by Mansfield using only tight close-ups of worried faces and sweaty torsos plus judicious sound effects. This works very well, and the implication is that when they have raised enough money the two men will head off somewhere and set up home together, although we never have any clue who they’re selling these bodies to, and we never see a cemetery in daylight.

But grave-robbing isn’t the horror angle here. Theo sees figures – in his dreams and increasingly in the woods while awake. There is a young West Indian man in a tricorn hat (a wonderfully spooky performance from Jamaican Miguel Campbell-Lewis, who was in a stage production of The Signalman), kept just out of focus by Mansfield’s camera to emphasise his otherworldliness, and a mysterious man in a top hat (Daniel Mansfield), spotted only at a great distance. Occasionally Theo has glimpses of someone or something which may be the Devil himself.

To be honest, that’s about it as far as the plot goes. As his animated feature Wolfskin showed, Richard Mansfield isn’t a one for simple, coherent narratives. We find out a bit more about the Caribbean lad and his significance to Theo but much of the film is left for the audience to construct their own interpretations, which some people will like and others won’t.

What I would really have liked more of in the film, to be honest, was characterisation. The two main actors do a fine job and there’s a real sense of affection between the characters, I’ll grant that. I don’t know how accurate this is: my knowledge of Georgian homosexuality is limited and most of the records of the era seem to pertain to society scandals rather than working class couples, although the fact that both men were sailors certainly rings true historically. The early 19th century was an age when pillorying and occasionally hanging for the crime of sodomy was not uncommon, but at the same time there were known ‘molly houses’ in London and other cities. In the countryside, a relationship like Theo and Frank’s would probably be much less bothersome – not that they actually meet anyone in this film anyway. 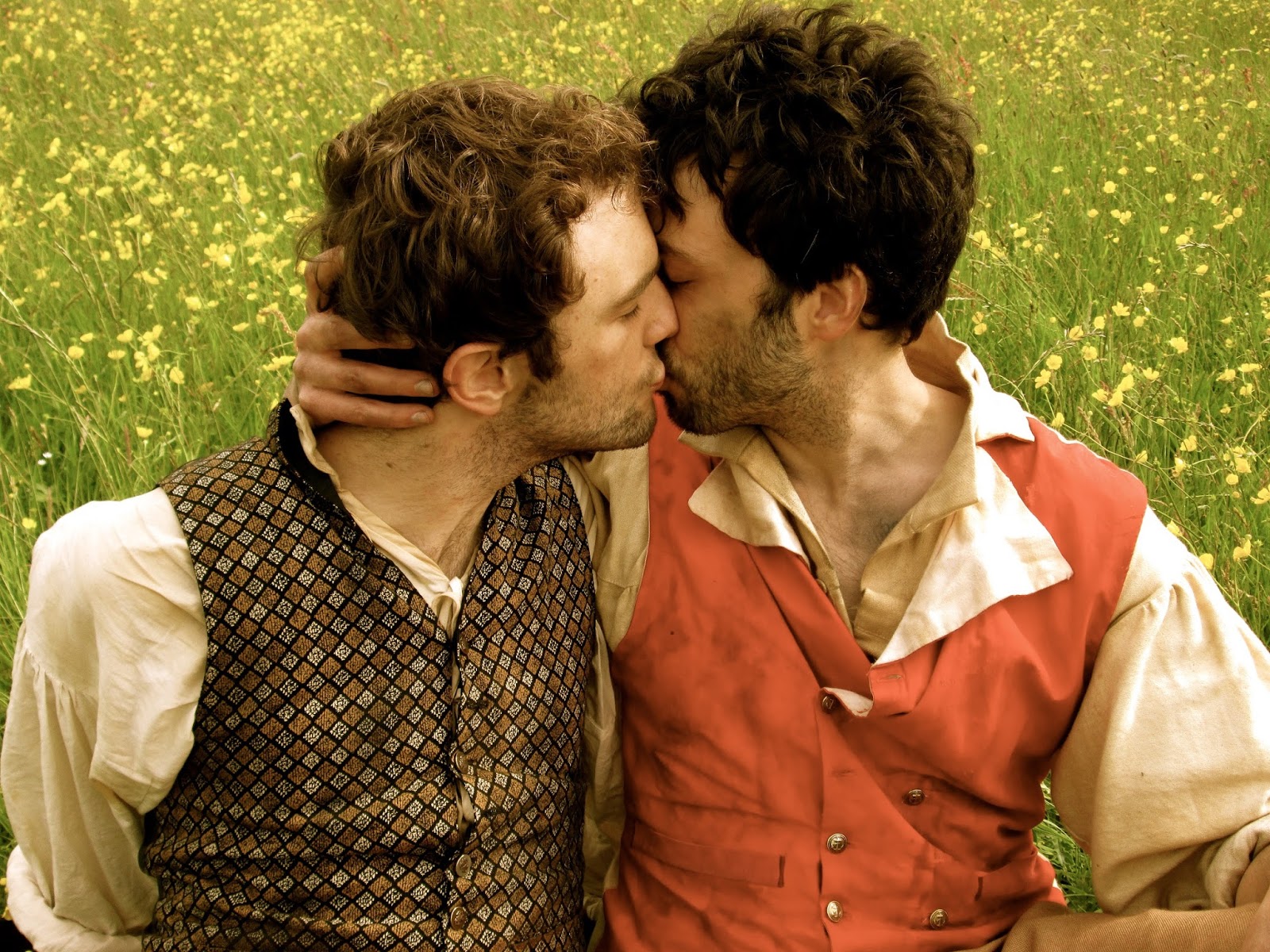 But what’s missing is any discussion or acknowledgement of what their relationship means in any social or religious context, just lots of cuddles and kisses, which is sweet and all – and they’re both good-looking fellas – but doesn’t really explore the implications of a ‘love that dare not speak its name’ in an era when such was potentially a capital crime and inarguably a one-way ticket to Hell. Whether the ghostly/demonic visions relate to the unnatural, sinful nature of their relationship isn’t clear. I found myself wondering whether the film would be significantly different if Frank and Theo were just mates – if this was less romance, more bromance. Without some sort of anguish over whether what they are doing is right – the sodomy as well as the grave-robbing - I’m not sure it would be.

The whole film has clearly been shot on an absolute shoe-string but by staying almost entirely within the woodland Richard Mansfield has managed to maintain the conceit of his 1810 setting (although I think the haircuts are a bit too modern and both men’s outfits are anachronistically clean and in good repair). The handheld camera is rather too shaky for my liking in places, but the outdoor photography is fine and shows off the locations to good effect.

Aside from those noted, the only credit is for said costumes, which were provided by Ed Holland, so we can assume that everything else was done by Messrs Mansfield and Mansfield. (Holland mainly does theatre shows, including the German version of We Will Rock You, and seems to have a penchant for this particular era so I don’t doubt the authenticity of cut and fabric, just the neatness.) 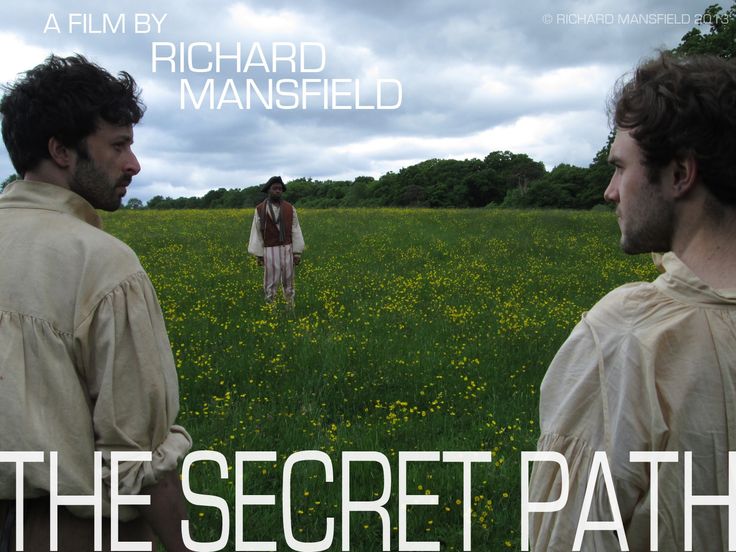 While I can’t say I got a lot of satisfaction from The Secret Path, nevertheless I really admire what Richard Mansfield is doing in ploughing his own idiosyncratic furrow within contemporary British horror cinema. The Secret Path was released in the UK by TLA Releasing (and as VOD via Blinkbox) in October 2014 following a premiere in Texas in June at a gay horror festival called Fears for Queers! It joins a small but fascinating subgenre of gay British horror which also includes Vampire Diary, The Wolves of Kromer and Unhappy Birthday. Still to come from Mansfield Dark are MR James-ian creepfest The Mothman Curse (aka Who is Coming) and a vampire feature called Drink Me.