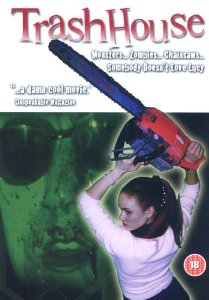 Having reviewed and enjoyed KillerKiller, I felt it worth splashing out a fiver to sample Pat Higgins’ debut feature TrashHouse - see what it’s like.

It’s... okay is what it’s like, it’s good in bits. In fact, it splits fairly neatly down the middle in that the first half of the 85-minute film shows some promise but the second half is an incoherent mess.

Five young people have been selected to take part in an experiment which will involve the implantation of microchips in the back of their necks. This will give each of them the power to create anything and alter reality in any way, in the room which they are assigned in an old house. They have been chosen because detailed files on their lives - and they are understandably shocked to find out that such files exist - indicate that they are all mentally balanced individuals.

Lucy (Amber Moelter: who played Catwoman in two fan films) and David (Tom Wontner: LoveCracked! The Movie) are clean-cut, good kids who rapidly fall for each other. Lucy creates an idealised existence in her room, based on the old 1950s American sitcoms which she watched as a child (there’s a touch of Pleasantville in these sequences). David is happy to play along, in tweed suit and crisply knotted tie, although even he thinks that Lucy goes a little far when she turns the room - and them - black and white and then gives herself a laughter track. 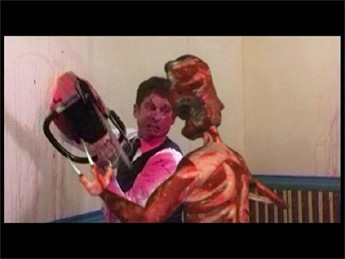 Jack-the-lad Luke (Oli Wilkinson: Ricky in HellBride) is taking the opportunity to summon up and shag every centrefold he has ever ogled. Studious Charlotte (Hannah Speller, who was in a couple of episodes of EastEnders, helping to run the cafe) creates a super computer and uses it to learn everything she can, up to and including devising cures for AIDS and cancer; this doesn’t really make sense because there’s no suggestion that the chip affects the brainpower of the experimental subjects. And then there’s surly James (Richard Collins: Perry in KillerKiller) whose creations seem to mostly involve guns and knives.

Ensconced in an old house for a long weekend, with metal shutters over the doors and windows, the chips only work in each person’s own room and for about 15 hours each day. At ten o’clock everything vanishes like Cinderella’s ballgown and the quintet can mingle in the communal areas of the house.

It’s an interesting, if slightly limited, set-up. There’s no explanation of why this experiment is happening. When Allen (the always watchable Cy Henty, also in KillerKiller and HellBride), the mysterious figure who has brought them together, is asked whether the experiment is run by the Government or a corporation he laughs and expresses surprise that anyone would consider there to be a difference (a nice, sly moment of satire). Nor is there really any explanation of what the purpose of the experiment is. Allen already has a chip (which he demonstrates to them in the communal room) so the technology is known to work. 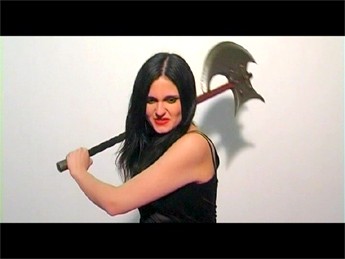 The DVD sleeve blurb (which has a glaring punctuation error) describes the building as “a CCTV monitored house” which, if it were true, would put this film in the same subgenre as My Little Eye, Hell Asylum etc. But there is no CCTV in the house, the only monitoring being read-outs of heart rate etc which are watched by two bored techies (Gary Delaney and Nic Ford) whose off-topic discussions provide an amusing counterpoint to what is happening in the house.

So the first half of the movie is basically a science fiction set-up questioning the nature of reality, positioned somewhere on a line between The Matrix and Eternal Sunshine of the Spotless Mind. And although the film’s tiny budget is evident in the spartan set-dressing and the cheapo CGI window shutters, there are some interesting ideas raised.

Of course, there has to be a problem and it’s James who is not who he claims to be. We’re not told who he actually is or why he has assumed a dead person’s identity and the film glosses over the plothole that the bulging folders of personal information seen at the start omitted the crucial fact that the person in question died several years earlier. The point is that ‘James’ is definitely not ‘balanced’. When Charlotte discovers this on her supercomputer, he kills her (which does not cause the computer to wink out of existence and does not seem to be noticed by the two techies), but not before she has also discovered a way to gain access to the cellar from where the chips are controlled (in some way). 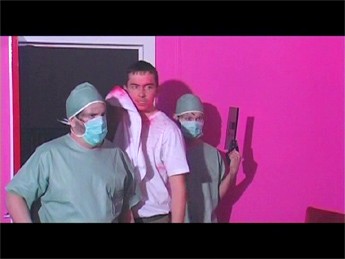 Swiftly dispatching likeable lothario Luke too, James becomes able to create anything anywhere in the house. For some reason he doesn’t kill David or Lucy but instead sets a small army of monsters, zombies and ghouls against them, having scattered various guns, axes, knives and chainsaws around the house for them to protect themselves with. Helping them is Della (Sam Burke aka Samantha Beart, who played Arthur Dent’s daughter Random in the radio version of Mostly Harmless), a recreation of a girl on whom James had an unrequited crush. In a nice twist, since she has been created from his memories of her, she still has the same (negative) feelings towards her. On the other hand, there’s no reason why he couldn’t just change her so that she fancies the socks off him - as Luke does with the centrefolds - and why does she call him James if that’s not his real name?

Anyway, he forgets that he has created her - hence she can help David and Lucy but must keep out of James’ way because if he spots her he will remember to make her stop existing. That’s an example of the clever and interesting ideas that sporadically emerge from the script but are sadly never explored in any depth. 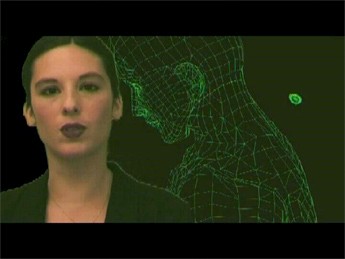 This second half of the film descends into a gory and violent but frankly dull series of scenes of David, Lucy and Della hacking up pasty-faced zombies and dodgy CGI monsters that are impressive for a film of this budget but which nevertheless would be more at home in a ten-year-old video game. There’s no real tension or excitement and the confines of the house prevent Higgins from directing the scenes with the proper coverage needed for us to see what’s happening beyond ‘oh look, it’s another zombie.’

The curious thing is that it is this second half on which the film sells itself: gorehound viewers will fall asleep during the first 45 minutes or possibly fast-forward through it. Yet once the blood starts splattering the film becomes far less interesting and the limitations of the budget become vastly more obvious. The Charlie Kaufman-lite science-fictional set-up may be more packed with holes than a lump of Swiss cheese but it was at least original and intriguing and, for this viewer at least, all interest in the story dissipated when the violence began.

It doesn’t help that Lucy and David are rather bland characters, as evinced by their twee 1950s-inspired virtual reality, and that James is simply not interesting as a villain. After killing Charlotte and Luke, he takes a back seat to let his VR creations do the work and he has no actual motive that I could discern. Only Della really works as a character in the second half; a sentient being aware that her PK Dick-ian existence is dependent on someone else’s thought processes. Frankly, of the original quintet Charlotte and Luke were the most interesting and sympathetic and the two whom I wanted to spend more time with, but by 50 minutes in, they’re toast. 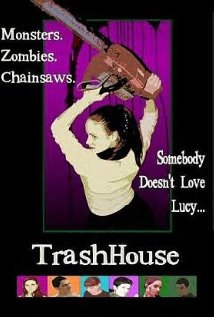 TrashHouse has some nice ideas - if anything, it has too many - but it does not have the budget to explore them and devoting the second 45 minutes of the film to uninvolving gore leaves raised questions unanswered. It’s a commendable debut feature but it just doesn’t work, sadly. Which is why it’s a good thing that Pat Higgins threw himself straight into shooting HellBride and KillerKiller back to back. In KillerKiller, he successfully melded the violence and the ‘thinky bits‘ by not only mixing them up throughout the film but also making the one dependent on, and inextricably linked to, the other.

The cinematography, lighting and editing of TrashHouse are all good and Higgins directs individual scenes well but the story is simply far too confusing and chaotic to be satisfying.