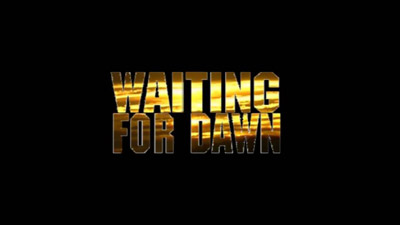 Waiting for Dawn is a valiant attempt to do something different. I’m not certain to what extent the film succeeds in that attempt but it makes a decent stab at it and should be applauded for what it achieves.

Rob Leetham (who was also in dodgy fanfilm The Hellraiser Chronicles: A Question of Faith but we won’t hold that against him) stars as Carl Teagarden, an ordinary sort of bloke who proposes to his girlfriend Vicki (Iona Thonger) one morning and later finds himself wondering if he has made the right choice. Carl and Vicki have just moved into a new home, returning to the town where they grew up, and they notice that a drinking establishment called The Waiting Room is still operating - and still closed. 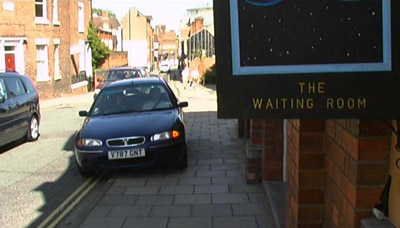 The Waiting Room, it seems, is a bit of a local urban legend, always closed but not apparently derelict or deserted. But when Carl has to wait for Vicki, just for 20 or 30 minutes, on the corner near the pub, he decides to pop inside for a pint and a shufti. Because for the first time ever the place appears to be open - with two bouncers on the door. Inside he finds an empty bar with a misanthropic barman (Thomas Morton, who also handled the music score and sound design), two youths playing pool and a curious fellow who introduces himself as Darwin Barrett (Chris McAleer).

(A note on character names: Darwin is not a good one because it sounds too much like ‘Darling’ when spoken, even with good sound recording, raising unintentional humorous memories of Blackadder Goes Forth. The name Darwin should be restricted to talking dolphins and direct descendants of the father of evolutionary biology.)

The long and the short of it is that The Waiting Room turns out to be a place where the rules of time and space do not apply. This is first made explicit a full 25 minutes in when Carl nips into the gents and re-emerges a minute or so later to find that the place is now somehow packed with people, all of whom look like they’ve been there for some time.

He explores the pub’s back room where there is some sort of rave going on and eventually finds a way out but emerges in another town and having travelled back in time - something made evident when he goes to visit his parents. All the whole he is trying to contact Vicki and when he eventually receives a voicemail from her he returns to The Waiting Room. 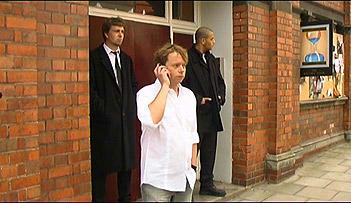 It’s nice to see a British time travel film - we don’t do enough of them - and in terms of genre this sits alongside something like Groundhog Day, never actually explaining its time travel elements. The downside is that, while we certainly don’t want a pat explanation, it doesn’t feel like the movie’s premise is properly explored either. The non-resolution ending doesn’t really make much sense and really a film like this has to do one of two things: either fully explore its central premise or provide some sort of resolution which allows us to finally understand what has been going on and why. Waiting for Dawn doesn’t really do either, alas.

The various people that Carl meets in the pub are all apparently aware of what is going on and some even realise that Carl is new but no-one makes any attempt to explain things to him. People make obtuse comments - some of which the viewer understands because, having read the synopsis, we’re more clued in than Carl - but nobody actually discusses the situation in any meaningful way so neither Carl nor the audience really learns anything. What should be a journey through the human psyche becomes instead a picaresque trail past a succession of unsympathetic (and, truth be told, mostly very boring) minor characters.

Described as a ‘metaphysical love story’, Waiting for Dawn never justifies why Vicki and Carl have been parted. There’s some implication that it’s to do with Carl’s second thoughts (externalised during the first act in a too-long scene with a mate of his in a different pub) and before the film is over he has announced his absolute, certain, undying love for Vicki. All very sweet but we’re left with no indication that Carl has actually learned anything or that his realisation of his certainty will help him or Vicki in any way. In a story like this one expects some sort of moral justice but it seems that the various tossers and tits encountered by Carl are all happy to stay in The Waiting Room while our hero must suffer, possibly into eternity, for nothing more than an entirely understandable moment of doubt. 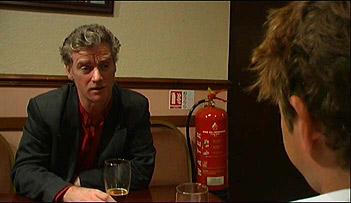 Technically, Waiting for Dawn is highly commendable. The acting is all good, especially from Leetham, and the dialogue is fine except that it doesn’t really tell us anything. We constantly expect to learn something and, well, never do. Lighting, sound and editing are all top-notch and it is especially fine to see a slice of fantastique indie cinema which eschews special effects completely (unless one counts the smoke and light in the rave scene).

This is the first feature from Mr Glass Productions, a Shrewsbury-based film-making group who have previously concentrated on shorts, including The Man of Great Stature, It Ain’t Rocket Science, Chain and a series for the Beeb called The Cold Light of Day (not to be confused with the Dennis Nilsen biopic). James T Williams pulls multiple duties as writer, director, editor and co-producer, as well as acting. Also in the cast are Joseph Ripley (who was one of the infected in 28 Weeks Later), Campbell Foster (who was also in a version of The Tell-Tale Heart and a British horror feature I had not previously encountered but want to find out more about, Newgate) and Neil Higham as Carl’s dad.

In an era when there are so many comparatively easy, lazy ways to make your debut feature, Waiting for Dawn is a valiant - and to some extent successful - attempt to do something different, challenging and original. That it doesn’t quite come off is, I think, possibly due to over-ambition. There are some interesting ideas here but they don’t really go anywhere and if we, the audience, are to be taken on a journey, we expect some sort of destination. Carl is a well-developed character and a terrific performance from Leetham; Thonger also does a great job with her comparatively limited screen time. But most of the other characters seem like cyphers - and not terribly sympathetic cyphers either. A ‘pub of the damned’ is a great concept but the lost souls inside it need to be fascinating characters; we should either want to spend time with them or dislike then but be unable to tear ourselves away. 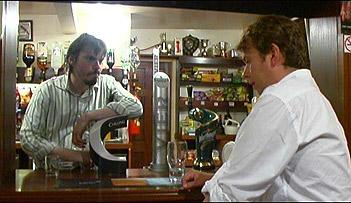 Near-as-dammit feature-length at 68 minutes, this could easily be stretched to 70 by doing a Charles Band on the end credits and slowing them down a bit, or maybe a slight re-edit would add in another 120 seconds or so. Or maybe Mr Glass Productions should build on the experience of Waiting for Dawn and crack on with developing their next feature. I would certainly like to see more from this lot.