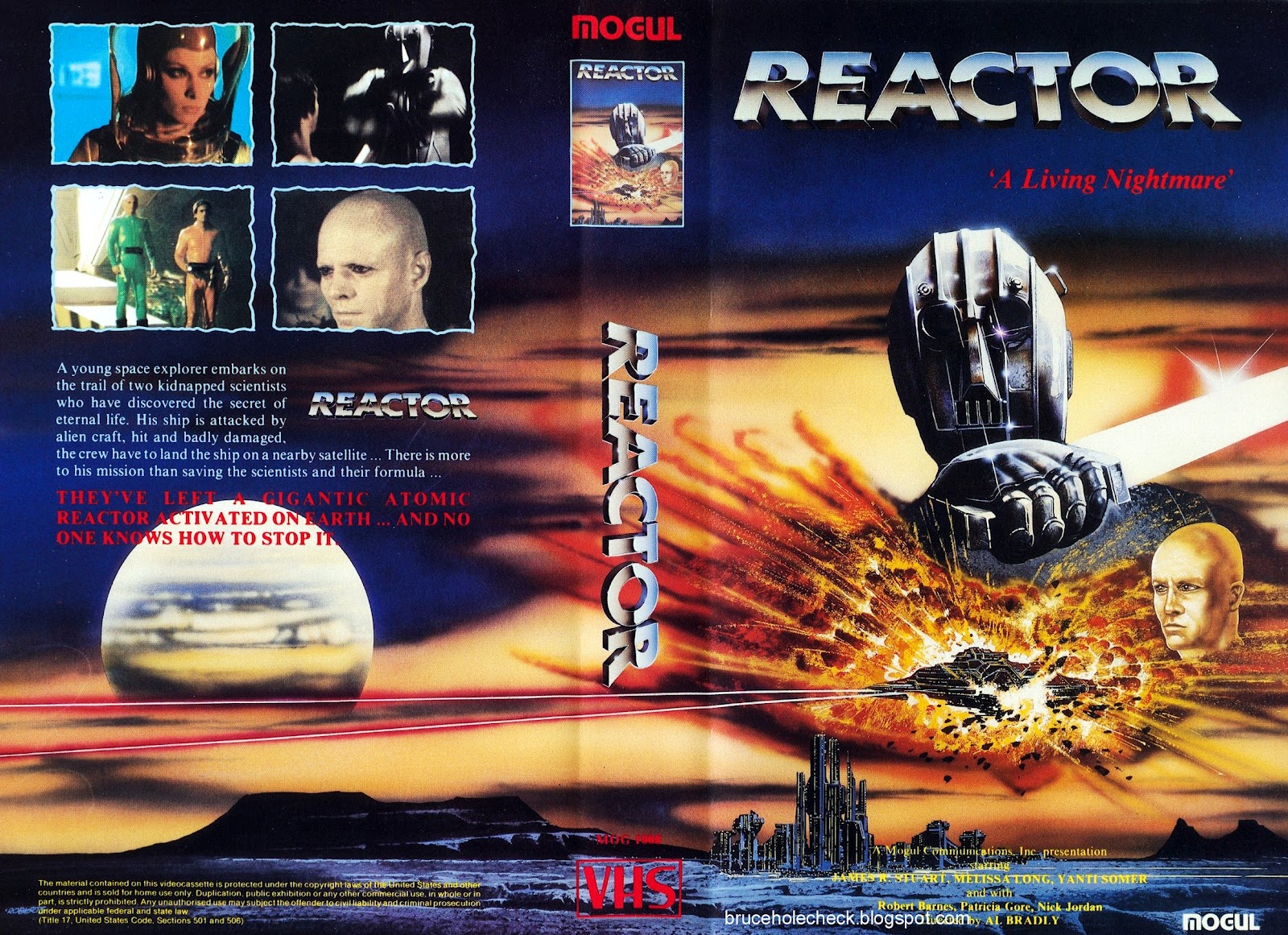 Reactor is unrepentant rubbish from start to finish. Even by the standards of Italian late 1970s sci-fi movies - which are not high - this is bobbins. The normally reliable Delirium magazine recommended this as so-bad-it’s-good but let me assure you, it ain’t. I laughed a few times at the sheer ineptitude, but mostly I was shouting at my TV, “For God’s sake, please make it stop!”

Some idea of how cut-price this piece of dreck is can be gleaned from the following fact: the spaceship is called the Trissi, so all the crew have the word ‘Trissi’ on their spacesuits - this is actually because the ‘spacesuits’ are ski-suits loaned by a company called Trissi Sportswear. If the producers had spent a bit more, the action could have taken place on the starship Adidas!

Professor Carr and his glamorous lab assistant Lois (‘Melissa Long’, ie. Malisa Longo: Salon Kitty, Nightmare Concert, Thor the Conqueror), who are constantly referred to as a sort of gestalt entity - ProfessorCarrandhisassistantLois - even by their closest friends, are kidnapped by aliens. “A gang of aliens has kidnapped ProfessorCarrandhisassistantLois,” says a co-worker, “I actually saw it happen.” It’s amazing how a film so laden with clunky exposition can nevertheless make not the slightest bit of sense. 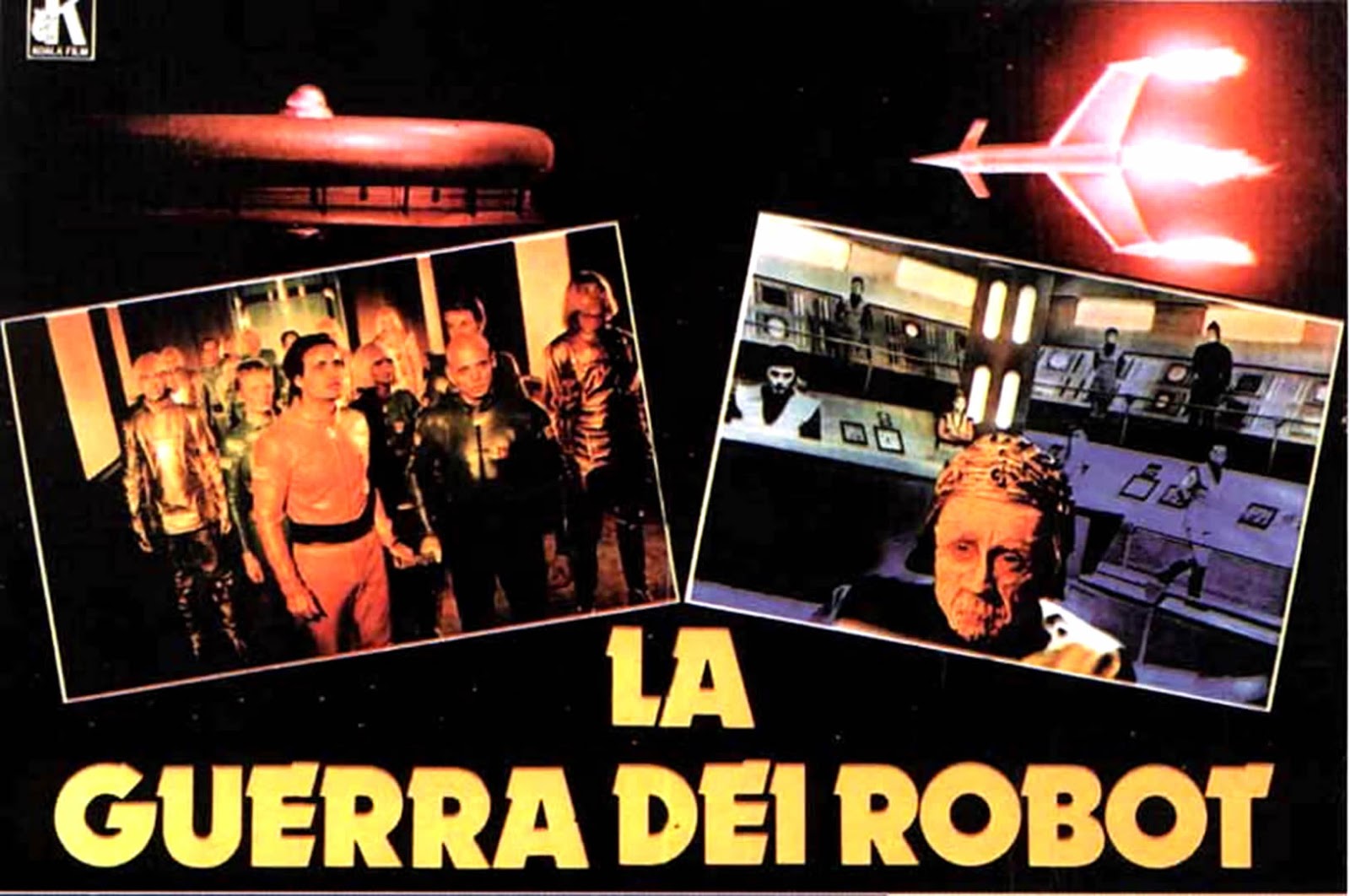 The aliens all wear silver costumes and have bad gold wigs, and head off in a flying saucer. Unfortunately, the Prof’s latest experiment - something to do with creating life - involves a nuclear reactor (hence the English title) and no-one except the Prof knows how to switch it off! Unless he can be rescued, the reactor will explode, destroying the entire city in eight days, fourteen hours and three minutes (they’re very precise about this).

The spaceship Trissi sets off, commanded by Captain John Boyd (Antonio Sabato: Bronx Warriors 2) who is enamoured of ‘HisassistantLois’ and oblivious to the torch carried for him by one of his crew, Julia (Yanti Somer: Battle of the Stars). Repairing a defence satellite knocked out by the aliens, Boyd determines the location of their home planet, which is: “North Pole Earth, ninety degrees west and eight-ten North.” Whether the dialogue was as inept in the original Italian is not something I can comment on. At least, not politely.

Also on board is a chap with a blond bubble perm whose character name is never mentioned but who seems to be second in command. He is supposedly from Texas which is quite a shock as the dubbing actor has the most extraordinary accent. It’s as if a Texan accent has been written phonetically and then read out loud by someone who has never even heard of Texas. 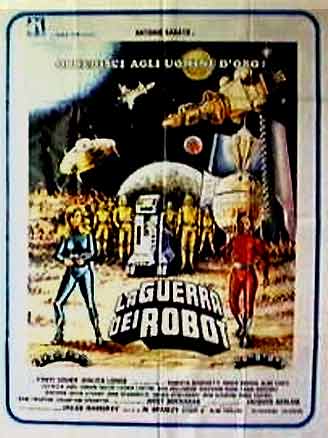 The Trissi lands on the planet Azar where the exploratory party are attacked by some barbarian-types with gold skin and leather hoods over their heads. The hoods cover bizarre bulbous eyes, but fortunately the only barbarian with dialogue, the leader named Kuza, has a normal face and is simply a bald, gold bloke. “As you see,” he tells Boyd, “we are a race of humanoids but we are different from you.”

The humans escape and fight off a bunch of the original, gold-wigged aliens who are apparently from the planet Anthor. They have discovered the secret of eternal life but can only survive by transplanting organs from a lesser race, the inhabitants of Azar. It’s very clear that, although this film was made to cash in on Star Wars fever, the biggest influence in terms of both story and design is the TV series UFO, which was very popular in Italy.

With Kuza’s help, the Trissi heads to Anthor where they swiftly find ProfessorCarr operating a giant computer, but he summons Anthor guards who capture our heroes and parade them before the Empress, who turns out to be, unsurprisingly, HisassistantLois. There then follows lots of running down corridors and double-crossing until eventually everyone is back on board the Trissi, including ProfessorCarrandhisassistantLois, and heading for Earth. The Prof is under sedation, wakes up, kills the ship’s doctor and tries to escape, but is shot by an unseen assailant. It’s Lois, who is a bad’un after all and has somehow smuggled a whole squad of Anthorian goons on board.

Control of the ship is wrested back to Boyd and his crew but Lois escapes out the airlock to one of the pursuing fleet of Anthorian ships, commanded by a minor character called (I am not making this up) General Gonad. The last quarter of an hour or so is one of cinema’s dullest spaceship battles which culminates in Boyd having to make a choice between Lois and Julia. (Oh, the reactor - remember that? - is deactivated successfully despite the death of Prof. Carr because Kuva picked up a datachip while on Anthor which turns out to be the Prof’s notes...) 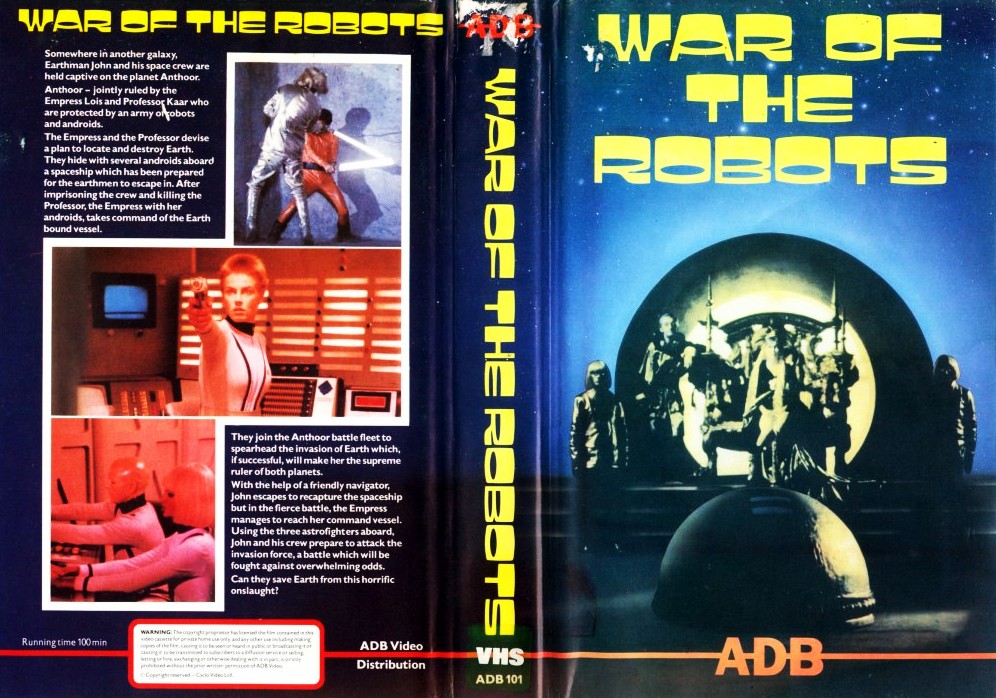 Christ, this is cut-price movie-making. And yet, the situation was such in the late 1970s, with Star Wars fever riding high and the video market exploding, that any old shit with a spaceship in it could turn a profit. Alfonso Brescia (Iron Warrior, Amazons Against Supermen) must have been making money at this sort of thing - he made five of them! Starting with Anno Zero, Guerra nello Spazio aka War in Space in 1977, then this fella (La Guerra dei Robot - oh yes, I almost forgot, the Anthorians turn out to be robots!) and Battaglie negli Spazi Stellari aka Battle of the Stars aka War of the Planets in 1978, and finishing with La Bestia nello Spazio and Sette Uomini d’Oro nello Spazio aka Captive Planet in 1979. The films weren’t sequels but some of the same cast and crew were used, along with sets, costumes, props and not-very-special effects. I have seen Battle of the Stars and, though it is rubbish, it is nowhere near as bad as Reactor. Of course the best known Italian SF film from this period is Luigi Cozzi’s Starcrash; let me assure you that, if you thought that was a bit pants, it is The Magnificent Ambersons compared to Brescia’s work.

Words cannot describe how cheaply and quickly this has been thrown together, bearing in mind that this is a professionally made motion picture, not some amateur production. Some stuff is sheer costcutting: all the characters, whether human or Anthorian, use exactly the same small, plastic, toy ray-guns; and spacewalk sequences always show the character on the far right of the screen, their feet just off screen - in other words, they eschewed wires in favour of simply turning the camera on its side. Other defects fall more under the heading of sheer carelessness: much of the film is out of focus, and during the final fight for control of the Trissi, someone forgot to add any sound effects!

Reactor is available on a Region 1 double-bill with War of the Planets under its US title, War of the Robots, a package which rather cheekily pinches an iconic illustration of Caroline Munro in her skimpy Starcrash costume. Rest assured that Hisassistantlois doesn't wear anything quite so sexy... 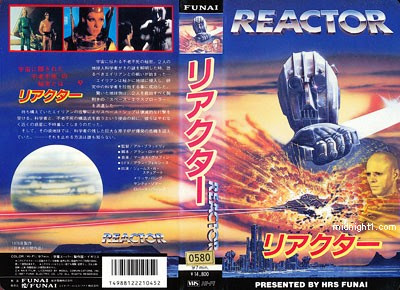 My full-screen British video (probably from the 1980s) has English language titles so most of the Italian names have been cunningly converted into English. Brescia is usually credited as ‘Al Bradley’ but here is ‘Al Bradly’ on screen and on the packaging. The cast includes ‘special appearances by’ Jacques Herlein (whose amazing CV includes The Whip and the Body, Goliath and the Sins of Babylon, Tower of Screaming Virgins, Shaft in Africa, Frankenstein’s Aunt, The Messenger: The Story of Joan of Arc, The Ironmaster and The Winds of War!) and ‘Mickey Pilgrim’ (presumably this is Ines Pellegrini from Salo or 120 Days of Sodom). The ‘special effects’ are by ‘Allan Forsyth’ who is actually Aldo Frollini. His earliest credit (that I can find) is a 1968 spaghetti western, he has worked with everyone from Argento to Fellini, and he now runs his own effects company in Rome, providing live video effects for plays and operas as well as some movie work.