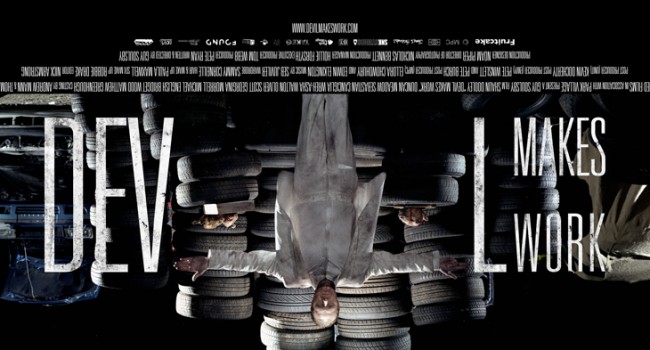 If you have ever sent me a screener and then waited for ever while I got round to reviewing it… well, that’s my life. Guy Soulsby sent me a copy of his short film Devil Makes Work, which is precisely seven minutes and ten seconds long. And it still took me more than two weeks to get a review written.

Partly it’s finding the time. I work all day, spend a lot of time looking after TF Simpson, have other writing commitments (not least my monthly Devil’s Porridge blog for Hemlock Books) and always have a backlog of screeners waiting to be viewed. More than the overall pressures of work, it is literally ‘finding the time’, which sometimes means the middle of the night when The Wife and The Boy have both gone to bed but I’m too tired to think straight.

Case in point: two weeks after receiving the screener, I sat down in my office to watch Guy’s film. Just seven minutes and ten seconds. And less than two minutes in there was a voice at the door. “Da-a-ad!”

God damn. I love you. I love you more than life itself, but leave me a-freaking-lone once in a while. Just for seven minutes and ten goddamn seconds, can’t you?

And so, quite late at night, I tried again. And the next morning, sat down to write the review.

Devil Makes Work is an astounding short film. A lot of time, effort and money has gone into making it look like even more time, effort and money has gone into this. In an age when feature-length films often have credit rolls so minimalist that you could hold the cast and crew screening in the front room of a terraced house, about a hundred people contributed to this production. The effects, the make-up, the design, the sound, the whole shebang. It’s a tremendous showcase for everyone’s work.

But it is essentially a showcase, which makes it hard for me to review, because what the hell can I say about it? Basically it’s Shaun Dooley playing Old Nick as a sort of Satanic geezer gangster, sat on a throne of old tyres, pontificating on the nature of good and evil while we see a succession of figures: Sisyphus pushing his rock uphill, Jesus carrying his cross, a demon, a witch, a voodoo priestess, a rioter, a pimp and a prostitute. Shorn of the opening titles and closing credits, the whole thing lasts less than five minutes.

Visually, it’s hugely impressive. There’s no denying that. There’s a bunch of stuff on the website showing designs and inspiration and props and behind-the-scenes stuff and VFX and grading and whathaveyou and whatnot. The punishing four-day schedule of the actual shoot included one ‘day’ that last for 35 hours. Seriously, you cannot fault the hard work and dedication (and skill and talent) that has gone into this little picture, from Soulsby and everyone else. And all that hard work and dedication (and skill and talent) is evident on screen. 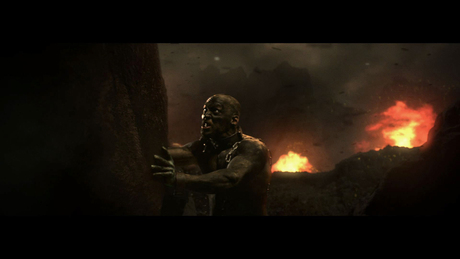 Devil Makes Work has screened at several high-profile festivals and will no doubt show at more. If you’re at a festival and it’s showing, take the trouble to see it. It looked great on my laptop so I expect it will look awesome on the big screen. Or, if you’re reading this review in the future, after the film has gone online, have a quick google and be impressed.

Soulsby is an experienced director of commercials and has worked for many leading international brands. Devil Makes Work is sort of a commercial for himself. But the thing is this. He says he set out to make Devil Makes Work look like a feature film, and … here’s where I pull my honesty trousers on … I’m not sure that it does. What it looks like is a music video. Only without a song.

It’s a great showcase for the director and, frankly, if I was looking for someone to direct a big budget music video, I’d be knocking on his door. We can see that Soulsby has a very strong visual sense, that he has a masterful camera eye, that he has a strong worth ethic and that he has the organisational skills to lead a team of a hundred people and craft something amazing. But can’t we see that from some of the big-name commercials on his own website?

A feature film is more than a succession of stylish images. At least, a good one is. There is certainly a trend in Hollywood to make awful, empty movies that are rammed to the gills with vast amounts of special effects: all style and no substance, all sizzle and no sausage. Films that jump from one set piece explosion or alien spaceship or car chase to the next without any concern for making sense or appealing to anything but the most visceral emotions. Films that are like watching somebody else play Grand Theft Auto or Call of Duty. Films which cost obscene amounts of money and, let’s face it, sometimes make obscene amounts of money back. Maybe that’s the gig that Guy Soulsby is pitching for here. 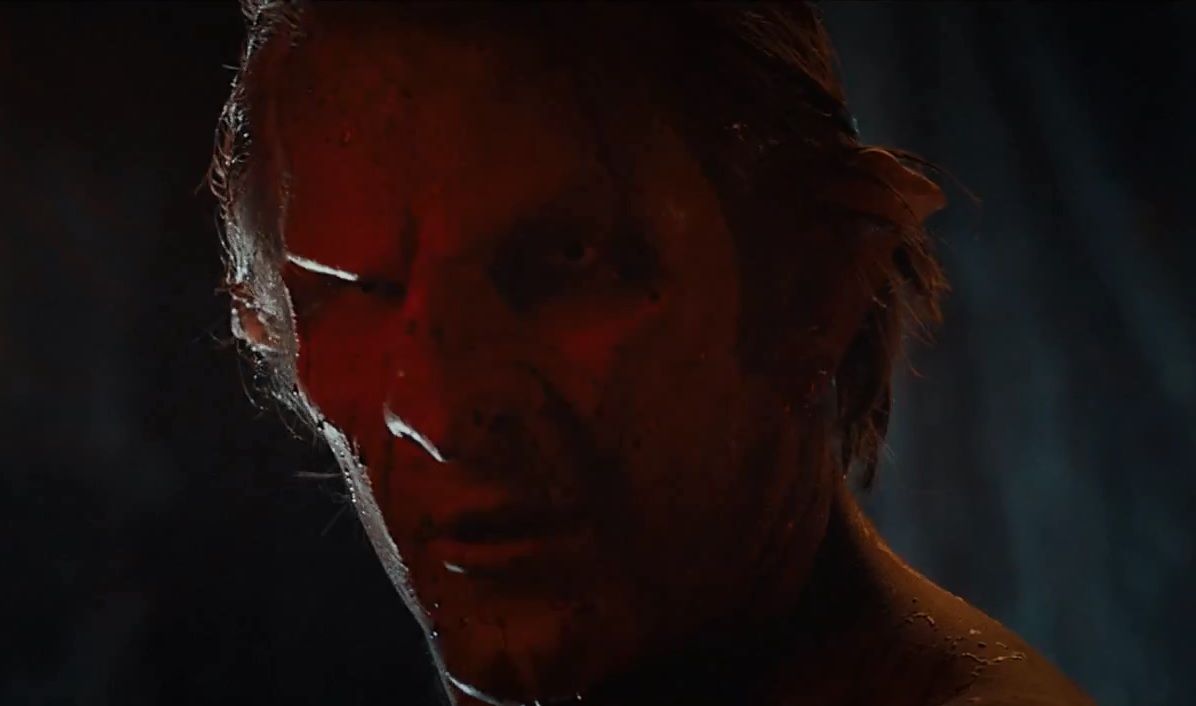 But films – good films – are about stories. And characters. And relationships. Devil Makes Work is a beautifully shot and edited sequence of vignettes but it’s not a narrative piece. And neither is a 60-second commercial for Nike or whoever.

My advice – not that anyone ever listens to me, and God help your career if you do – would be for Guy Soulsby to now make a second film which bears no relation or comparison whatsoever to Devil Makes Work. A simple film: one or two locations, handful of characters, no fancy-dancy effects, no bombastic, cod-Biblical motifs or themes. Just a simple story, told through the interaction of believable, sympathetic characters. A film that shows Soulsby can tell a narrative, that he can define a character, that he understands the importance of character relationships.

We need to see a man climb a tree, the same man fall out of the tree, and then, well, it’s up to Soulsby whether the guy is alive (comedy) or dead (drama). That’s the three-act structure, and it’s what defines a story. It’s something we can’t get from seven minutes and ten seconds of what is effectively just a tree on fire.

Watching Devil Makes Work, I was reminded of a story I heard many years ago about a wannabe comics artist who sent a portfolio of drawings to Marvel or 2000AD or whoever and was offered some work. When the lad asked why, out of all the submissions the publisher must receive, his had stood out and been chosen, this is what he was told. Ninety-nine per cent of the artwork submitted was muscular superheroes clad in spandex flying and fighting. But this particular artist had submitted drawings of real people in real poses, showing that he understood the basics of comic artwork; that it’s about people, not superhero caricatures. 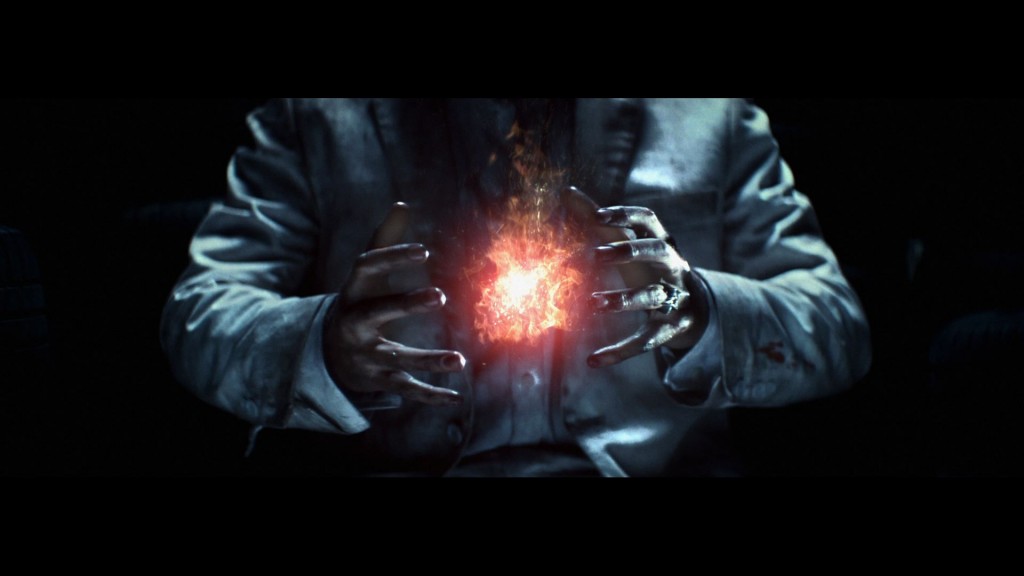 In crafting Devil Makes Work, Guy Soulsby has shown that he can draw superheroes. But can he draw real people? If he can make a simple narrative film that is as impressive in its own way as this one, but for entirely different reasons, then potentially Hollywood is his.

Of course, he didn’t do this alone, as noted above. The film was produced by Pete Ryan who started out as a video operator and projectionist before moving into production as a lowly runner nine years ago – and now has his own production facility where high-end stuff like this can be shot. The cinematographer was Nicholas Bennett, the editor Nick Armstrong, both highly experienced in commercials. Production designer Noam Piper has designed a couple of drama features I haven’t heard of and was stand-by art director on Paddington. Robbie Drake (Evil Calls, Zombie Resurrection etc) designed the demon make-up. Other make-up was provided by Rebecca Hall (The Eschatrilogy, The Sleeping Room, Ibiza Undead, Soldiers of the Damned) and Paula Maxwell. Seb Juviler composed the music.

Shaun Dooley, who makes an effective and charismatic Satan, isn’t a name that springs to mind in terms of British horror but a perusal of the IMDB shows he has actually amassed a considerable number of genre credits including Eden Lake, Salvage, The Awakening, The Woman in Black and as yet unreleased werewolf western Blood Moon – plus extensive TV work in things like Wolfblood, Red Riding, Broadchurch, Misfits etc. Of the other actors, only Duncan Meadows (Sisyphus) has more than the odd credit. His muscles have had bit parts in Dark Shadows, Merlin and Skyfall, and he’s in upcoming British horror K-Shop. 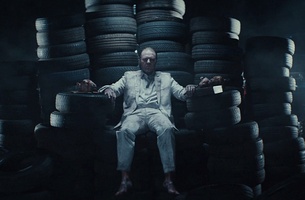 It’s really, really difficult reviewing something like Devil Makes Work, because it doesn’t have any of the things I look for in a movie, If this was actually a feature film I would trash it for having no characters and no plot. If it was even a narrative short film, I would level the same accusations. But it’s not intended to have characters or plot, it’s intended to be an impressive succession of images that conveys or promotes a feeling. As such it has more in common with a music video or a commercial.

Technically and artistically this is awesome. It does what it sets out to do, with what it has available, to an extraordinarily successful degree. But is it a film? Make us a film now, Mr Soulsby. Make us a movie.