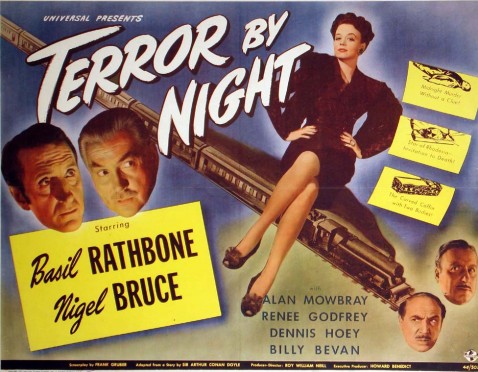 Terror by Night was the penultimate of the fourteen Rathbone/Bruce Sherlock Holmes movies. By this time, the actors had been playing the roles for seven years and were firmly established as the premiere Holmes and Watson, but the quality of the movies had declined, as is always the case. This one runs a scant sixty minutes, makes no pretence to any connection with any Conan Doyle story and frankly is a disappointment, especially in its resolution, although it has some fun performances from a supporting cast of Universal Studios character actors.

Instantly recognisable among these are moustachioed Billy Bevan (a former silent comedian for Mack Sennett whose other credits include two Bulldog Drummond pictures, Dracula's Daughter, two Invisible Man films, the 1933 A Study in Scarlet, the 1941 Dr Jekyll and Mr Hyde, The Man Who Wouldn't Die, The Return of the Vampire and The Picture of Dorian Gray) and weasel-faced Skelton Knaggs (The Invisible Man's Revenge, Dick Tracy Meets Gruesome, Dick Tracey vs Cueball, Isle of the Dead, Bedlam and of course House of Dracula). 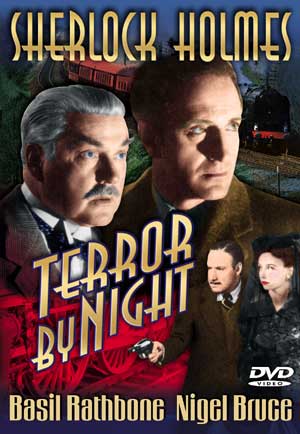 All the action, bar a prologue, takes place on a train travelling from London to Edinburgh. Lady Margaret Carstairs (Mary Forbes, who was a different aristocrat in The Adventures of Sherlock Holmes seven years earlier and also had a bit part in Sherlock Holmes in Washington) is onboard with her drippy son Roland (Geoffrey Steele) and a fabulous diamond brooch. She is convinced that an attempt will be made to steal the diamond en route so she has employed Holmes to accompany her. Inspector Lestrade is also aboard, ostensibly on a fishing trip but really to keep an eye on what goes on. Series regular Dennis Hoey (The Mystery of the Marie Celeste, Tod Slaughter's Maria Marten, Tarzan and the Leopard Woman, Frankenstein Meets the Wolf Man, She-Wolf of London) turns in a terrific performance of dogged incomprehension which lifts the movie a notch or two

When the diamond does in fact disappear - Roland Carstairs being murdered in the process - Holmes orders their carriage to be sealed and begins grilling his fellow passengers. These include the furtive Mr and Mrs Shallcross (Gerald Hamer, also in Sherlock Holmes in Washington, Pursuit to Algiers and The Scarlet Claw, plus Bulldog Drummond's Bride; and Janet Murdoch), glowering mathematics professor William Kilbane (Frederic Worlock, also in Sherlock Holmes Faces Death, Dressed to Kill, Pursuit to Algiers and The Woman in Green, plus She-Wolf of London and the 1941 Jekyll and Hyde), faux-glamorous Vivian Vedder (former Miss New York and Coca Cola advertising girl Renee Godfrey) who is accompanying her mother (in a coffin in the guard's van) and who sometimes slips from her cut-glass accent into inadvertent Cockney) and an old friend of Watson's from his time in India, Major Duncan-Bleek.

Alan Mowbray, who plays Duncan-Bleek as a charming buffer not unlike Bruce's Watson, had already acted opposite two other Holmeses: he was in the 1932 film version of William Gillette's famous Sherlock Holmes stage play, starring Clive Brook, and the following year played Inspector Lestrade opposite Reginald Owen in A Study in Scarlet. British-born, he doesn't appear to have made any pictures in this country but started working almost immediately that he arrived in Hollywood in 1931, his credits including Charlie Chan in London, The Night Life of the Gods, the first two Topper films, Abbott and Costello Meet the Killer, The Man Who Knew Too Much (as Val Parnell!) and The King and I. Mowbray is best remembered today as one of the founders of the Screen Actors' Guild. 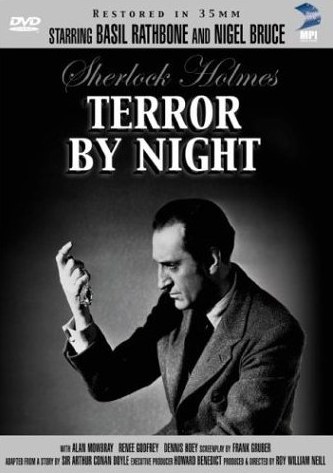 The problem with Terror by Night (a half-accurate title, in that the action does at least take place at night) is that instead of a Sherlock Holmes story we have a straightforward whodunnit with a single, isolated location and a bunch of suspicious characters. And although Holmes does eventually unmask the murderer/thief it's all done in a rather haphazard way which is at odds with the startlingly logical deductions that mark out the character in the original stories (and the more faithful spin-offs). Holmes is convinced that the crime is the work of Colonel Sebastian Moran, an associate of the recently deceased Professor Moriarty, for no more reason, it seems, than that this is a fiendish crime and could only have been committed by a top criminal.

In a completely unsatisfactory bit of plotting, Holmes accuses one of his fellow passengers of being Moran without any apparent evidence, to a polite denial, and though the film's finale is the villain's attempted escape, proving the great detective correct, there is absolutely no indication of how he arrived at this conclusion. The only bit of deduction in the whole movie is when Holmes examines the coffin in which Vivian Vedder's mother reposes and spots that there is a curious anomaly in the dimensions.

The entire film was clearly designed on the cheap - and not just in the script department. After the prologue showing Vivian Vedder ordering the coffin and an opening scene on a short section of railway platform, the only sets are the carriage, the dining car and the guard's van (called a 'baggage car' in deference to American audiences), the latter of which is a surprisingly large and unrealistic room. There is back projection of rushing landscapes outside the windows, though most shots avoid pointing in that direction, but otherwise there is absolutely no sense of movement. Clearly these sets were built on a studio floor instead of being built up on springs and rocked by stagehands. Otherwise, the uniformity is broken only by a moderately exciting, if arbitrary, sequence in which Holmes is thrown out of a door by an unseen assailant but manages to hold on, breaking a window to climb back in. The broken window, incidentally, offers neither a draft nor the roar of the train wheels.

Nevertheless, what it lacks as a detective story, the movie almost makes up for in terms of characterisation, with a particularly entertaining comic subplot between Watson, trying to do some investigating on his own, and the abrasive Kilbane. One interesting point is that, in the dining car, Watson and Duncan-Bleek have a curry which reinforces their bond of shared experiences in India; this must have seemed quite an exotic dish to audiences in 1946. 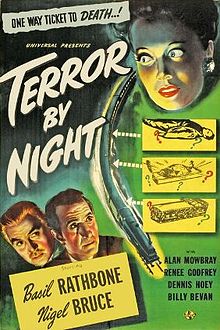 The undertaker in the prologue is played by Harry Cording, who met pretty much all the great monsters in a career that encompassed The Black Cat, Charlie Chan in Paris, Son of Frankenstein, Tower of London, The Invisible Man Returns, The Wolf Man, The Ghost of Frankenstein, The Mummy's Tomb, Abbott and Costello Meet Dr Jekyll and Mr Hyde and no fewer than nine of the Rathbone/Bruce pictures. Also in the cast are Leyland Hodgson (The Mummy, British Intelligence, three Mr Moto pictures, two Invisible Man movies, The Adventures of Captain Marvel, The Wolf Man, The Ghost of Frankenstein, Bedlam and four other Sherlock Holmes films) and Colin Kenny (whose career kicked off with two Elmo Lincoln Tarzan films in 1918 and stretched through to the mid-1960s, incorporating Bulldog Drummond Comes Back, a couple of Charlie Chans, The Invisible Man Returns, Dr Jekyll and Mr Hyde and The Manchurian Candidate!).

Frank Gruber wrote this and the final Rathbone/Bruce picture, Dressed to Kill, as well as Bulldog Drummond at Bay, a stack of westerns and episodes of 77 Sunset Strip. Cinematographer Maury Gertsman also lit Dressed to Kill, Rondo Hatton-starrers House of Horrors and The Brute Man, The Creature Walks Among Us, How to Make a Monster, The Four Skulls of Jonathan Drake and Mr Ed! This public domain movie looks perfectly acceptable on a Classic Entertainment triple bill disc along with Sherlock Holmes and the Secret Weapon and Dressed to Kill.

There are plenty of worse films than Terror by Night out there, in fact it's a fun way to pass an hour. It's just not really a Sherlock Holmes movie.