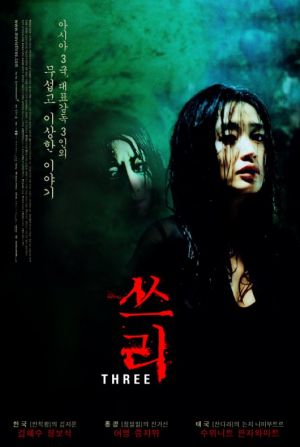 New to Asian cinema and not sure which country’s films you want to explore? Why not try this convenient sampler movie, a horror anthology comprising three segments of 40 minutes or so from three Pacific countries. Applause Pictures (Hong Kong) and Cinemasia (Thailand) had previously collaborated on the dramas Jan Dara and Montrak Transistor, and for this movie South Korea’s Bom Productions was brought into the fold.

The first story is Memories, written and directed by Korean hotshot Kim Jee-Woon whose directorial debut The Quiet Family was ‘remade’ by Takashi Miike as Happiness of the Katakuris. Jung Bo-Seog (Virgin Stripped Bare by Her Bachelors) stars as an un-named man who is starting to go mad since his wife (Kim Hye-Soo: Dr K, Eternal Empire) disappeared and can see her ghostly apparition (a stylistic nod to Ring’s Sadko). At the same time, the wife (neither character is named) wakes up on the street and wanders around, trying to work out where she is and indeed, who she is.

This is a very stylish, slow-paced film - it opens with an agonisingly slow closing-in shot which barely merits the term ‘zoom’. While it’s fairly obvious that there is some sort of Carnival of Souls deal going on with the wife, the resolution is suitably shocking and unexpected and really very nasty.

Nonzee Nimibutr, who directed the Thai segment The Wheel, was an award-winning director of TV commercials and pop videos before scoring a smash hit when his second feature Nang Nak outgrossed Titanic at the Thai box office. Internationally, he has established a reputation as a producer, being the man behind both Bangkok Dangerous and Tears of the Black Tiger. For Three, he co-wrote a story with Nang Nak art director Ek Iemchuen but the finished screenplay was written by Nitas Singhamat. 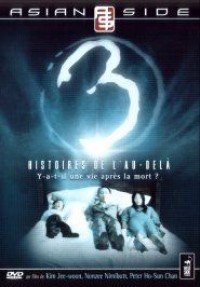 The Wheel is based around a Thai theatrical troupe, highlighting the intense rivalry between the lowly masked players and the respected puppeteers, and the tradition that puppets must not be used by anyone except the puppetmaster who created them.

Puppetmaster Tao suffers agonising visions after his wife and child are drowned while following his instructions to “drown the puppets”. After Tao also dies, mask actor Master Tong (Pongsanart Visiri) sees his chance to take over the puppetry and move up a caste. He tries to remake the puppets and claim that they are new ones, but the curse holds him in its sway, destroying not only him but also the troupe’s young stars/lovers through the supernaturally orchestrated jealousy of his son/apprentice Gaan (Suwinit Panjamawat: Tears of the Black Tiger).

Puppets are always scary. From the ventriloquist’s doll in Dead of Night through to Chucky in the Child’s Play movies and beyond, those grinning, lifeless mockeries of real people can, when well-handled, scare the life out an audience. The puppets in The Wheel are traditional, scary-faced Thai demons and though they never ‘come to life’ they exert a terrifying influence over those who seek to control them. With some gruesome, ghostly goings-on and a shadowy, night-time setting, The Wheel is easily the scariest of the three segments in Three.

The Hong Kong segment, Going Home, was originally announced as being directed by Teddy Chen (Purple Storm) but in the end he received only a ‘story by’ credit (along with Su Chao-Pin). Detective Chan Kwok-Wai (Eric Tsang: Project S, Gen-X Cops) and his young son Cheung (Li Ting-Fung) move into a semi-derelict apartment block, the only other occupants being the mysterious Yu Fei (Leon Lai: Wicked City) and his wheelchair bound wife Hai’er (Eugenia Yuan). Cheung is perturbed by Yu’s young daughter, a little girl in a red coat (a nod to Don’t Look Now of course) but his father tells him not to be silly.

When Cheung goes missing, Chan naturally makes an enquiry of his only neighbour and finds himself trapped by the deluded Yu whose wife - though he has conversations with her - is not so much paralysed as dead. But there’s a lot more to the story than a simple Psycho knock-off: Yu is suspicious of western medicine and is using traditional Chinese medicine to cure/revive Hai’er. Like all the best ghost stories, Going Home has not just a simple twist at the end but a succession of increasingly horrific/enigmatic revelations. 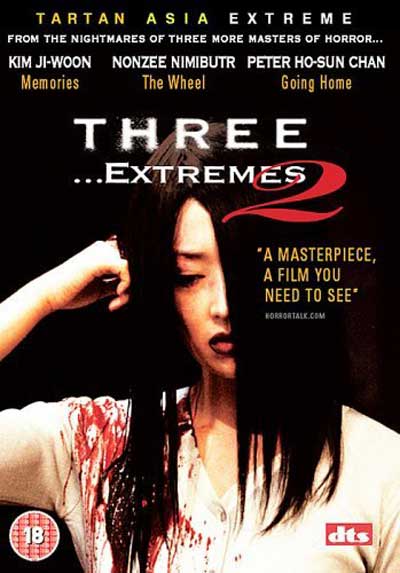 Peter Ho-Sun Chan is the director (with, interestingly, an Australian DP, Christopher Doyle: Rabbit-Proof Fence, Psycho remake). Chan helmed He’s A Woman, She’s a Man, was named as one of Ten Directors to Watch by Variety in 1998, and more recently produced the superb HK/Thai horror flick The Eye.

There are rumours that Three, following its success at a couple of film festivals in London, may be heading for a UK theatrical release, but I jumped the gun on this one and picked up a Thai VCD, which has a decent widescreen transfer, though it naturally suffers from typical VCD artefacting and The Wheel in particular is overly dark. But it was only a fiver, though I’m going to spend as much again anyway when/if this comes to my local cinema. Being the ‘International Version’, this disc has good English subs (though there are a couple of spelling mistakes in them) and also includes a trailer for Three (which interestingly shows the films in the order: Memories, Going Home, The Wheel) plus trailers for The Eye (in Thai) and Michelle Yeoh’s action fantasy The Touch (in English).