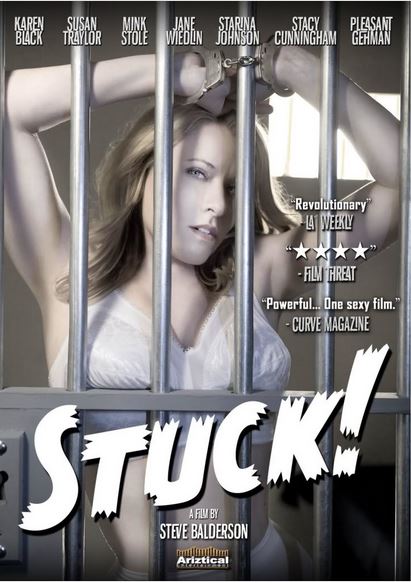 I know some people think that my reviews are overlong so, for folks with short attention spans, here’s a capsule review of Steve Balderson’s women-in-prison flick Stuck!:


Stuck! is just as terrific as all of Steve’s previous films. Buy it, rent it, programme it in your film festival. The Balderson boy does not disappoint.

Now some more detail for those who want it.

Regular visitors to my site will know the name of Steve Balderson (who is actually a distant relative of 1930s Universal creature feature scripter John L Balderston). Steve has directed three previous narrative features: the impressive and darkly wry Pep Squad, the visually and narratively jaw-dropping small town epic Firecracker and the truly extraordinary, provocatively transgressive adaptation Watch Out. He has also directed four documentaries and one non-narrative film.

Steve Balderson is the best-kept secret in American independent cinema. He makes his own films - which are unfailingly brilliant - and the rest of the world very, very gradually catches up with him. Those of us who have discovered his work are a privileged few, though our numbers grow with each new film and through word of mouth.

One thing that distinguishes Steve’s work is variety; every new film is completely different to what has gone before (the Wamego documentary trilogy notwithstanding). With Steve, we can expect the unexpected but even I was surprised when he announced he was making a WIP film.

That’s Women In Prison. Here’s the Wikipedia entry in case your familiarity with the genre extends no further than Prisoner: Cell Block H. Note the line about obligatory elements - because Stuck! proves that none of those are obligatory. 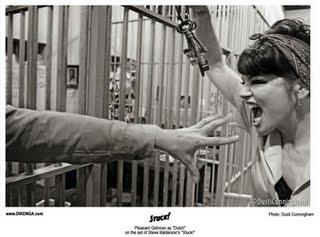 They said it couldn’t be done but Steve Balderson has proved them wrong: he has made a non-exploitation WIP movie. It’s a drama, it’s a love story, it may even be a social polemic. But it’s not trash. It’s not even particularly camp, although it is played with an archness, a structured, measured hyper-reality which is one of the distinctive features of Steve’s work. There’s not even any nudity apart from one brief flash of Pleasant Gehman’s tits.

The very cute Starina Johnson (the pony-tailed babysitter in Watch Out) is Daisy, a never-been-kissed shop assistant whose life is dominated by caring for her ill mother (September Carter). When Mama, depressed, decides to take her own life, Daisy tries desperately to stop her - but fails. What is more, she is accused of matricide, found guilty and sentenced to hang.

On Death Row, she has four companions. Balderson regular Gehman is Dutch, Daisy’s new neighbour: a bisexual prostitute in fishnets, convicted of murdering the bent cop who was her John. Dutch’s cellmate is Bible-thumping evangelist Esther (John Waters alumnus Mink Stole whose many other credits include David DeCoteau’s Ring of Fire, Don Glut’s The Vampire Hunters Club and the 1995 Bucket of Blood remake) who gunned down several government agents in the name of the Lord when they came to arrest her for tax evasion. In the far cell are Meme (Susan Traylor: Firecracker, Lord of Illusions), a professional widow who poisoned four husbands before she got caught, and mentally retarded Princess (elfin pop goddess Jane Wiedlin, unchallenged as the official Coolest Woman in North America for yet another year) who drowned her baby and only ever speaks by repeating what Meme says. Meme and Princess have a weird, quasi-sexual, quasi-maternal relationship. Esther considers the three dykes around her to be blaspheming sinners and prays for their souls on a regular basis. 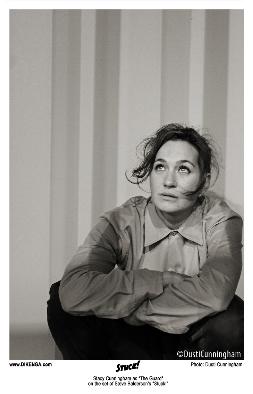 In a strong cast, the stand-out performance is Stacy Cunningham (Earthling, The Locker) as the Guard, nicknamed ‘Amazon’ by the inmates. She is fantastic, making the character both unrelentingly brutal and human at the same time. It would have been very easy for Amazon to have been a one-note role - heck, it would be easy to make any of these characters one-note. In fact, within the WIP genre, one-note roles are almost obligatory. It’s a tradition or an old charter or something. But there is a reality to ‘The Guard’, even as she torments and abuses the prisoners, that belies the character’s apparent sadistic monomania. Cunningham never goes over the top, never loses the reality of the character. She’s a very human monster.

It’s a corking cast, isn’t it? Six actresses who, despite limiting almost all their scenes to one set of three cells and a corridor, create a whole world on screen populated by characters we grow to appreciate, understand, maybe even care for. With superb precision, Balderson gives the five inmates one solitary, brief fantasy sequence in which the two couples dance - in beautiful dresses, in a beautiful room - to Esther’s charmingly empathetic piano. This is incidentally pretty much the only chance that Jane Wiedlin has to break away from her character’s naive intensity (and bad hair day) and it is obvious from this scene (and some behind the scenes footage - check out the unplugged version of ‘Our Lips are Sealed’) that she hasn’t aged a day since her scene-stealing role as the Communications Officer in Star Trek IV. Painting in the attic - that’s the only explanation.

At first, Daisy has difficulty adjusting to her new surroundings: the amorous attentions of Dutch, the holy fanaticism of Esther and the weird relationship in the end cage - not to mention the abusive swaggering of the Guard. But halfway through the 93-minute film an unexpected event shakes Daisy up and from then on things get heavier for all concerned, not least in the increasing camaraderie between the imprisoned quintet. 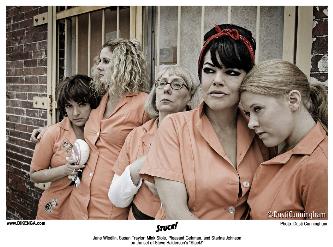 Contrasting with the prison scenes is a subplot about Daisy’s neighbour (Karen Black - don’t even try to pretend that you need me to tell you who Karen Black is, don’t make me come down there...) whose curtain-twitching testimony was integral to the young woman’s false conviction. This unnamed neighbour knows what she saw but, with what is presumably a nod to Dario Argento, did she actually see what she thought she saw? We know the truth but she is gradually worn down by stomach-twisting doubt. Has she inadvertently sentenced an innocent girl to death? Will her story cross with Daisy’s before the credits roll? Black drags every ounce of torture and tragedy out of this situation.

We never see any other inmates at this unnamed prison but we do see the warden, played by Betti O, who is the only performer to have appeared in all four of Steve Balderson’s narrative films. She sits in her dark office, watching events unfold on CCTV, and though she occasionally barks orders down the phone, we never hear her voice. It’s a typically Balderson-esque quirk which enhances, rather than limits, the actress’ fine performance. Jeff Dylan Graham (Watch Out, Beyond the Dunwich Horror, Dorm of the Dead) and voluptuous burlesque babe Lady Monster round out the principal cast.

The script was written by Frankie Krainz, unforgettable as the Desk Clerk in Watch Out. He was also in Rich Ambler’s serial killer biopic Raising Jeffrey Dahmer but he doesn’t appear on-screen in Stuck! (unless he’s an uncredited extra) because he’s primarily a writer. Krainz and Balderson met in Kansas City in 2007, got talking about WIP films and two weeks later Frankie presented Steve with a screenplay which, with relatively little modification, is what is on screen. And it must be said that the matching of Steve’s direction and Frankie’s words works perfectly.

One point that I have not yet mentioned - although it might be obvious from the stills on this page - is that Stuck! has been filmed in black and white, which makes an interesting contrast to the almost saturated colour of Firecracker (the non-monochrome parts of it, anyway). That said, although the photography is crisp and clean it seems to lack something. It felt more like watching a colour film on a black and white TV, unlike the monochrome richness that Firecracker DP John Torreano was able to wring from the non-carnival scenes in that film. This was an advance screener however and there may be more post-production tweaks up Steve Balderson’s sleeve.

Trying to put my finger on my dissatisfaction with the photography - which is an unbelievably minor matter but with films this good there only needs to be one fly in the ointment - I think the problem is that it is too crisp and clean. It needs roughing up in some indefinable way to reflect the subject matter. This is a grubby, scuzzy story about grubby, scuzzy people (in a slightly glam sort of way!) and the image doesn’t match the narrative ambience.

I’m not saying that the film-look needs ageing, because one unanswered question is when this is set. (In a more enlightened country, like this one, we could at least say well, it is definitely pre-1964. But this is the USA.) There’s a sort of late-1950s/early 1960s vibe to the clothes and the hairstyles but since most of the characters spend the entire film in prison duds or uniform, that’s not so helpful. The phones are bakelite; you can often date a film’s setting by the phones. But things like CCTV cameras and TV remote controls suggest later. It’s a timeless time in a placeless place, a when that is no more important than the where.

A quartet of co-producers include Beth and Elliott Dunwoody of Macon GA-based Bright Blue Sky Productions, Tony Long Jr (a massive Karen Black fan who runs the Macon GA Film Festival with his dad) and Steve’s Wamego neighbour, website designer Dan Holmgren. Although Frankie Krainz has the main screenplay credit, Steve and Jon Niccum are credited with ‘contributions’. Niccum played Mr Barrows in Watch Out, was one of the callers in Phone Sex and has written several short horror films for another Kansan director, Patrick Rea. Composer Rob Kleiner also did the score for Watch Out (and was also a Phone Sex caller) while another returnee from Steve’s last film is brilliantly named sound guy Tyrell Johnsrud. 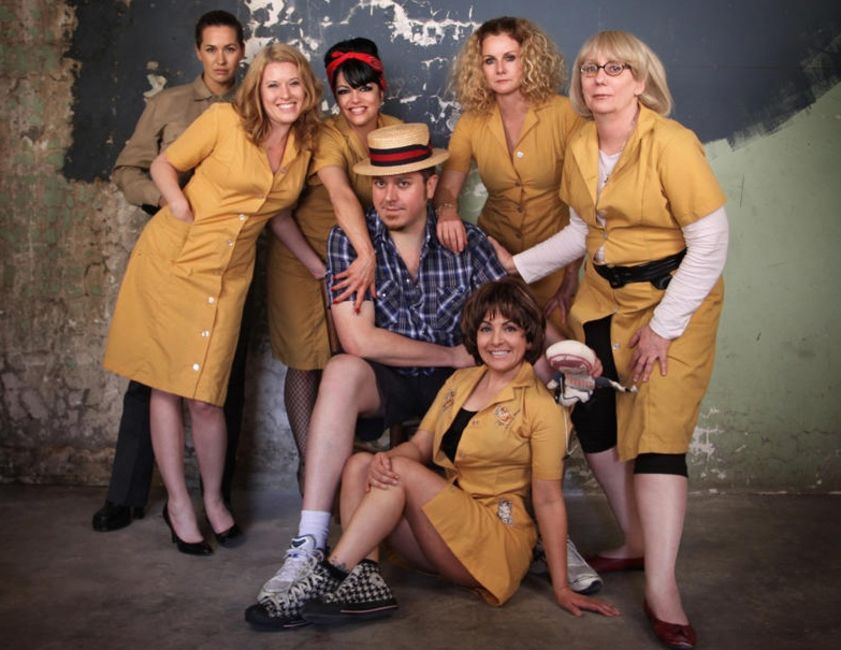 Stuck! is an unexpectedly powerful, skilfully managed slice of women-in-prison drama that never teeters into camp even while it threatens to put its tongue in its cheek (or someone’s cheek at any rate). A slew of excellent performances embellish an absolutely terrific script and Steve B pulls it all together with the magnificently, practised touch of a film auteur who is secure in his environment.

It’s another belter. I can’t wait to see what he does next.