When Lois and Clark: The New Adventures of Superman was showing in the UK, SFX ran a big feature and between us we talked to pretty much everybody involved. One of the interview gigs I was able to land was Lane Smith, Perry White himself. Lane talked to me by phone on 16th February 1996. He passed away in June 2005. 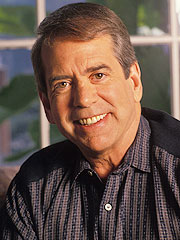 We're all big fans of Lois and Clark over here.
"You know, I ran into somebody this morning who told me it was the number one American show in a lot of places in Europe."

It's probably number two over here.
"Is Baywatch number one?"

I think The X-Files probably is. Season three of Lois and Clark starts tomorrow.
"I see, so it's going to be about four months before you get into this wedding stuff and everything."

So they do marry then!
"Well, they marry, but are they really married? It's one of those type of deals."

How did you get the role of Perry White?
"It's kind of interesting because I wasn't crazy about doing a television series. I was doing right well in the movies and everything and they sent this script over. I thought, 'Well, I'll go over and I'll do something outrageous. They'll never buy it in a million years, but I'll do it.' I went over there and auditioned and they called back in an hour and we started making a deal."

Are you a Superman fan yourself?
"Not really, no. I never really watched it. I call this series 'the golden goose' - it's strictly a money job as far as I'm concerned. That's what television's all about. I much prefer doing movies. In fact I just finished a little movie with Emilio Estevez called The War at Home and hopefully I'll be able to do a couple of movies during my hiatus period." When Lois and Clark started, did people expect it to be as successful as it has been?
"What happened with the show was that it got wonderful reviews because it's tongue in cheek. So it got these critical people all saying that they thought it was a terrific show, and it was doing okay. Then after the first year what they essentially did was turn it into kind of a cop show: Lois and Clark solving crimes. They're really like two detectives or two cops. They made it much more action-orientated. They put Superman in the Superman outfit much more than he was. It was really an old-fashioned format that they turned it into, and it took off. We are consistently in the top 20 over here, and most of the time it beats out all the competition on the 8-9 time slot that we have on Sunday, which is like the prime time of the prime time. That's the biggest hour of the week."

When the series started was there any worry about taking an icon as potent as Superman and reinventing him?
"I think that's the only reason it got on the air, to tell the truth, because it was reinvented. I don't think anybody was interested in doing a Superman series with the old format. The woman who originally created the show, she had this idea about Lois and Clark and their relationship. You see, the first year it was more of a character-driven show. I guess everybody knows - at the end of the first year they fired everybody and turned it into an action adventure show which has really made it take off. But the show wouldn't ever have gotten on the air unless there was a whole new tack taken with it."

How consciously do you try to make your Perry White different from other ones?
"Oh, I've never even seen the Superman stuff. I just try to create an outrageous character. He's bombastic and two minutes later he's a softie. But the main thing I tried to give him was a sense of humour about himself and a sense of humour about the world. I wasn't remotely interested in other people. It's a comic strip, and I don't think anybody's ever done justice to Perry White. They've usually been straight men who've played the part, and my main thrust is having a lot of fun with it." 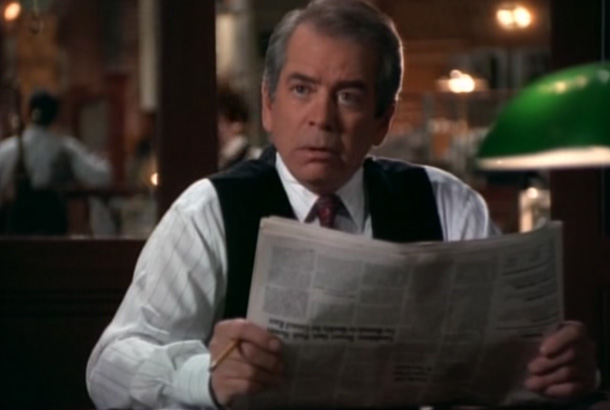 Would you like to see more episodes where Perry becomes integral to the main plot?
"Well, that was the first year. I had my own storyline every third or fourth episode, and since they've turned it into a cop show that's not likely to happen now. Like I say, I call it 'the golden goose'. I just go in about two days out of every ten and laugh all the way to the bank. I don't mean to be cynical about it, but that's what happened to me, when they turned it into an action adventure. It lost the sense of character that it had before as a show."

So clearly you were happier with the first season.
"I had more to do, yes."

The great strength of the show is that it's tongue-in-cheek. Do you have to be careful not to go overboard into broad comedy?
"Well, I try to do comedy. As long as you're real you can push the envelope a little bit, you can get outrageous with it. When you have someone who's a superman you can take a lot of license with stuff."

Was it difficult adjusting to the new Jimmy Olsen in season two?
"Justin Whalin is a terrific guy. It was a little funny because the other Jimmy, Michael Landes, we had our whole relationship worked out and all that, but that went by the boards with the new format. So it wasn't that big a transition." The other TV series that our readers will know you from is V. You played a corrupt senator, yes?
"Many, many years ago, yes."

What was that like to work on?
"Actually, the guy running this series now, Bob Singer, was the executive producer of that series. After they fired everybody, he came in and became our executive producer. That was fun to do. That was the first television series I ever did."

You've done a few fantasy movies, like Prison and Bridge Across Time. Do you approach fantasy stuff differently?
"You know, I took a right-hand turn after I played Richard Nixon in William Bernstein's The Final Days and I concentrated mainly on comedies. I did five movies in a row that were comedies: My Cousin Vinny, The Son-in-Law, The Scout, The Distinguished Gentleman with Eddie Murphy, and The Mighty Ducks. I just went towards comedy, and this series is part of that. I also did another series in the last five years called Good Sports with Farrah Fawcett and Ryan O'Neill." 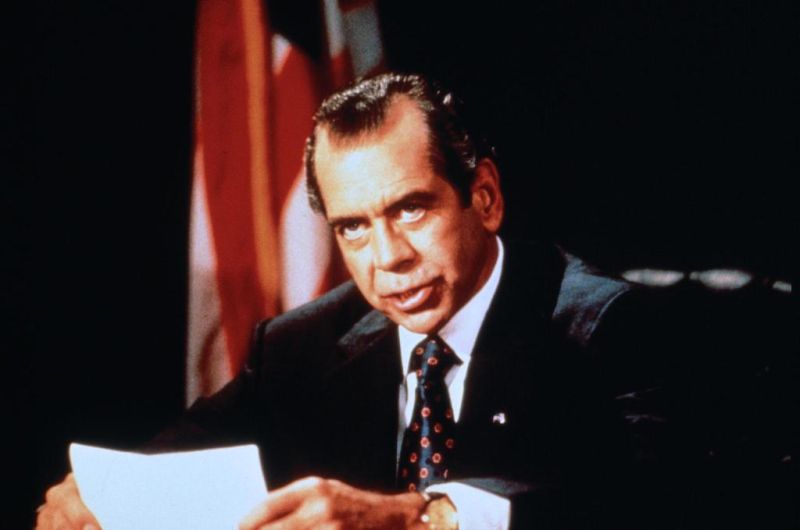 Have you seen the Anthony Hopkins version of Nixon?
"Yes. You know, I love Anthony Hopkins. I think he's a brilliant actor and he gives a brilliant performance, but I think he was miscast as Nixon. I think the big difference is that we tried to show Mr Nixon as he might see himself. And I think what they tried to do was Oliver Stone's version of Nixon. Ours was a much more subtle approach to it all, I think. He went off with the facts. He invents stuff, Oliver Stone. But it's drama, it's good drama to watch. We were more along the lines of a docu-drama. We tried to make this as close to reality as we could."

Another true story that you did was Challenger. I can imagine that must have been quite difficult.
"Well, it was. It was very interesting for me because when I was a young man, when I had to do my stint in the army I was put on a civilian status job and sent down to Santiago, Chile. I was down there when we got our very first satellite into the air and tracked that very first satellite. So here I was many, many, many years later, down in Houston at the Control Centre. It was quite emotional for me, because I was in on the very first step of the space program. And of course, it was sensitive because all of those people had been killed essentially because of this O-ring factor that everybody had been warned about and ignored. That was the horror of it." 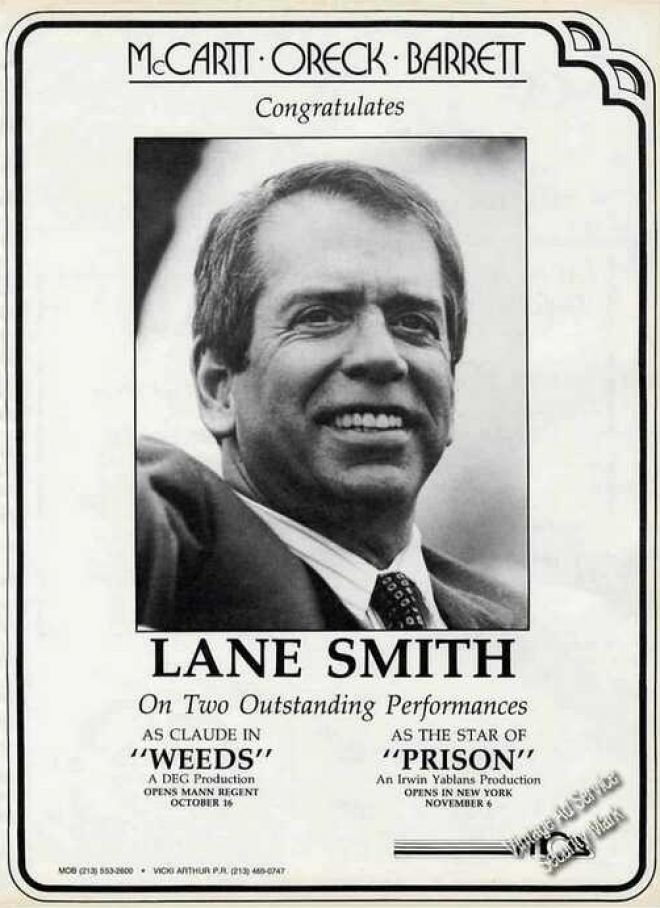 My CV for you starts with Man on a Swing in 1974. Was that your first movie?
"Oh no. I don't know what you've got there. I did movies before that. I started my professional life in 1960 in New York. I was based there for many many years, 18 years almost. I did films with the first ten years - '60-'70 - I can't think of the ones. But I was basically a stage actor for many years, based in New York. I had a big break there; I did the lead in One Flew Over the Cuckoo's Nest, which I ran in for almost two years. Then I went back about eight years ago and I did David Mamet's Glengarry Glenn Ross which won the Pullitzer Prize and everything."

You've played a lot of authority figures: mayors and senators and policeman. Are you happy with that sort of type-casting?
"I don't know. I have a presence and an authority as an actor. I look at each role as a little bit different. I'm a character actor, but I try to create a character. You look at the role I played in My Cousin Vinny, you don't see the same actor doing The Distinguished Gentleman or The Coach. I try to make every character that I do different. I try to mould myself into the part."