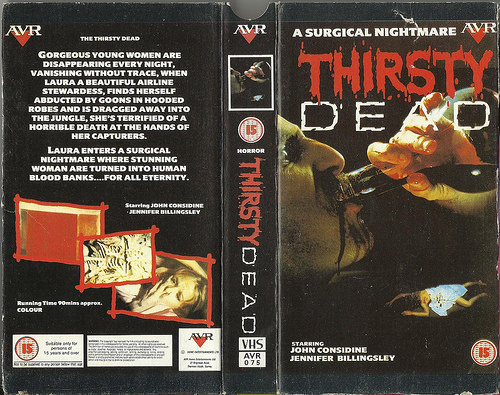 Never judge a book by its cover, but a sleeve can tell you a lot about a video. Firstly, the title is given as just Thirsty Dead on the front and spine instead of the correct The Thirsty Dead (as on screen and indeed on the back of the sleeve). Both front and back of the sleeve proclaim the film to be “a surgical nightmare” and while you could argue that there are nightmarish elements, there is not a hint of anything surgical. And the main picture of an unshaven bloke swigging blood from a laboratory flask - God alone knows where they got that or what it’s supposed to be!

The Thirsty Dead, like all great horror movies, begins in a seedy Filipino night club where a go-go dancer is gyrating wildly (and frankly, rather amateurishly) in a cage for the amusement of sailors and other patrons. This is sassy Claire (former Miss Pennsylvania and daytime soap star Judith McConnell - or Mc Connell as the credits have it - from The Doll Squad) who hears an announcement on the radio about a rumoured Hong Kong-based white slave operation (“For the second time in 48 hours, a young woman has disappeared from the streets of Manila.”) moments before she is kidnapped. 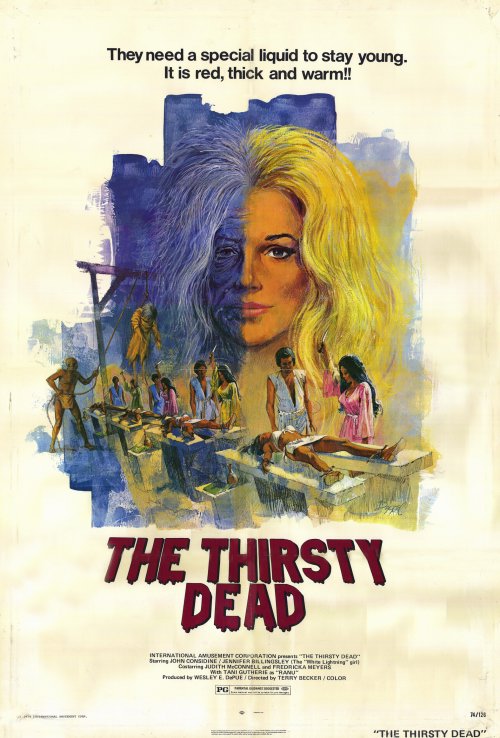 The police are baffled: “Seven girls in a month. All young, all attractive. No motives, no clues, no ransom notes, no bodies.”

Next we meet Laura (Jennifer Billingsley: The Spy with My Face) who is an “airline stewardess” according to the sleeve though that’s not stated in the film and who has an amazing head of Farrah Fawcet-style hair. She is telling her boyfriend Francisco (Rod Navarro: Armalite Commandos and the 1955 classic - probably - Bim, Bam, Bum) why she won’t marry him and moments after they part she too is grabbed by hooded mysteriosos. Taken through the sewers out of the city then up a river into the jungle, she joins three other young women: blonde teenager Ann (Fredricka Myers), oriental Bonnie (Chiqui de Rosa) and our old friend Claire, who is frankly looking forward to being a white slave in Hong Kong.

But they’re not off to Honkers. Instead the girls' captors drop their robes revealing themselves to be bald, mute, loincloth clad men who shepherd the women through the jungle. There are a great deal of ‘walking through the jungle’ shots in this film...

In a secret network of caves deep inside a mountain live a community of beautiful people who are immortal and who spend their days making jewellery and pottery. They are led by High Priestess Ranu (Tani Guthrie: Daughters of Satan) and High Priest Baru (John Considine: When Time Ran Out, Doomsday Virus, Fat Man and Little Boy and, um, Free Willy 2), the former High Priest having somehow died 500 years ago. He is called Raoul or Ramon or similar (difficult to make it out) and now exists as a disembodied head in a red glass box atop a stone table. 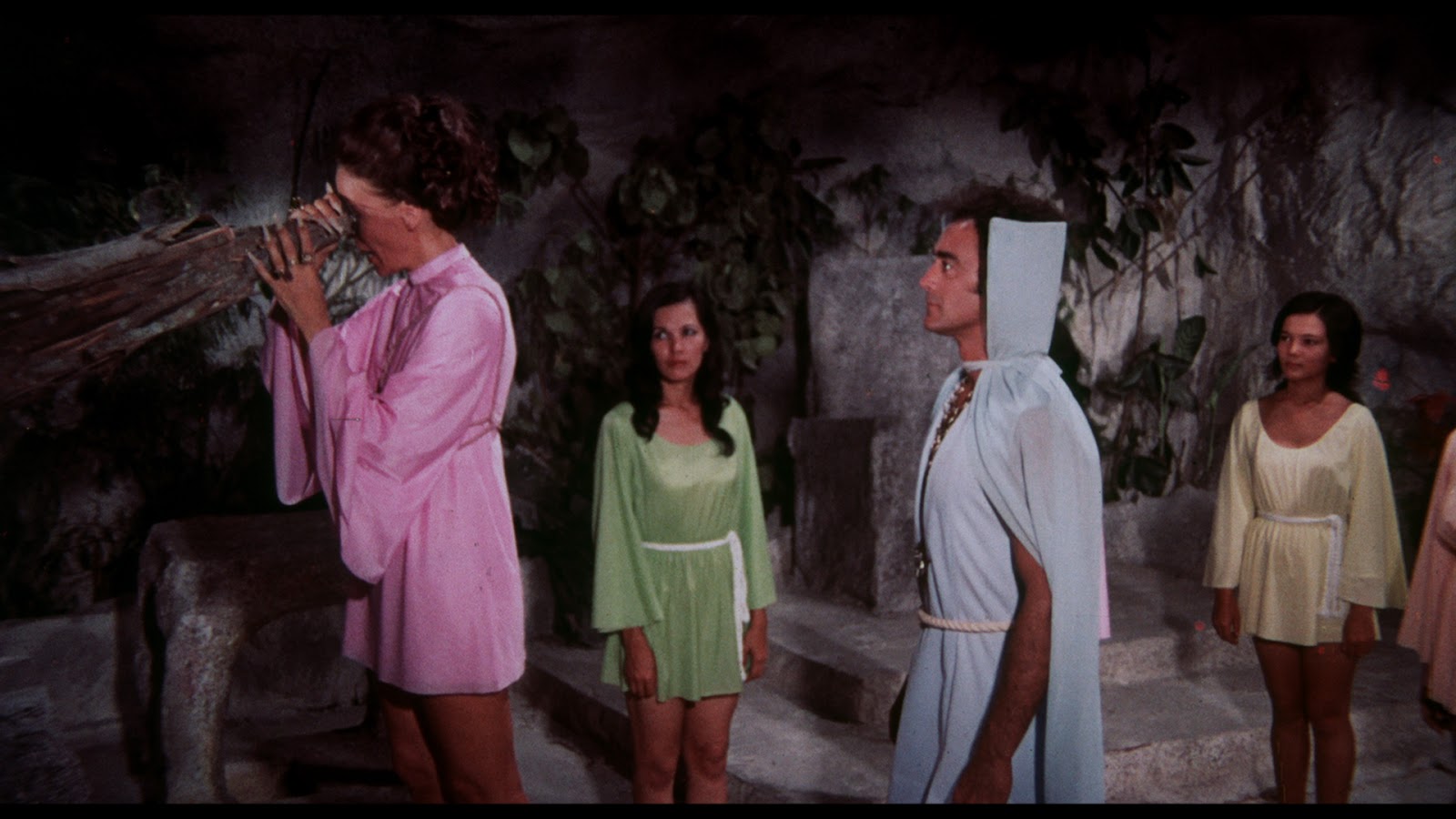 The people are all garbed in simple, pastel-coloured dresses and smocks - though Baru also has a pale blue cloak with a huge stand-up collar - and with the extensive use of hopelessly unrealistic cave sets, the whole film consequently looks alarmingly like a 1960s Star Trek episode.

Claire, Ann and Bonnie are all going to join the group of young women whose blood is used to keep the immortals alive. The girls lie down on stone slabs and a nick is made in their neck from which blood is collected in a cup. A magic leaf heals the nick and the blood is mixed with the essence of the leaf then drunk. Laura is offered the chance to join the immortals because she looks exactly like the one that the prophecies talked about yada yada yada but she turns them down, much to the shock of Baru and Ranu. Laura wants to stay with the other three but Baru shows her what will happen to them; they will rapidly wizen and age and then die.

Laura, Ann, Bonnie and (against her better judgement) Claire escape with the help of a wizened old crone named Eva (Mary Walters) and receive shelter from a jungle village - but Baru finds them and takes them back. However, he is starting to be swayed by Laura’s arguments about how immoral the whole set-up is. Baru says that they worship only beauty but Laura says that their actions make them ugly. So eventually Baru decides to help the girls escape by freeing the locked up old crones. (Eva has died by this time. “She was 28,” says Baru. “Brought here five years ago.”) The sight of unkempt troglodytes attacking beautiful people in pastel outfits is very reminiscent of the Morlocks and Eloi in George Pal’s version of War of the Worlds. 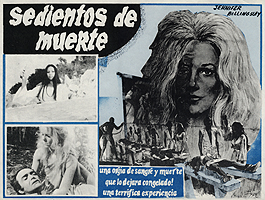 Claire doesn’t want to escape, she wants to become immortal: “I’m pretty. I’ve got a good body. They’ll take me.” Laura chases her through the stone tunnels until Claire falls into a pit and dies. Baru then leads the other three to the outside, but when they pass the ‘ring of age’ (some markings on the rocks) he starts to age rapidly by the miracle of lap dissolves and the girls leave him. They eventually make it to a road and flag down a passing jeep, but a subsequent police helicopter search shows nothing on the mountain which is unclimbable anyway. Or is it?

What a load of tosh this ‘International Amusement Corporation’ production is. The promise of a nasty horror movie is betrayed by the daft sub-Shangri-La plot (Blood Cult of Shangri-La is actually given as an alternative title by some sources, as is Blood Hunt). It’s competently enough made and the acting’s not too bad, but frankly it’s just not very interesting, with the high point being Claire’s ambivalent attitude to her kidnapping. The legendary Vic Diaz (Beast of the Yellow Night, Night of the Cobra Woman, Wonder Women, The Big Bird Cage) turns up at the end as a policeman and was also production co-ordinator, but even that’s not enough to make me recommend this movie.

This seems to be the only feature from director Terry Becker, who also helmed episodes of M*A*S*H, Mission Impossible and short-lived musical-spin-off sitcom Anna and the King. Charles Dennis (Double Negative, a TV movie of Svengali and The Jayne Mansfield Story, also a novelist and actor) wrote the screenplay from a story by Becker and Lou Whitehill (Wonder Women). 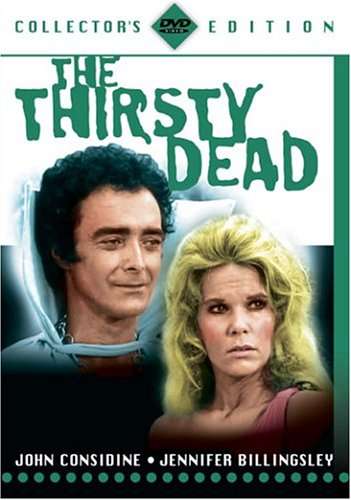 Cinematographer Nonong Rasca also shot Superbeast, Night of the Cobra Woman and Daughters of Satan while art director Robert Formosa worked on Black Mama White Mama, Savage Sisters and The Twilight People. Make-up artist Cecile Baun went on to do prosthetics for both Platoon and Hamburger Hill! The most impressive name here is composer Richard LaSalle, whose other credits include The Mermaids of Tiburon, Twice-Told Tales, The Time Travellers and for TV: Lost in Space, Land of the Giants, Planet of the Apes and Wonder Woman!

The Thirsty Dead is utterly typical of mid-1970s Filipino fantasy movies - except that it has a lot less blood than many of them and no nudity whatsoever. It’s okay, nothing more, though it might look better on DVD as this ex-rental tape is a lousy transfer of a lousy print. Incidentally, many sources shoe-horn this into the vampire genre because of the eternal-life-from-blood-drinking theme, but it should be stressed that the characters are not particularly thirsty and they’re certainly not dead.