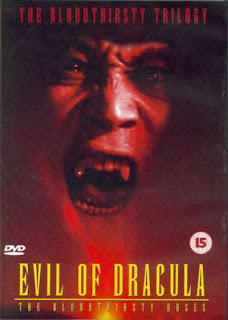 The second film to be released in what Artsmagic are calling ‘The Bloodthirsty Trilogy’ (although the third to be filmed) is Chi o Suu Bara, known in English as Evil of Dracula and here subtitled The Bloodthirsty Roses. This is considerably better than Michio Yamamoto’s previous vampire film, Lake of Dracula, largely because it actually uses some themes from Dracula - though as with Lake, Toho’s international sales title is misleading because the vampire in question is clearly not the Count!

Mori Kishida dons the fangs again, although here he is the principal of a girls’ high school. This is more Stoker-esque, contrasting the character’s outward respectablity with the monstrous figure eventually revealed, whereas in Lake all we saw was the monster. Kishida is still not a great actor - and the character still wears that amusing white polo-neck jumper - but at least here he is biting young girls on the neck, rather than just growling and wrestling.

Toshio Kurosawa (The Water Margin, Lady Snowblood) plays Shiraki, a teacher who arrives at Seimei Girls’ School before the start of term. The only other residents are the principal (mourning his recently deceased wife), oddball French Literature teacher Yoshii (Katushiro Sasaki) and a trio of boarding students (Oota Mio, Moriko Mochizuki and Aramaki Keiko). Shiraki ‘dreams’ that he sees two vampires - the principal’s wife and a teenage girl - in a scene reminiscent of Jonathan Harker’s encounter with Dracula’s vampire brides. Shiraki begins to wonder if the encounter was real when he recognises the girl as a recently dead student, then town doctor Shimimura (Kunie Tanaka: Kwaidan, The Yakuza Papers) explains some local legends about bloodsucking demons and the two men set out to expose the principal as a vampire. 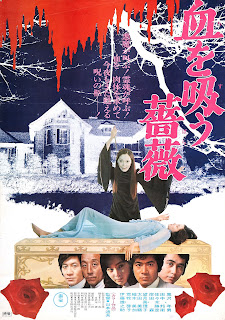 Though it drags a little at first, Evil of Dracula builds to an exciting conclusion and features some genuinely unsettling scenes, both creepy (a hand rising from a coffin behind the oblivious Shiraki) and gory: a face-removal scene (shades of Les Yeux sans Visage?) which is truly nasty. Surprisingly, the BBFC have only rated this 15, even though it also contains that traditional no-no a dribble of blood on an exposed breast.

The vampire’s eventual demise is also pretty horrific. And yes, there are some roses in it, one of which features in an odd but imaginative FX shot. The other film in the unconnected trilogy (same writer and director, but that’s it) is Legacy of Dracula/The Vampire Doll, also available from Artsmagic.