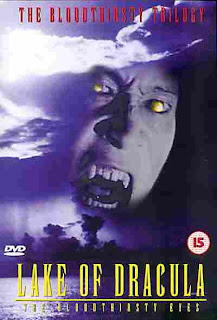 Michio Yamamoto made three western-style vampire movies for Toho, home of Godzilla, Mothra et al, in the early 1970s, of which this was the second. Artsmagic, purveyors of fine samurai videos and DVDs, have now released these on their Shadow Warrior label as ‘The Bloodthirsty Trilogy’ (the others are Evil of Dracula and Legacy of Dracula, though the only links are the writer, the director and the vampiric theme). Lake of Dracula (Chi O Suu Me) is subtitled The Bloodthirsty Eyes.

Midori Fujita stars as Akiko, a painter who still has flashbacks to a nightmare she suffered as a little girl, when she encountered a terrifying man with golden eyes. From nowhere, a mysterious coffin is delivered to her neighbour Kyusaku, an old guy who rents out fishing tackle down by the lake. Of course, we can all guess who comes with it.

A local farmer’s daughter is brought into the hospital where Akiko’s boyfriend, Dr Saeki Takahashi, works - she is pale and has two puncture wounds on her neck - and promptly commits suicide. Vampirised Kyusaku tries to attack Akiko, and her glamorous sister Natsuko, who lives with her, also falls prey to the bloodsucker. Saeki and Akiko trace the Lord of the Undead back to the house near Akiko’s childhood home where she first encountered him - and the final showdown begins.

While it’s fabulous to have a UK release of the legendarily rare Lake of Dracula, sad to report that it’s not a great film; more interesting than entertaining. Fans of both vampire movies and Japanese cinema should certainly search it out, but don’t expect it to be a lost classic.

There’s no real story as such. There’s no motive for Dracula’s attacks, though he mutters something at the end about wanting Akiko for his bride since he saw her when she was five. Characters are even more sketchy than in the sorry 1970s Hammer offerings that inspired this. (Actually, for all that Hammer is always cited as Yamamoto’s main influence, this movie predates Dracula: AD 1972, the British company’s first attempt to transfer Dracula into a present day setting. It’s quite possible that Paul Landres’ superior B-movie The Return of Dracula was more of an influence.) 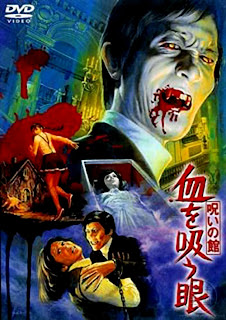 A big problem is Mori Kishida as the vampire (not actually Dracula after all), a poor actor with little charisma and nothing going for him except his height and some golden contact lenses. He is made up so white as to be almost pale blue, but the dark circles round his eyes make him look like a dangerous panda, and he does very little that’s impressively vampiric, mostly just growling or fighting. There’s no transmogrification here, very little visible fantastique. His attractive polo-neck jumper doesn’t help either! On the other hand, there’s some quite effective art direction, with all the starkly monochrome vampires looking like they’ve stepped out of the original Nosferatu into the colourful Toho movie.

Artsmagic have released a good-looking widescreen transfer with only a few tiny speckles at reel changes and only a couple of minor typos in the subtitles. There’s a selection of stills and some super original publicity material, plus a bio of Kishida and a company promo for the Zatoichi movies.