I interviewed Jenny Evans about her role as Cat in Evil Aliens in October 2005 and used part of this in the article I wrote for Fangoria. A few months later I interviewed Jenny again, on stage at Leicester Phoenix Arts, at a screening of that film. Jenny can also be seen in the short films Close Your Eyes and Plastic Reality.

How did you come to be cast in Evil Aliens?
“My then agent sent me along for the casting. I knew nothing about it at all and wasn’t aware it was such a good project (which was a good thing as I was less nervous!). It was only afterwards when I read the script and had a meeting with Jake West and the producer that I realised I had landed on my feet and was onboard a cool project.”

What appealed to you about the role?
“The role of Cat was a really fun one to play. She’s a little offbeat and quirky and I like roles that require that side of me. Pretty quickly things kick off when she gets abducted and her life goes downhill from there with spectacular results - giving me some full-on emotions to work through, which was great.”

What is Jake West like as a director?
“Jake is laidback yet specific in his direction. He knows what he’s after and moves pretty quickly.”

What were the locations like?
“We used various locations, one of which was Wookey Hole Caves (for the underground cavern scenes). It was great as we were there after hours and had the whole place to ourselves to explore, which was very cool. Also, while we filmed in Dorset by the sea we stayed on a caravan site - so when we were off duty it felt like we were teenagers on holiday!”

What were the best and worst things about making this movie?
“The best things:
It was my first feature film, so I was very happy indeed to be onboard.
Getting to really scream my head off - it’s not every day you get to do that!
Being on location in Dorset was lovely. I had a couple of days off while we were there, so it was like a mini seaside break!
Cat’s transformation scene was cathartic - I really let loose.
Getting my body cast was a bizarre experience - scary yet pleasurable all at once!

“The worst things... hmmm:
Those flipping freezing cold night shoots.
All that sticky blood and having to keep it on for hours (all sorts of crap sticks to it) plus having it squirted up my nose was definitely not nice!
Wearing the alien head and arms whilst trying to eat my dinner!
The mouthfuls of disturbing cold miscellaneous soup every time my character had to vomit (I came close to the real thing!).” 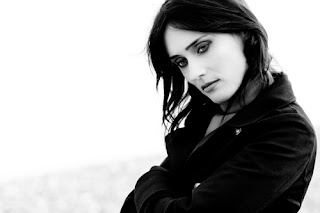 What did you think of the film when you finally saw the completed movie?
“It took two years to finish so by the time I saw it, it was like seeing an old friend! It was very exciting to see what Jake had done with it and I was really impressed with the finished results. It’s a very original British film, which I am very proud to be part of!”