I had never, ever heard of this Texas-shot indie vampire feature and nor have many other people, apparently. I don’t have a single review of it in any magazine in my files and it is, surprisingly, not even listed in Stephen Jones’ Essential Monster Movie Guide. I only bought it because it was on a double bill disc with Project Vampire. But what the heck, I thought, I’ll give it a try...

Melanie Parker (Lisa Watts) and Vickey Anderson (Raney Lasusa) are flatmates. Melanie, whose brunette hair is often piled atop her head, works at the library under the scary head librarian Miss Prigg (Dixie Corrington) while blonde Vickey works in an office with even blonder realtor Evan Murchinson (Brad Cook). Evan and Vickey’s relationship is a bit light-hearted but Melanie is in a serious relationship with stetson-wearing police detective Mark Stovalle (Todd Jones). Unfortunately, every time they have a date he is called away on a case.

Into their world comes dapper and slightly creepy Andrew Frazier (Tim Cobb), who has a neatly trimmed beard, a smashing old-fashioned car and a tall, sinister butler/servant named Filmore (Harry McCord). Frazier buys an old house which Evan has been trying to sell, unsuccessfully, for a number of years - though it is never explained why the house was so notoriously hard to sell. Meeting Melanie in the library shortly after yet another date was ruined (when Mark was called away to a dancer whose throat was ripped open by an unseen assailant in a prologue), he asks her on a date and she accepts. He also uses some sort of hypnotism - a nice optical effect of briefly glowing yellow eyes - to subdue the stentorian Miss Prigg. 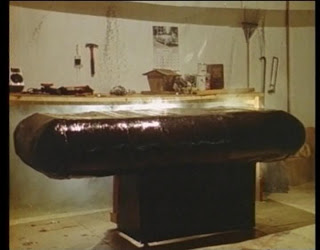 Mark finds himself sidelined in favour of Frazier while also investigating the dancer’s death which bears all the hallmarks of a recent, unsolved spate of serial killings in Dallas - which is where Frazier has moved from. Gradually we see more and more of Frazier’s vampirism: how he shies away from direct sunlight; a weird, rounded coffin which he sleeps in during the day (this is somehow hidden when not in use but it’s not clear how - all we hear is the grinding of off-screen machinery); and a clever and well done scene in which Melanie is standing in the background, hand on Frazier’s shoulder, as Mark argues with his disbelieving boss - but reverse shots of the two cops show Melanie reflected in a mirror, her hand in mid-air. That’s a nice, subtle touch.

Evan is offered a new job in another town and proposes to Vickey but is immediately grabbed and killed by someone. When Vickey comes to in the hospital, it being unclear how/why she escaped a similar fate, she is at first hysterical but later on seems completely calm about her boyfriend having been savagely murdered right in front of her. There is also a scene where four local teens sneak into what they believe is still a deserted house to make out. None of them comment on how well-furnished the house is for something which is supposed to have been empty for years. Three of them are killed - one escapes and is later seen sitting in the police station, shaking, but is dismissed by Mark and his black partner as drunk. We never hear about or see this teenager again and no-one seems bothered that three young people from the town have mysteriously disappeared - and there’s a witness.

It all culminates in a surprisingly well-directed and action-packed fight between Mark - who has come armed with a crucifix/dagger, having worked out what he is up against - and Frazier. There is a final, and not entirely clear, twist ending.

This 1990 production, which looks very eighties as characters parade around in hairspray and shoulder pads, was shot in 1989 as evinced by a poster for Look Who’s Talking at a local cinema. Also dating the film is a copy of Omni in the library. The picture has ‘local indie film’ written all over it and very few of the cast or crew seem to have ever done anything else.

The acting is not great although one or two of the cast shine through and the direction likewise varies. there are one or two editing flubs of character suddenly shifting position between camera angles but on the whole it’s quite well put together, and shot on film which is always a plus point.

Interestingly, the whole vampire angle is very underplayed with no-one even raising the idea or mentioning the V-word until an hour into this 86-minute film. Only in one brief shot do we see Frazier’s fangs. This is a character-driven piece rather than a straight horror film, mixed in with a police procedural and even a little humour.