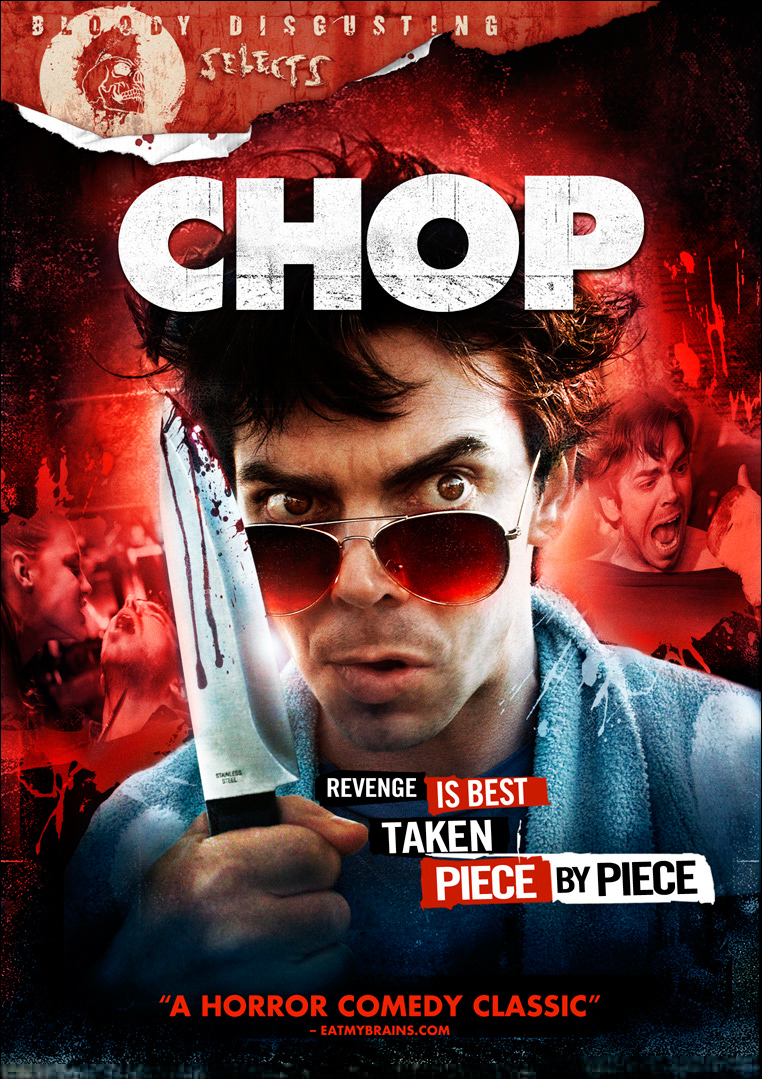 Chop is a Trent Haaga movie and what’s really scary about it is that it led me to realise that it’s nearly 15 years since I interviewed Trent. Back then he was just starting out, having got his first feature writing credit on The Toxic Crusader Part IV, acting in the film too. Since then he has written another dozen or so movies (including Hell Asylum, Deadgirl and American Maniacs) and acted in about 50 including Mulva Zombie Ass Kicker, Dead and Rotting, Dr Horror’s Erotic House of Idiots, Easter Bunny Kill! Kill!, Bonnie and Clyde vs Dracula and Killjoy 2, 3 and 4. Trent Haaga is the face and the voice of cool, trashy indie US movies that ordinary people have never heard of and we salute him.

But he hasn’t directed before. This film, originally released on US DVD at the tail-end of 2011 and now picked up for exclusive UK VOD distribution by the fine folks at TheHorrorShow.tv, is his directorial debut. The screenplay isn't by Trent but was written by Adam Minarovich who has previously made four films of his own. He apparently operates at the next rung down from Trent because I have at least seen some of Trent’s films and have heard of others. But Minarovich is way off the radar: Wiseguys vs Zombies, anyone? Buy Sell Kill: A Flea Market Story? Are these actual things? 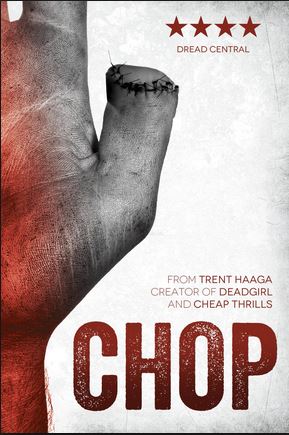 The above notwithstanding, this feels like a Trent Haaga joint. It’s gory, it’s splattery, it’s darkly comic. It’s over the top but in a restrained way. It’s this side of Citizen Toxie, that’s for sure.

Will Keenan stars as Lance Reed, an ordinary guy who gets kidnapped by a never-named stranger (Timothy Muskatell). Forced to murder his own brother for no obvious reason, Lance finds himself returned to his ordinary life with the threat of discovery hanging over him and a resentful fear that The Stranger (thus credited) will enter his life again. Which he does.

With a relentlessly psychotic determination to make Lance apologise for some unspecified wrong, The Stranger takes away first the people that Lance loves, and then Lance himself, bit by bit. Starting with a finger. Hence the title. A seemingly bottomless supply of knock-out drug syringes leaves Lance repeatedly waking up with further bits of himself missing. Eventually, The Stranger kidnaps Lance again, ties him up in a remote workshop, and sets to work on what's left.

Lance’s problem – well, apart from gradually being chopped up into bits, obviously – is that he has absolutely no idea whatsoever who The Stranger is or what he’s supposed to be apologising for. In desperation, he digs up some memories of bad things he has done but nope, those weren’t this guy. So no end to the chopping. What is even worse, this guy then tracks down the people that Lance wronged and encourages them to chop bits off him. And to be fair, Lance does turn out to be a pretty awful human being.

A picture like this stands or falls on its lead performance and Keenan (who also started out working for Uncle Lloyd – he was the male lead in Tromeo and Juliet!) is simply awesome in the role, running through a full gamut of emotions, but stepping over the screaming terror that most people would feel. At various times there’s fear and trepidation, and pleading and bargaining, but also outright defiance and belligerent abuse and deep, dark sarcasm and eventually just weariness. Muskatell (who shares several acting credits with Haaga) provides a great foil: calm, polite, respectful but clearly a sociopath. 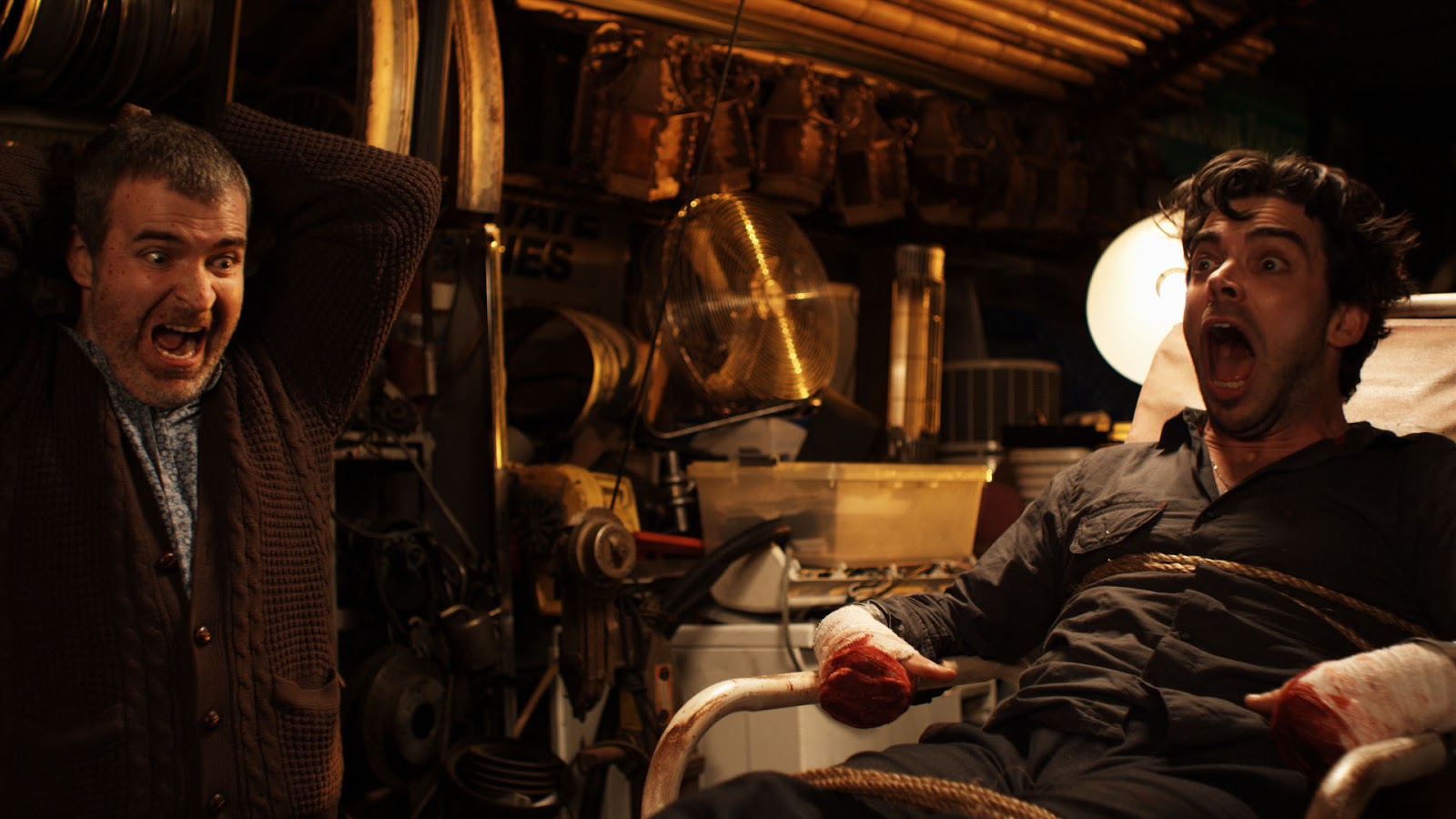 Tanishaa Mukherjee (more used to acting alongside global superstars like Amitabh Bachchan and Aishwarya Rai in blockbusters like Sarkar Raj) lends sterling support as Lance’s wife Emily, who has some secrets of her own. Writer Minarovich and Tamil T Rhee make a nice double act as the cops investigating Lance’s brother’s disappearance. The cast also includes Elina Madison (Curse of the 49er, Butchered, Creepshow 3, John Carl Buechler’s version of Jekyll and Hyde, Charlie Band’s Petrified and a number of Creep Creepersin pictures) as a hooker, producer Chad Ferrin as Lance’s brother, Camille Keaton from I Spit on Your Grave in flashbacks as Lance’s mother, and Caleb Emerson (director of Die You Zombie Bastards!) as the proprietor of a hardware store.

Chop is joyfully violent and bloody, and very, very funny. It’s nicely structured too as Lance finds himself descending into lower and lower levels of hell, stuck on a ride he’s completely unable to leave and which he has no idea how or why he is even on it. Being honest, the ending is a bit of a let down and I would have preferred something bleaker, nastier and vague – but that doesn’t spoil what is a very enjoyable horror film laced with the absolute blackest of humour. 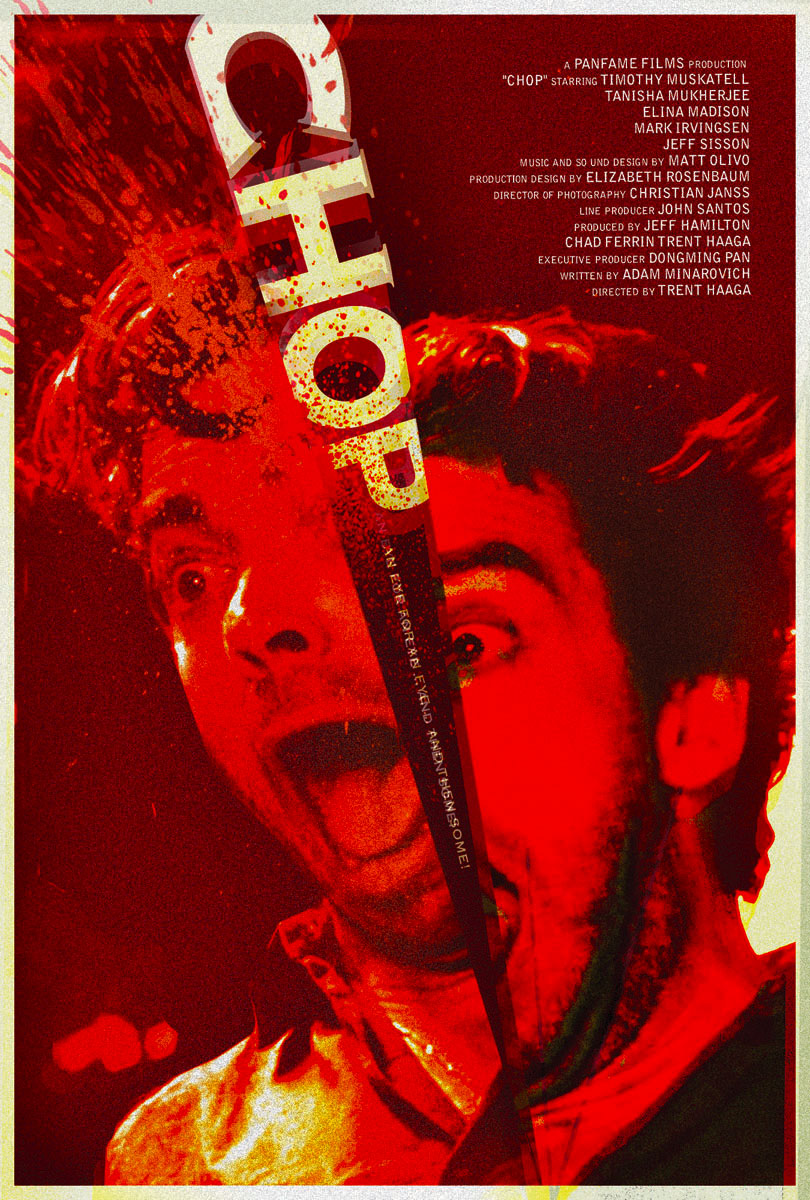 Haaga, who has spent enough time writing and acting (fifteen years or so, as explained above) to know his way around a movie production, directs with aplomb and confidence, helped by the cinematography of Christian Janss and the editing skills of Jahad Ferif. The special effects were provided by Tom Devlin who since 2002 has worked on dozens of cool movies including The Gay Bed and Breakfast of Terror, Poultrygeist, Mega Shark vs Giant Octopus, Mega Piranha, Piranhaconda, Sand Sharks, Puppet Master X: Axis Rising and – I’m not making this up – a porno called Fuckenstein. Oh Jeez, and also A Wet Dream on Elm Street. Seriously? Matt Olivo, by day sound editor on the American versions of Total Wipeout and The Apprentice, provided the score.

Chop screened over here in 2011 at Dead by Dawn but has not previously had a UK release so it’s great to see the title turning up on TheHorrorShow.tv