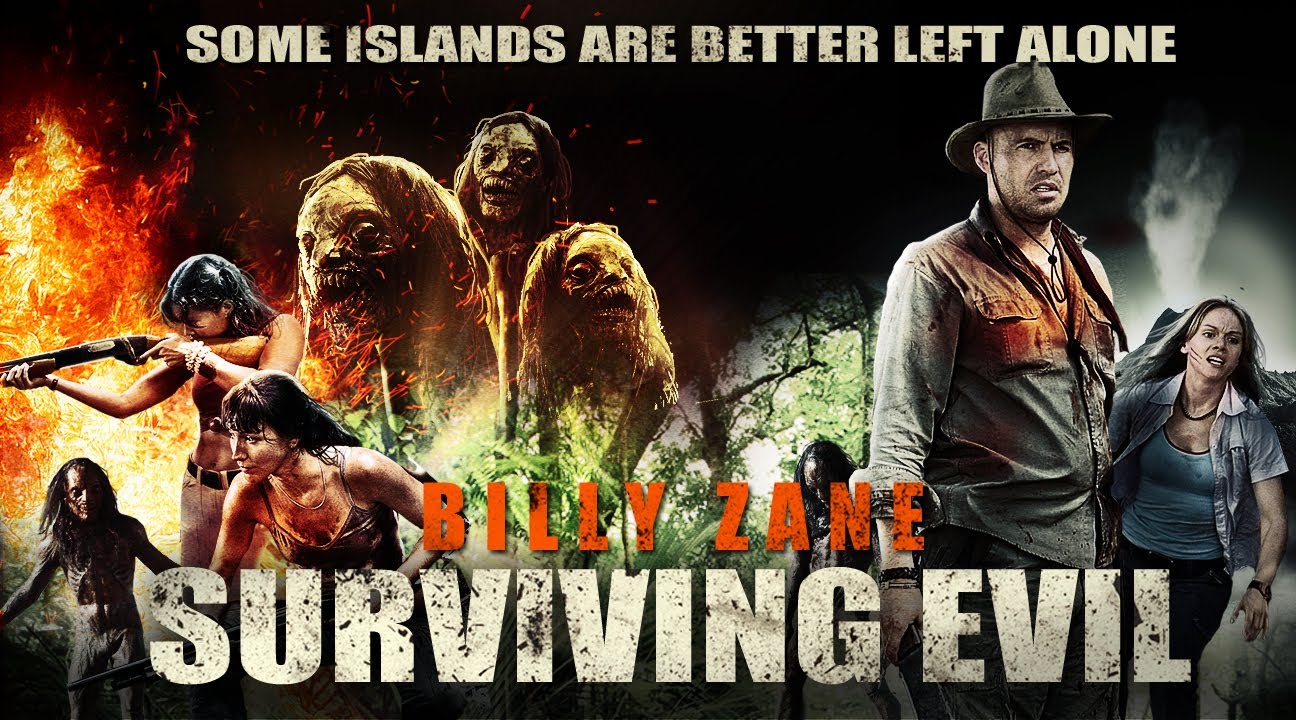 Surviving Evil may be the first horror film directed by someone who has previously helmed episodes of Heartbeat. Unfortunately, the result is what you might expect. The first hour or so, which is all lightweight character drama and soap opera relationships, is competently directed and quite interesting - but when it eventually gets round to the horror stuff it just falls apart, losing all the interest it may have built up amongst its audience.

Billy Zane (Titanic, Bloodrayne etc. - you know who Billy Zane is) stars as Seb Beazly, a professional adventurer filming the 183rd edition of his TV series Surviving the Wilderness on a remote island in the Philippines. With him are his producer/director Rachel (Louise Barnes: Borderline), cameraman Dex (Colin Moss: Cryptid) and sound recordist Phoebe (Christina Cole: bus driver Candy in Doghouse). The soap angle is that Dex and Rachel were once an item and she still carries a torch which flares up when she sees him coming on (entirely reasonably) to hot tropical babe Cecilia, one of two Filipinos in the party. (Cecilia is played by Natalie Mendoza, from The Descent, who does actually have Filipino parents.) 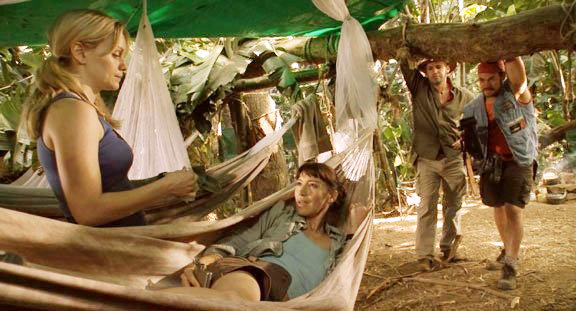 The last member of this sextette is Joey (Joel Torre, an honest to God Filipino character actor whose horror credits include Yanggaw, Sapi and Sa Ilalim ng Cogon) who doubles as guide and armed guard and is the only person to have visited this island before. Cecilia fills in as assistant guide and general PA. The boatman who takes them to the island refuses to stay but will return in six days. The group have two satellite phones which allow them intermittent contact with ‘base’.

There is one village on this island which is presumably the one we saw in a prologue being attacked by something savage while a woman gave birth during a thunderstorm. When Joey goes to make contact with the villagers he finds the place deserted, something which he keeps secret from the others although there is no indication of how he explains this lack of communication as presumably they were expecting something to come from his visit.

A few odd things happen. Phoebe thinks she sees a sad old woman standing still near the camp who has disappeared when she looks again. Playing back footage, Dex notices what appears to be a human figure climbing a tree in the background of one shot but dismisses it as it doesn’t spoil the shot. And a blackened skeletal hand falls from a tree onto Rachel while she is trying to take a dump in the woods.

All the rotting remains in this film are black and skeletal, looking like they have been burned rather than rotted away, but still with splashes of unnaturally bright red blood. These include several bodies in the village and a dead baby which lands in Phoebe’s lap. 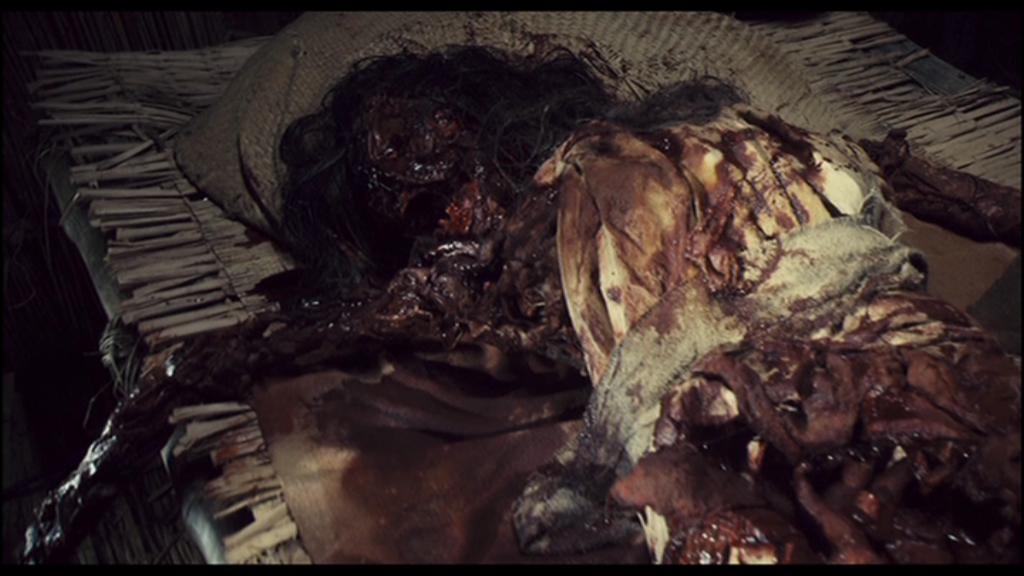 Anyway, let’s get to the meat. The big selling point of this film, at least as far as I’m concerned. Joey and Cecilia become convinced that the island is home to an aswang.

An aswang, folks! This is an honest-to-God British aswang film! Who would ever have thought such a thing possible?

Actually, it’s not really a British film except for tax purposes. It was shot entirely in Durban - in May 2008 - with some post-production in the USA and the Philippines (which, with the possible exception of some stock jungle footage, is the closest the film ever gets to Manila). But the opening titles proclaim Surviving Evil to be ‘A UK/South Africa co-production’ and so it is. Even though the only recognisable name among 13(!) executive producers is American B-movie legend Chuck Fries.

But it is at least a proper aswang film. Just about.

One of the things that distinguishes the aswang among monsters is that it preys on pregnant woman - and guess who has just missed her period after a one-off drunken fumble with Seb? That’s right, it’s Phoebe.

Meanwhile Joey has his own subplot. He needs money because his wife is gravely ill and he has returned to the island, not just for the job as guide, but because he knows the location of a derelict World War 2 outpost constructed during the Japanese occupation. And what do all stories that touch on the Japanese occupation of the Philippines revolve around? Got it in one! 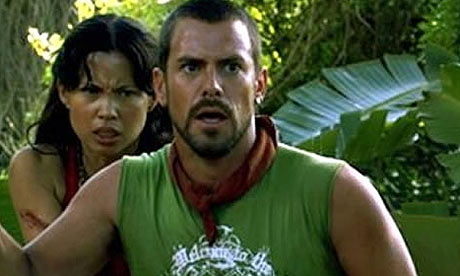 Joey seems to have no clear evidence that there is gold in the outpost but he also seems fairly sure it is there. He has a hand-drawn cloth map but there’s no indication of where he got it; he may even have drawn it himself on his last visit. But he also tells Cecilia, when she follows him to the outpost, that she can return to camp by just heading due south. So, you know, the map’s not really necessary.

It is while Joey is deep underground, in a cavernous vault beneath this jungle outpost, that we get our first clear look at the aswangs. For there are several. And it honestly is one of the most cack-handed monster reveals I’ve ever seen. A couple of them just appear and start threatening Cecilia but there’s no build-up, no follow-through, no surprise. It looks like it’s been cut together as a best-we-can-do job after a bunch of shots either weren’t filmed or got screwed up.

But we do at last get to see some aswangs - and what a disappointment. Your aswang is a sort of Filipino vampire thing, a mysterious, fantastical creature of the night, it’s super-long tongue ready to suck the life from any unborn foetus. It’s weird and terrifying. These aswangs are basically pitch-black, ferocious, animalistic men, growling and jumping around and holding their clawed hands up in a scary fashion. Grrrr! I’m an aswang! I’m sorry but they’re about as scary as the Pathetic Sharks in Viz. They’re the Pathetic Aswangs. 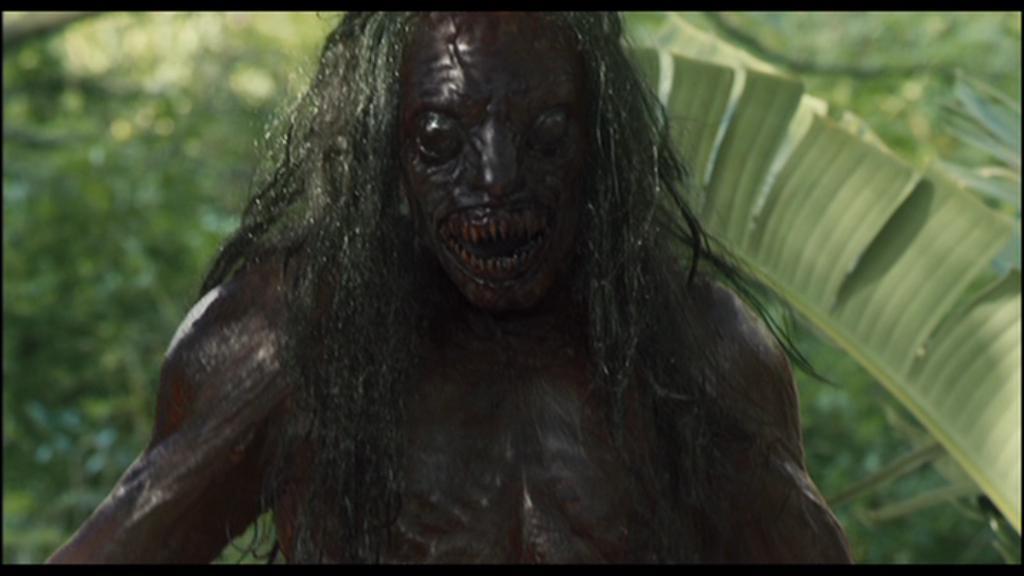 According to Joey there are three things we must all know about aswangs, apart from them being so scary and dangerous and all. One is the whole pregnant women schtick, one is that they can’t go underground(?) - which leads to Dex suggesting they dig a trench to protect themselves but by that time they’ve got no spade, Phoebe is in hysterics and Seb is incapacitated after one of the aswangs bit him on the arm when he was up a tree trying to photograph a macaque.

The other thing is... they’re shape-shifters.

Which sounds great but, as might be expected by the more cynical viewers, this whole shape-shifting thing is largely irrelevant and not really featured to any great degree. There is one short sequence on the beach when a couple of aswangs are portrayed by a pair of alsatian dogs and there is the climax when a whole bunch of them suddenly sprout bat-wings and soar off like so many flying monkeys to their tree-top eyrie. That’s pretty much your lot.

I won’t spoil the film by describing who survives or how (or why) or the rather curious epilogue which is probably meant to be unsettling and unnerving but just comes across as unclear and undecided. I’ll just observe that the movie takes a very, very long time to get going and, when it does, it falls apart. A big disappointment. 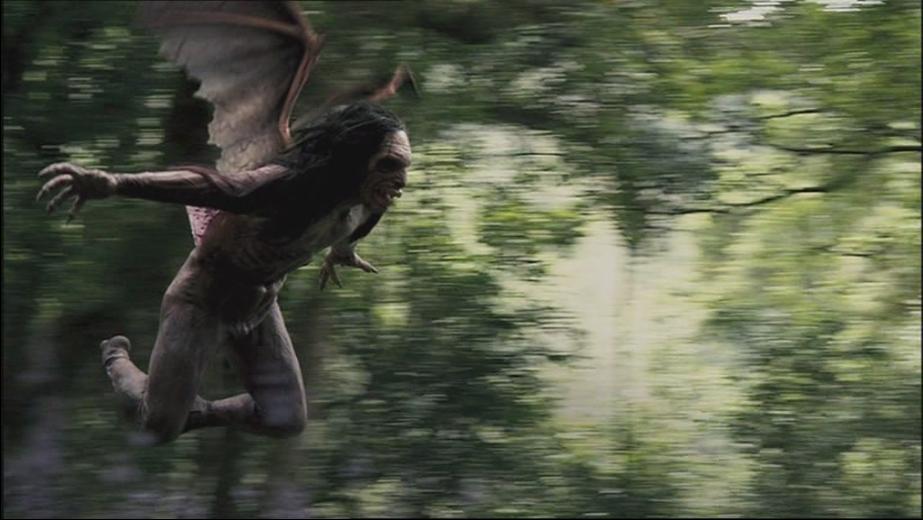 Writer-director Terence Daw has a track record on some of British TV’s blandest and dullest series: Heartbeat, Emmerdale, The Bill. To be fair, the guy’s got to earn a living and not everyone can direct Doctor Who (and until that came back, there simply wasn’t anything interesting or exciting being made in the UK). But this lack of experience in the fantastique shows itself in Surviving Evil where, as mentioned, the character stuff is fine but the action-horror stuff just doesn’t work. Daw has also directed kids shows, arts shows, documentaries and a Ravi Shankar concert film.

His self-penned biography on IMDB mentions a whole bunch of feature scripts that he has written and sold. I actually feel quite sorry for the guy because he clearly had high hopes for Surviving Evil and maybe saw it as a route out of soap opera purgatory. Maybe he can still make it.

Among the small army of executive producer are several who worked on Book of Blood and/or Chemical Wedding. DP Mike Downie is one of South Africa’s most prolific cinematographers with credits ranging from Boer War documentaries to the Johannesburg version of Pop Idol, plus loads of feature films, shorts and TV (including season one of Ed Naha’s series The Adventures of Sinbad). 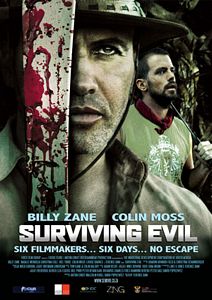 Tom Kane, who shares music credit with Colin Baldry, has a couple of interesting British horror shorts on his CV include E’gad Zombies! and a version of The Tell Tale Heart. Editor Adam Recht cut that weird 2006 BBC version of Dracula plus episodes of Bonekickers, Primeval, Hex and the Prisoner remake. Brendan Lonergan (Blood + Roses) designed the creatures.

Released theatrically in South Africa, Surviving Evil had a token UK theatrical release in one cinema in Manchester (probably a contractual requirement). It played successfully in the Philipines. But then it would, wouldn’t it.

I really, really wanted to enjoy Surviving Evil more than I did. It’s a British aswang film ferchrissake! But it didn’t grip me, it didn’t scare me and, while the characters are well-rounded and sympathetic, I wanted to come out of the cinema whistling the monsters. And I didn’t.