When I watched Colin, the extraordinary debut feature by Marc Price, I knew that I had to find out more. Marc was kind enough to answer a few questions by e-mail in October 2008. 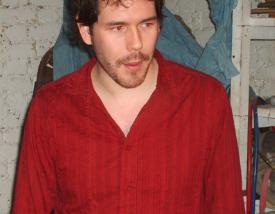 How closely does the finished version of Colin come to your original ideas/plans/hopes for the movie?
“It’s pretty much the film we set out to make. Instead of chasing a budget I decided to make the film without funding and never use money (or lack thereof) as an excuse not to have sequences like the house siege or street skirmish. I also didn’t want to make the mistake of throwing away bucket-loads of my own miniscule income so we put a lot of focus on delivering visceral action using the creativity and inventiveness of everyone involved.

“With actors like Alastair Kirton I had a lot of confidence that the characters would work. It was the end-of-the-world and action sequences that would need to be tackled in the right way.

“We never went into a scene involving special effects without knowing precisely how we were planning to shoot it. I had a pretty good idea about what we could achieve in-camera, in the edit or with sound design so there was still that sense of freedom to try things on the fly.

“One moment that didn’t work as written in the script was something planned for Colin’s first victim (played by Craig Russell). The initial idea was to position a low angle camera looking up to the roof of this tall building where we’d see Craig chased to a window ledge, fighting off a bunch of zombies. Deciding a speedy, high impact death is preferable to being eaten he jumps, lands in front of Colin but unfortunately survives the fall just long enough to experience Colin taking a bite out of his face... all in a single take!

“We got the bit where he landed to look pretty good but the rest of that stuff was never going to work unless we had an excellent CG guy (it would have been far too dangerous to have someone messing about on the brink of a tall building) so we had to let it go. I miss that we didn’t get it, but Colin’s first meal dropping in front of him still gets a wicked reaction.“ 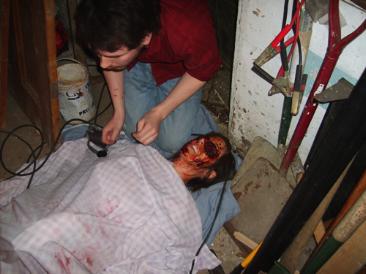 As there's virtually no dialogue, presumably you didn't have a conventional script - so what did you work from?
“The script was written as usual except this one relied a lot more on stage direction with only pockets of dialogue. It was important for at least Alastair to have a clear understanding of where the story was going so I needed a detailed structure with all nuances present for him to interpret. In retrospect, aside from Alastair I’m not entirely sure who would have wanted to read the full script!

“We certainly developed and added bits and pieces which is an amazing advantage if you’re editing the film whilst shooting it. I enjoy the process of working through a scene with the actors and I encouraged them to see the script as a reference point, not something writ in stone. For me it’s important to see an actor’s take on a scene and work from there to get to what I have in mind performance-wise. This was especially fun on the occasions where both Alastair and I had different ideas on how a scene should go. Rather than waste time arguing each other’s point it was efficient to shoot a take so Al could show me what he had in mind and he’d always trust me enough to push a performance in directions he may not have necessarily been comfortable with at first. Most of the time the end result (usually somewhere between my idea and his) was best.

“It’s good to have that variety. It helps to improve the film, when editing a scene, if you can find the one take where a line or glance is given particular focus and ultimately changes the whole dynamic of a sequence. It’s part of the fun when exploring and interpreting page to screen. That freedom comes from my insecurity as a writer, I guess.” 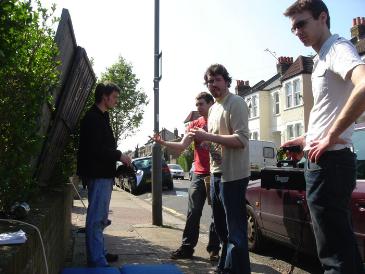 Where did you find your cast and crew and in particular how did you select your lead actor?
“The cast were either friends or friends of friends. We’ve got a good mix of professional actors and people who were just giving it a go. The idea was to put everyone at ease and not treat any one person differently to the other and what we ended up with was a very down to earth, relaxed set which brought out the best performances.

“With Alastair he was really my first choice. We’d worked together on a short film where we got along and I felt Alastair had the commitment required to make a zero budget movie about the end of the world. He’d also let me spit fake blood in his face, which I thought was pretty cool for a LAMDA trained actor!

“Alastair has a good sense of humour and an incredible amount of patience which is essential when making a film this small. I don’t think it would have been possible without a reliable friend playing Colin and I was incredibly lucky Alastair put so much faith in the project.”

How familiar were you with the zombie genre before you made this?
“I always worry that this is where I should select a few rare zombie classics to impress a few of the more hardcore zombie fans, but I can’t bring myself to do it. I hold Romero’s Dead movies closest to my heart. The majority of my zombie knowledge is from film and a few comic books.

“I’m attracted to the allegorical nature of the genre and I’m hoping there’s a lot for people to get out of Colin if they care to read into it. We looked into the sociological aspects of human behaviour and Steinbeck’s In Dubious Battle was a great model for analysing the loss of individuality once that individual is absorbed into a large group operating with a single-minded, sometimes brutal, determination.

“Obviously Bub is a big influence on Colin but we looked outside the zombie genre and more at babies or young children who have a sort of confused inquisitiveness. That seemed appropriate for the character. I also looked at King Kong (‘33, 2005 and even ‘76 which I quite like!) .I love the idea of an aggressive, dangerous character that can still hold an audience’s sympathy.

“We do reference a few of the Romero films, but that sort of thing has become a bit too commonplace in low budget zombie movies so we tried to keep it either extremely subtle or reference some of Romero’s non-zombie films. There’s a nod to The Crazies that I’m pretty happy about, I don’t know if anyone’s spotted it yet!”

The one thing that I didn't like, as per my review, was all the shaky handheld camera-work: why did you decide to use that stylistic technique?
“Early in the writing I felt the world, at its most simple, was split in two: zombie world and human world. I wanted a camera style that reflected those separate viewpoints. For the human characters the world is coming to an end. Humanity is overrun by something illogical and it’s happening so fast that we don’t have time to adapt or understand why, so I wanted handheld camera work to express that sense of panic.

“For the creatures there’s less urgency so the camera style was significantly calmer. As the story progresses I think these two viewpoints become more complex than ‘zombie bad/human good’. I wanted the camerawork to adapt with that progression to the point where it either dictates the dominant force in the sequence or reflects the most potent perspective.”

How has Colin been received by audiences and critics and what are the current plans for distribution?
“We’ve had a couple of screenings and so far it’s gone incredibly well. We were the opening film for Sci-Fi London’s Zombie All-Nighter and we picked up Special Jury Prize at the Revenant Festival in Seattle this month. We have had a small bit of interest from distributors, but nothing too exciting. I sent a large amount of screeners out so I guess they’re either still sitting on someone’s desk or have been thrown in the bin!

“The critical response has surprised me the most. It’s been much more positive than I’d expect for what is essentially another low-budget zombie movie. I think the worst crime a film can commit is to be disrespectful to its audience, to not take the subject matter seriously and to talk down to anyone who would give up time to watch the film. I genuinely want to have made a good, visceral, meaningful film that an audience can respond to in the same way as I would when watching a film like this.”

[Addendum: After this, everything went crazy when Colin was branded as 'the £45 zombie film'. So one year later, on the eve of its theatrical/DVD release, I interviewed Marc again.]
Posted by MJ Simpson at 22:09