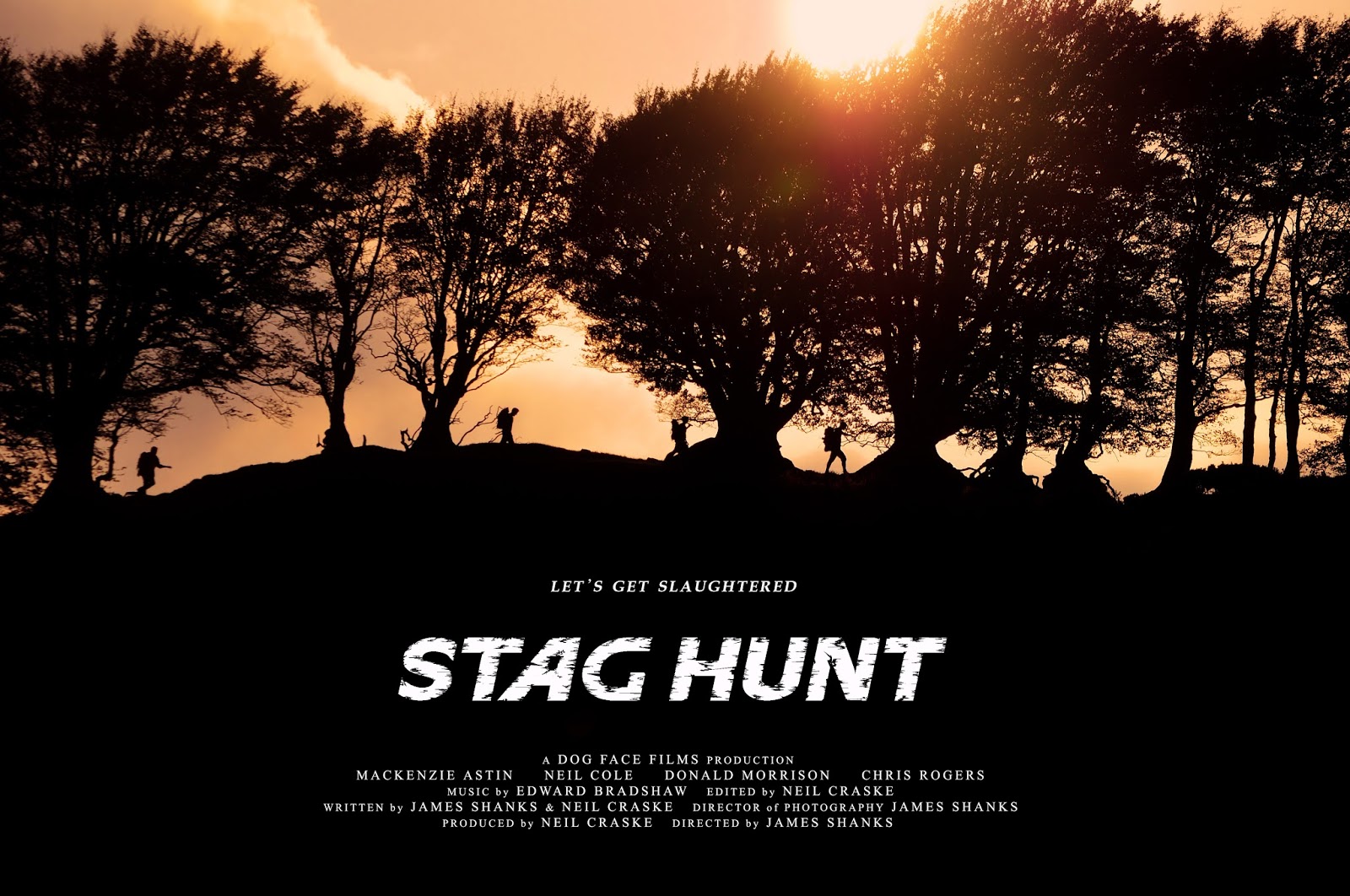 Way back in the mid-1990s I travelled, with my SFX Staff Writer hat on, down to Shepperton. Not to visit the film studios but to spend some time in a pokey recording studio above a hairdresser where I bore witness to a possibly unique event. The dubbing, in Britain, by British actors, of a Japanese kaiju movie.

Traditionally, Godzilla movies and other kaiju eiga were dubbed into English in Japan by a bunch of westerners, most of them just part-time actors who already had proper jobs but knew someone at Toho or Toei. These ‘international versions’ were trade-screened and shown at festivals, but often the US distributor would want more professional, American-sounding voices and record their own dubs. So there was often a difference between the British and American release of a film: we got the international version, they did their own.

Flash forward a considerable number of years to the first really, really good kaiju eiga for ages, the film that in many ways revitalised the genre: Shusuke Kaneko’s Gamera: Guardian of the Universe. This did great stuff at festivals – deservedly so – and Manga Video decided they would take a punt and release it into UK cinemas ahead of its video release, the first theatrical outing for a giant Japanese monster on these shores in 20 years (we never got any of the 1980s/1990s Godzilla pictures). But Manga (who mostly released anime but put out a few live action titles like Zeram) decided that they wanted a different dub, a British dub. And that was why I was in Shepperton on that sunny afternoon. 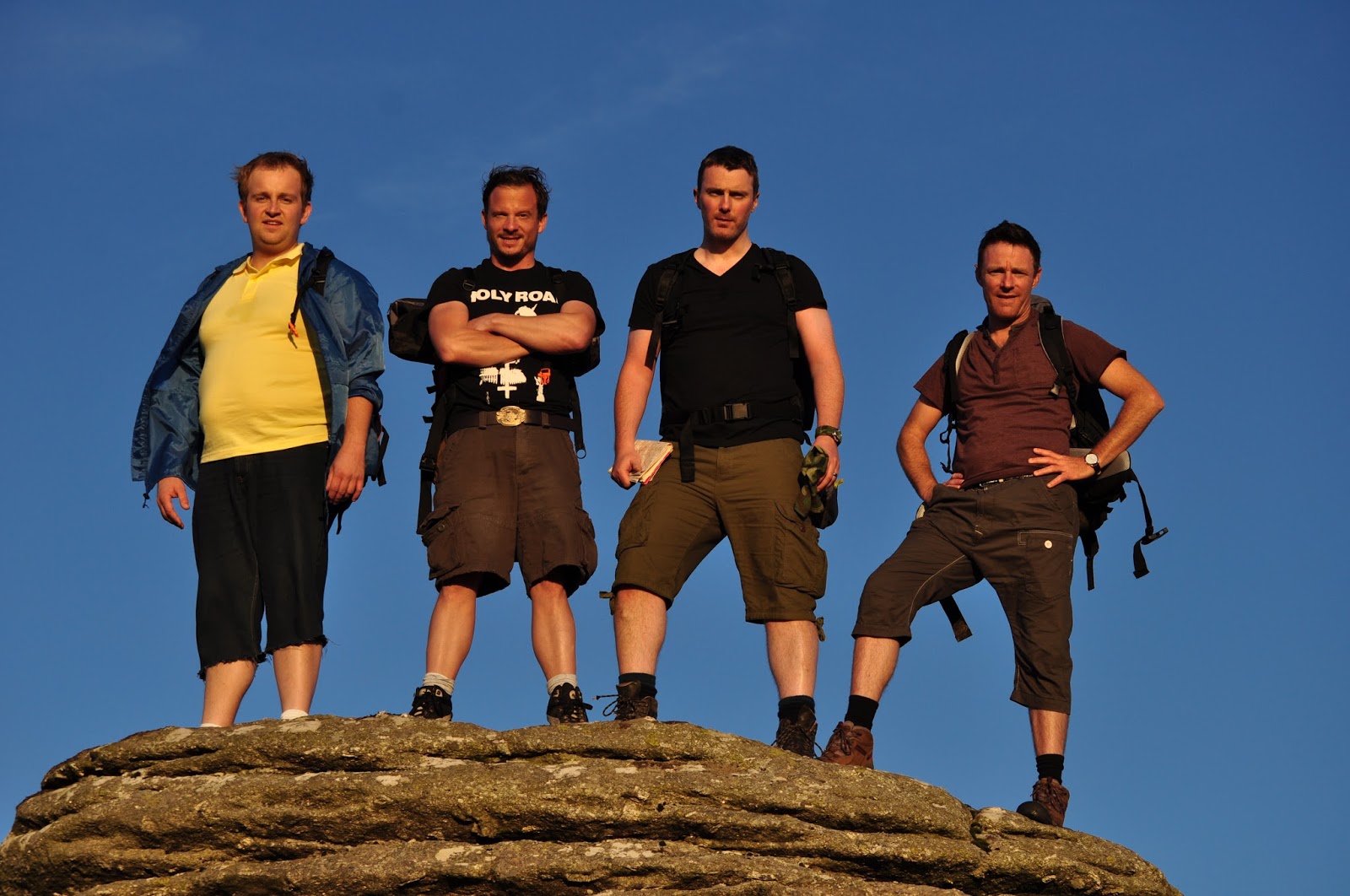 While there, I was shown some footage of an unfinished British horror film which the dubbing director was also working on. It featured Brian Blessed and Julie T Wallace and looked amazing. Remember: this was the mid-1990s. There was, like, nothing getting made in this country. At all.

For years afterwards I remembered seeing that footage. But I couldn’t remember the title, or the director’s name, and it wasn’t on the IMDB, and I had lost contact with the guy who had arranged the trip to the dubbing session. But I knew that, long before British horror was reborn in the 20th century, there had been a supernatural horror film – certainly started, possibly finished – with Brian Blessed and Julie T Wallace.

(I also knew that Gamera: Guardian of the Universe had had a UK theatrical release with a different soundtrack to the American version. Which few other people knew because the release was a flop. Manga decided to aim for the same weekend in July as The Lost World: Jurassic Park, confidant that Gamera could be the second-highest opener because every other distributor was keeping well away from that tentpole release. In the end, I’m not sure anyone actually watched the film except me and Kim Newman, and we both got in for free.) 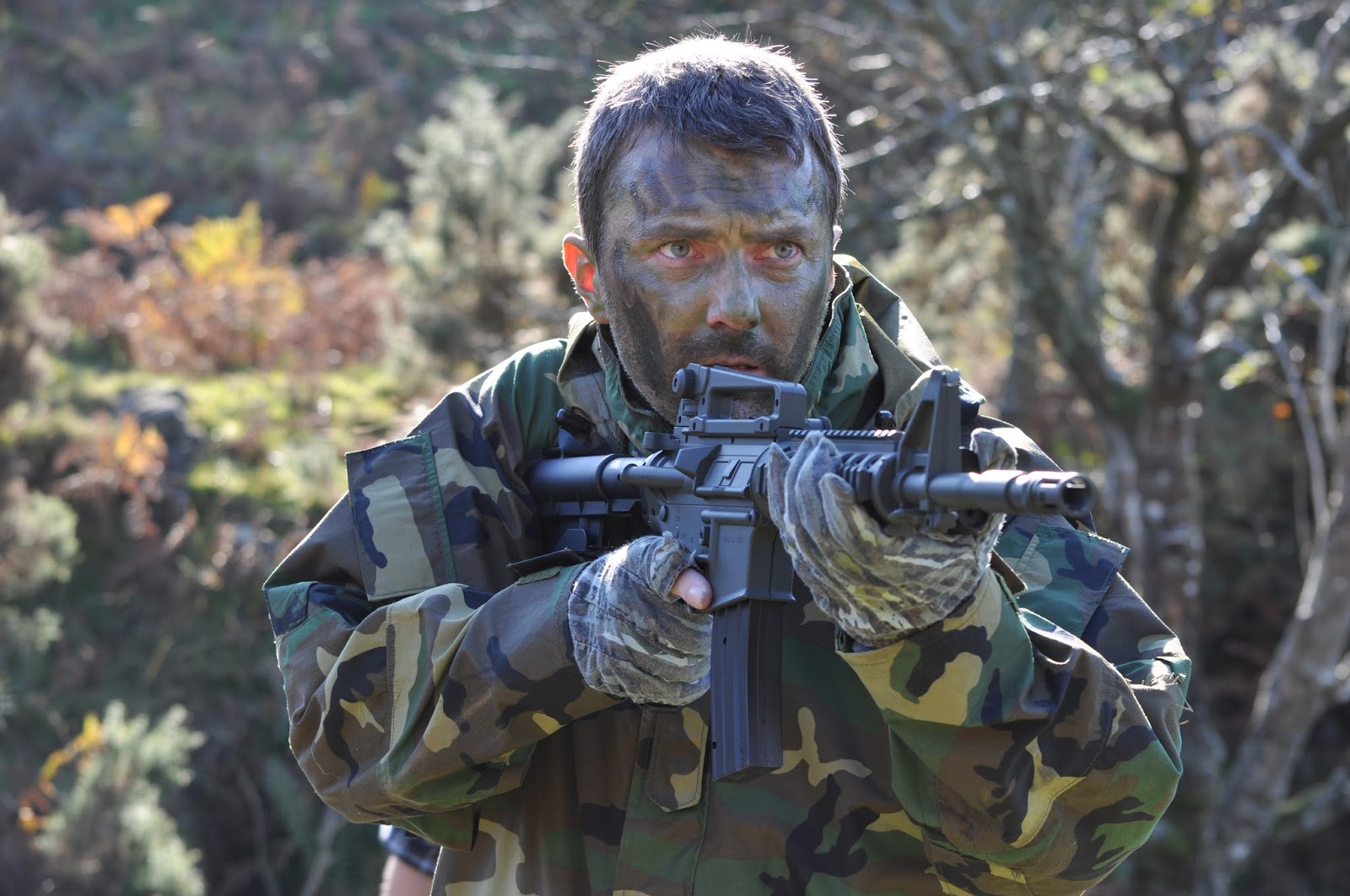 Anyway, eventually that mysterious lost British horror film surfaced - in the mid-naughties ten years after it was made - on both sides of the Atlantic. It turned out to be called The Devil’s Harvest, although the UK distributor decided that it would sell better as Don’t Go in the Attic. Truth be told, it’s not a bad little film. It has its good points and its bad points but, as I observed in one of my favourite sentences in Urban Terrors: “any film which starts with Brian Blessed shouting in Latin can’t be all bad.” In the wake of Urban Terrors I kept in touch with the director, James Shanks, and now here comes his long-awaited second feature, Stag Hunt.

And here, after that little nostalgic ramble, comes the long-awaited review.

Stag Hunt slots into the micro-genre of ‘British horror movies about stag weekends’ which also includes Simon Cathcart’s Stag Knight and Andrew Jones’ Stag Night of the Dead. It also falls into the ‘male bonding out of town’ subgenre where examples would include Doghouse, The Scar Crow and Bicycle Day. Finally, one could include this in a list of rural horrors set in Britain but away from civilisation. The set-up is this: likeable American ex-pat Spencer (Mackenzie Astin) is about to get hitched so has headed to Dartmoor for a weekend of hiking, drinking and larks with his two flatmates: immature English knobhead Pete (Neil Cole) and taciturn, practical Scot Jason (Donald Morrison). Pete is Spencer’s fiancee’s ex. Also along for the trip is her unfit, unprepared brother Andy (Chris Rogers).

Funny things, stag nights. I don’t think I had one and I’m not even sure I’ve ever been on one, although in my youth I did go on a number of hen nights which were very enjoyable (but that’s another story). I’m all for a final piss-up with one’s chums but of all the places and activities available – Brighton, Blackpool, Prague, paintball, shooting zombies with ray guns – hiking on Dartmoor seems to be a very odd choice indeed. Still, off they go.

As well as being a cracking rural horror-thriller, Stag Hunt is very funny. And its strength in this regard is that it is in no way a spoof, or wacky. The very best horror-comedy hybrids – like Shaun of the Dead or An American Werewolf in London – manage to somehow combine the two genres without lessening either. In either of those examples, you could remove the comedy and still have a very effective horror film. Or indeed you could remove the horror and have a very effective comedy. Stag Hunt manages this also. All the humour comes from believable situations and reactions and dialogue, not from artificially injected comedy ideas. 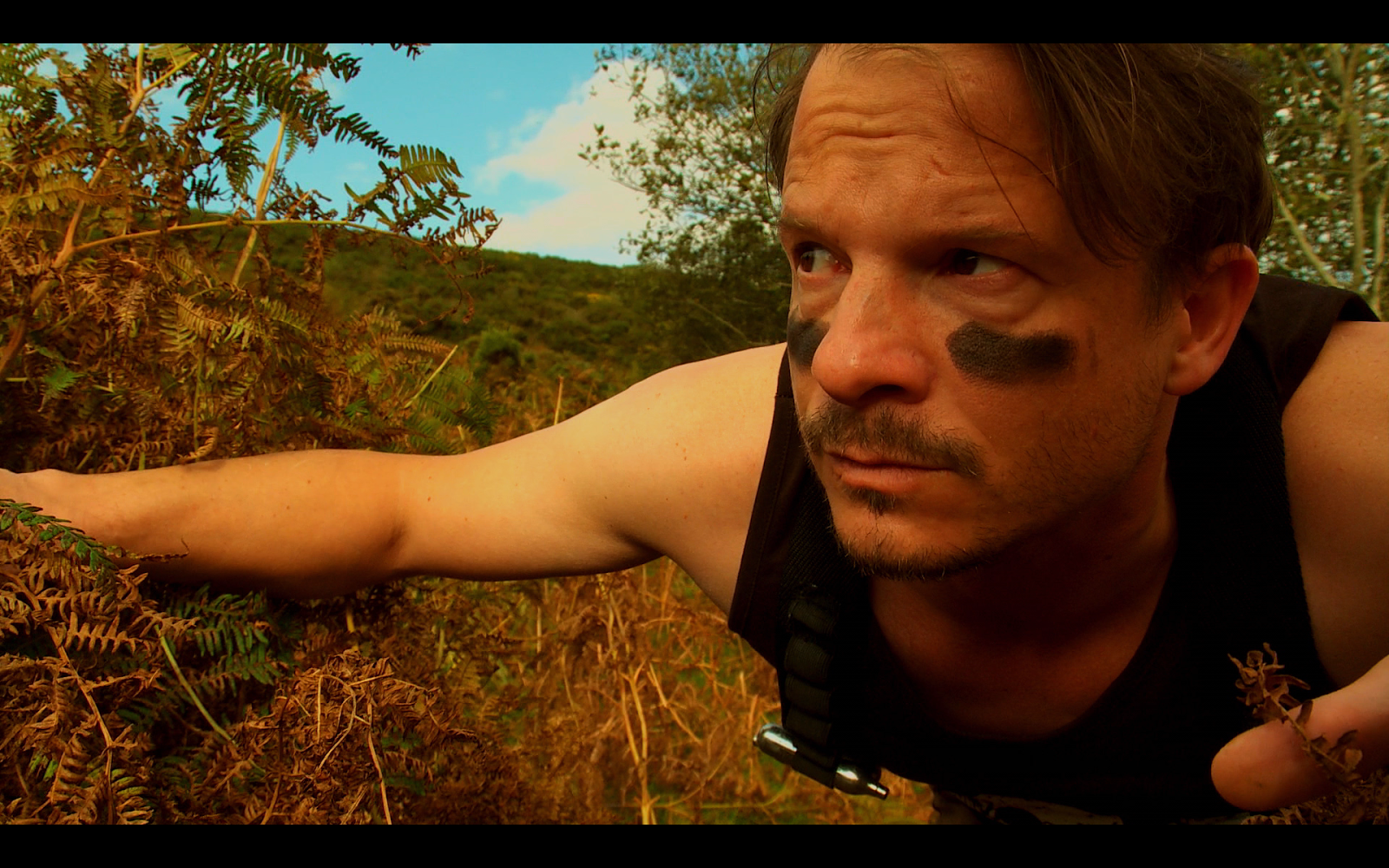 There’s a certain amount of larking about, some joshing between mates (which on occasion goes too far: there is no love lost between Pete and Andy) and some dry wit. It’s always a pleasure to watch films where the characters are at least reasonably intelligent. Yes, they like a beer and a joke and even the odd spliff. Yes, Pete isn’t nearly as funny as he thinks he is. But these are four reasonable, intelligent blokes that you would be happy to share a pint with. They actually have conversations about things – and you would be amazed how many horror films cannot tick that really simple box.

If there’s a problem here, it’s the same one that I identified when reviewing The Apostate, which is that though the film is very good it takes a long time to get going. About half an hour into this 93-minute feature comes the first clue that there might be something else out on the moors. And then it’s back to more hiking and joshing so that we’re only just short of the midpoint when the action kicks in. 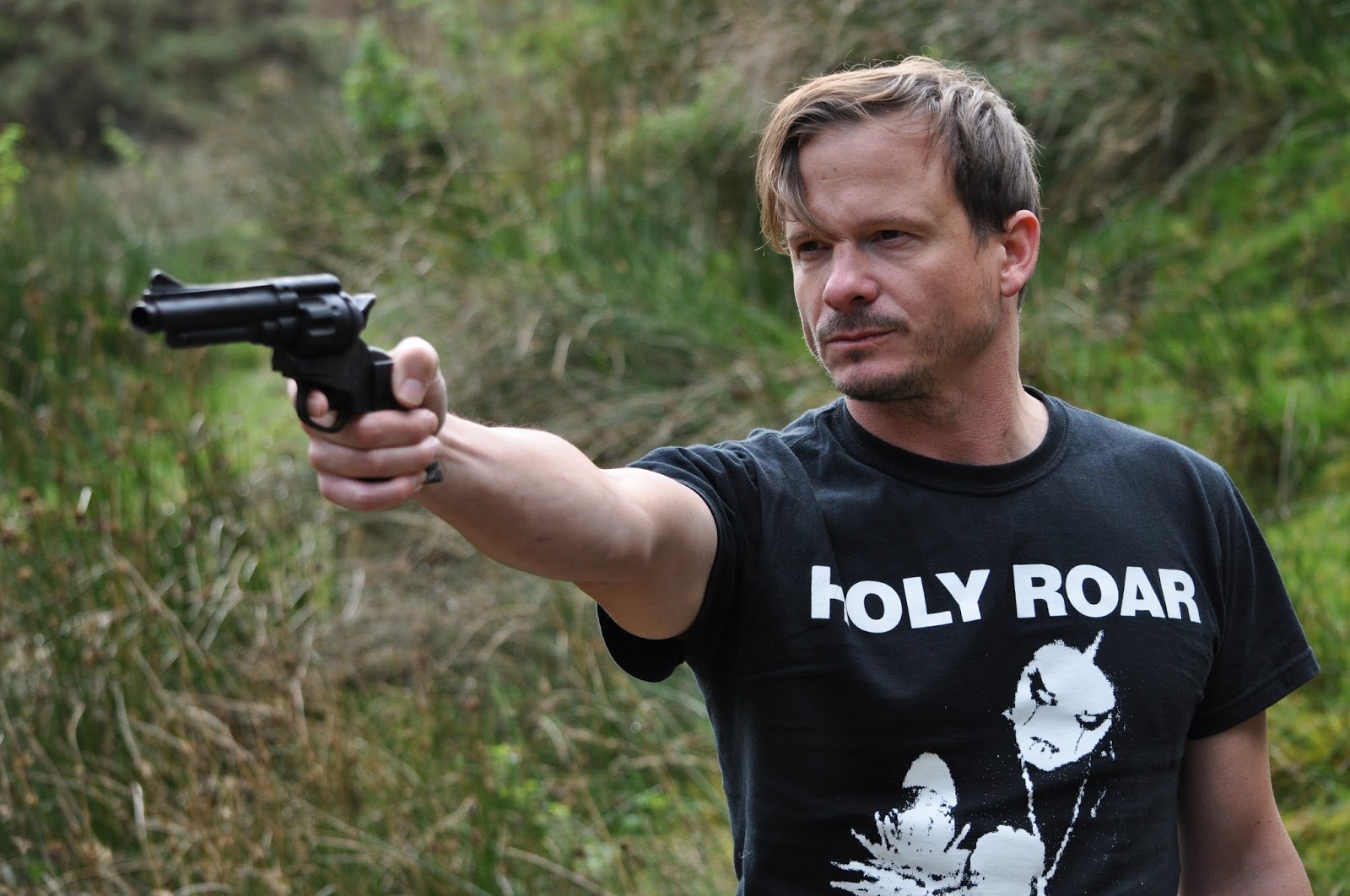 That said, when it does kick in, it kicks in with a size 14 boot and doesn’t let up. There is indeed something else out on the moors. Something large and ferocious (and, since you’re wondering, non-supernatural – it’s not a werewolf). How our four likely lads deal with this threat in their isolated situation forms the second half of the film. And though there are still some wonderful moments of humour, the threat is never presented as anything less than potentially deadly. As they struggle to avoid it, then stand up to it, then fight back, the foursome realise things about themselves. Not great revelations, just real character development. Fine writing, delivered through fine performances. Top stuff.

In a film like this, casting is key and Jim Shanks has picked a quartet of actors who exhibit real on-screen chemistry together. You can believe they’re mates, you can believe that Pete and Andy don’t get on, you can believe they’d spend a stag weekend hiking across Dartmoor (though that still seems a freaking pointless thing to do if you ask me). Aside from a few people seen briefly in a pub near the start, there are no other characters. In a lovely touch the barmaid is Julie T Wallace, reprising her character from The Devil’s Harvest.

Mackenzie Astin may not have obvious 'Token Yank' name value but that’s fine because that’s not why he was cast. What he does have is a filmography stretching back to the 1980s when he was a child actor in an I Dream of Jeannie reunion telemovie and a Facts of Life spin-off. As an adult he has been in episodes of The Outer Limits, Lost, House, My Name is Earl, Grey’s Anatomy, NCIS and Bones, not to mention the US versions of Shameless and Prime Suspect. Despite his many credits, Astin hasn’t previously appeared in a horror film, if we exclude trying-too-hard comedy short Zombeo and Juliecula. But if there’s one credit that will haunt the poor man forever, I fear. It’s a starring role in a theatrically released feature that he made in his teens. Have you ever had the misfortune to see The Garbage Pail Kids Movie? Yes, that was Mackenzie Astin as Dodger, the boy who befriends them. Wow. 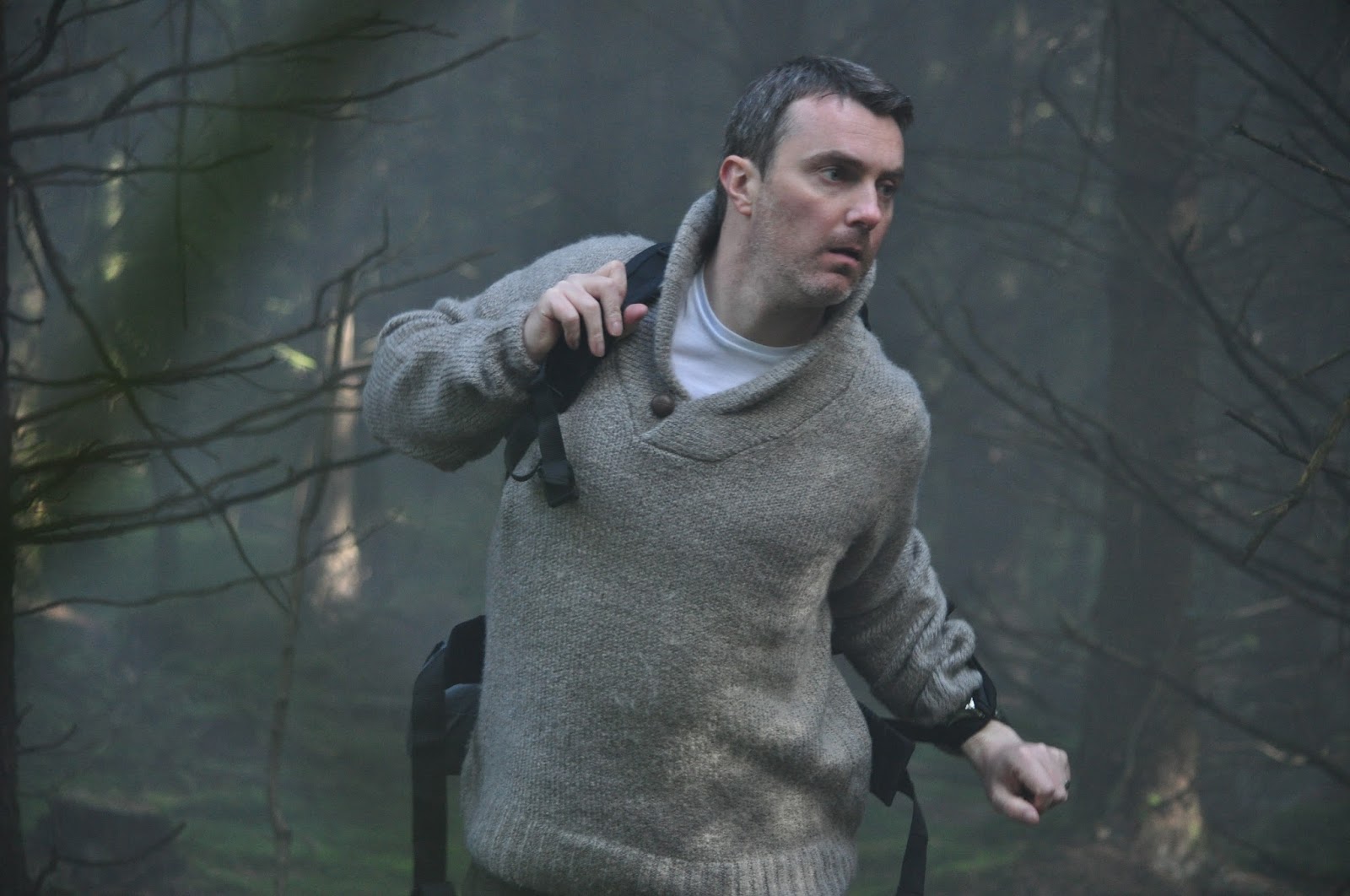 Moving on, Neil Cole’s previous horror credit was Howl, not the Paul Hyett movie but a 2013 short directed by Jamie Sims. As well as acting, he does stand-up and has a bunch of TV presenting credits including loads of motorsport commentaries. Chris Rogers has done a bit of film and TV but mostly stage including a fair amount of Shakespeare. Donald Morrison was in vampire web-series Judas Goat.

Jim co-wrote the script with his mate Neil Craske, who was co-producer (among other credits) on Devil’s Harvest and served as producer here. Jim also DPed, Neil also edited (and was sound designer). The suitably gruesome and realistic make-up effects are the work of Joe Fathers, director of classic documentary A History of Swanscombe, and their after-effects in an epilogue are courtesy of Alexandra Ellison. Visual effects are credited to Chris Harvey John of Harvey House Films. The beast itself, of which we sensibly see very, very little, was built by Animated Extras, an effects house whose previous BHR credits include Piggy, Dorian Gray, Shaun of the Dead and It’s a Wonderful Afterlife, plus lots of high profile, big budget stuff. The soundtrack is a mixture of music by Edward Bradshaw (13Hrs) and songs by Mark Underwood (who is also an actor and had a bit part in Truth or Dare). Shot over two weeks in October 2011 (the copyright date is 2013, first screeners went out early 2015), Stag Hunt came in at under £20,000 of which about a quarter went on the barely glimpsed (but vital) animal antagonist. The photography shows off Dartmoor very well, as it happens, and the sound mix is good although the ADR betrays itself in a few sequences clearly shot in very windy locations.

It’s a real delight to finally have another film from James Shanks. Stag Hunt is a finely judged character comedy which morphs skilfully into a tense horror-thriller without ever losing its comic touch. Good work all round.