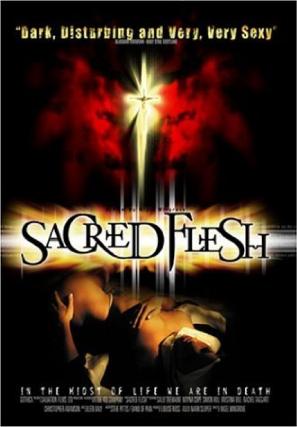 Once upon a time, Salvation/Redemption was the most important British label for horror videos. They released a mixture of Euro-sleaze (such as Lips of Blood), British horror (such as Virgin Witch) and old classics (such as The Vampire Bat). All the tapes came packaged in those black and white stylish covers, most of which had photos of Eileen Daly looking suitably gothic. You could spot a Redemption video at a hundred yards and the company had a reputation for caring about their product. Redemption developed a whole franchise around itself, even to the extent of having its own magazine, The Redeemer, about all things vampish and gothic.

And then Redemption sort of faded away. They repackaged old product at lower prices but there didn’t seem to be much new stuff emerging and the excitement of a new Redemption video became rarer. I don’t profess to know the business side of things but the impression given was that there were commercial as well as artistic factors involved. The UK cult video market has changed dramatically in recent years, with the advent of DVDs, a slew of new specialist labels, greater international availability and the emergence of the web requiring complete reinvention of sales and marketing techniques.

I’m not saying Redemption ever really went away, but they were quiet for a while. Well now here’s a couple of blood-spattered new releases landing on my doormat, requiring me to ensure that TF Simpson is sound asleep before I pop them into the DVD player. One disc is the first uncut UK release of Night of the Bloody Apes. The other is Sacred Flesh which is, I believe, Redemption’s only foray (so far) into actual film-making. 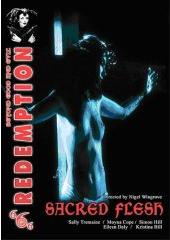 Let me be clear. If you’re Redemption’s ideal target customer - a corset-wearing goth with a library of vampire novels, a bathroom cabinet full of eye-liner and hairspray, an eye-watering collection of tattoos and piercings, a subscription to Skin Two magazine and far too many Gene Loves Jezebel albums (ie. one) - then you’ll love this. As for the rest of us...

The film revolves around a nunnery where the Mother Superior is having visions which cause her to describe the other nuns indulging in sexual shenanigans. The Abbess (Moyna Cope) calls in a local Abbot (Simon Hill) whose scarlet cassock and wide-brimmed hat is probably ecclesiastically and historically accurate but unfortunately can only make one think of Monty Python’s Cardinal Fang. With his servant Richard (Moses Rockman), a straight-talking, lusty peasant lad, the Abbot sets off from wherever he is (an abbey, I suppose) towards the nunnery.

I couldn’t help noticing that the Abbot tells Richard to pack his bags as they will set out first thing tomorrow but in the scenes of them travelling - one on horseback, one on foot - the only luggage is Richard’s tiny satchel which is far too small to contain the cooking pot that they use when they stop for a meal. (A peasant girl spies on them and then steals some of their food although this has no bearing on, or connection with, anything else and seems to have been added just to pad the running time.) 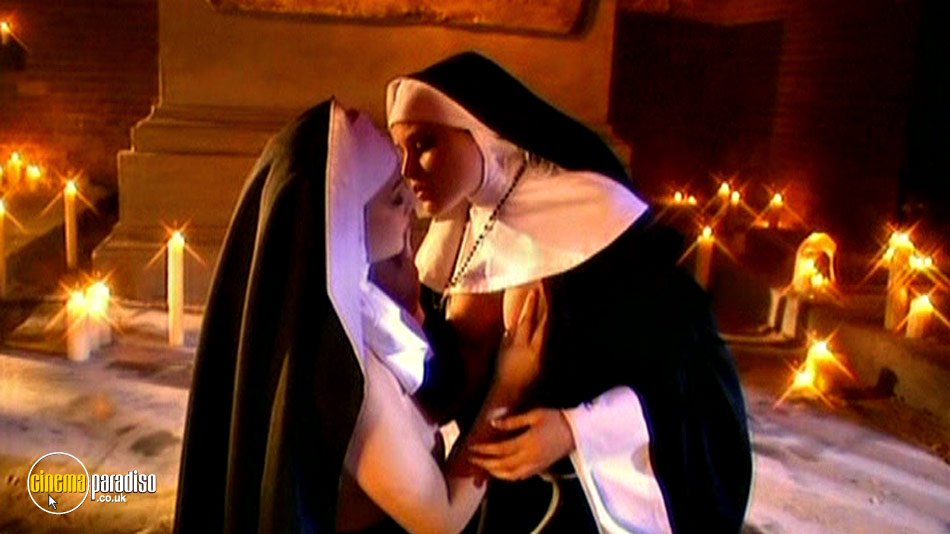 When they reach the nunnery, the film breaks up into a number of strands. One is simply the Abbess and the Abbot walking through the gardens, discussing the matter in hand and its bearing on Christian teachings. An adjunct to this is Richard chatting up Marion (Louise Linehan) a local girl who works at the nunnery. This sub-subplot is presumably supposed to show their healthy sexuality in contrast to the repressed lust of the nuns, which it does to some extent - but then Richard and Marion just disappear from the film.

The Mother Superior (Sally Tremaine) appears in three strands of the ‘plot’. On her own in her cell she talks to herself about what she believes the other nuns are doing. In another strand, in some sort of limbo, she debates religion and sex with Mary Magdalene (Kristina Bill: The Affair of the Necklace) who has a red-painted ‘succubus’ sitting beside her throne. This was evidently shot green-screen and the background is a constantly moving montage of medieval writing. Thirdly, the Mother Superior faces a skeletal nun (Rachel Taggart, who had a small role in Cronenberg’s Spider) who is credited as ‘Catechism’ and whose electronically treated voice is quite difficult to make out. Dear old Eileen Daly is also in these scenes as ‘Repression’. Clad in an extraordinary green rubber cape and an even weirder green rubber wig, she scampers around behind the skeleton, impishly spouting odd phrases and little poems. 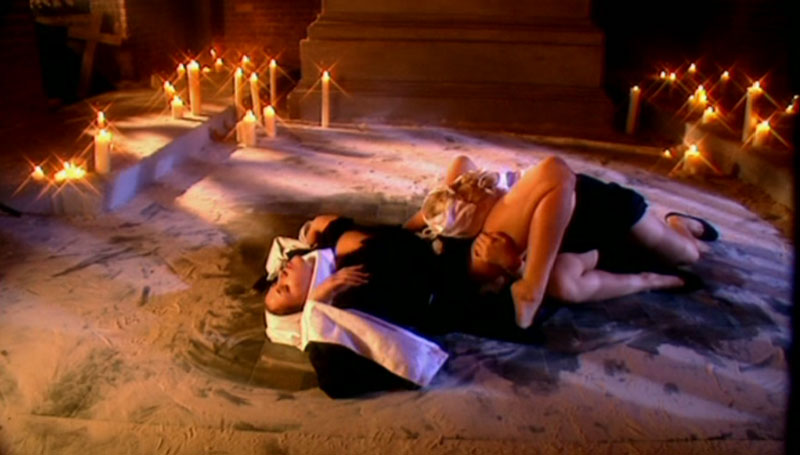 I’m tempted to say, ”Christ alone knows what’s going on” - but He surely doesn’t watch stuff like this.

The final part of the film is the bit with the naughty young nuns getting up to all sorts of malarkey because they are so sexually repressed, do you see? There are four sex scenes, the first one being a full 25 minutes into this 73-minute film. First a single nun rubs one out, then two nuns go at each other. Then a nun is groped by two randy priests and finally there’s an odd three-(or possibly four-) way. A lesbian trio take revenge on a nun who reported one of them, ‘ambushing’ her and tying her to a wooden cross. The scene cuts between the three nuns having their way with each other and one of them having her way with the nun on the cross. Both these intercut sequences seem to follow on from the same scene but they can’t both be happening because that would require five nuns - and there’s only four. My head hurts.

All the nuns, by the way, look identical, with or without their clothes on. Fortunately none of them appear to have any piercings, tattoos or obviously fake breasts.

Eventually the film just ends. Oh, there’s some final weirdness about a lesbian nun groping a female Christ or something but that’s not really explained. 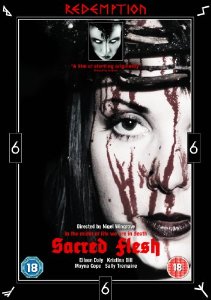 But to get to this good stuff you have to sit through all that pontification by the Abbot and Abbess which just ladles up boring, sixth-form discussion of moral issues and Christian dogma. It’s like listening to two people reading out their essays. This film doesn’t just have infodumps, it has infodumps that are clearly labelled with big stickers that say ‘infodump’ and are easily found by following all the signs that say ‘infodump this way’. Dear God it’s boring.

I can’t see what this film is trying to do. Well, I can see the basics: it’s trying to criticise religious repression of sexuality and be as blasphemous as possible (although thankfully not quite as childishly as crap like Hellraiser III). But who wants to watch something like this, apart from British horror completists and those Salvation/Redemption fans so in thrall to the company/franchise that they spend their hard-earned money on postcards of ‘Satanic sluts’?

This is not well-written enough to be intellectually stimulating (in fact, let’s be honest, the script is lousy) but neither is it trashy enough to be entertaining. Granted, it’s arousing on a basic level: what sort of heterosexual man isn’t going to feel stirrings in the Y-fronts while watching two young women sixty-nining on a stone floor, clad only in stockings and wimples? But is it enjoyable? Not really. 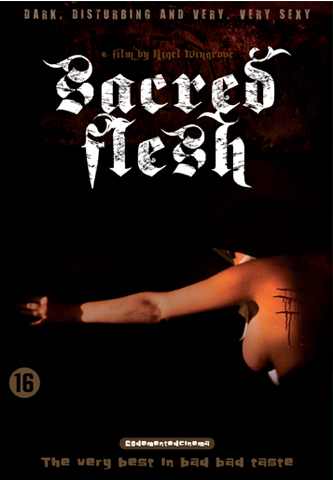 Christopher Adamson (The Last Horror Movie, Lighthouse, Evil Aliens) plays one of the randy priests while Nucleus Films’ Marc Morris is one of two red-robed inquisitors in a scene which features in the stills gallery but not the film. Marc’s business partner Jake West gets a credit for additional editing and for editing the blood-dripping title sequence. The rather nice cinematography is shared between Chris Herd, James MacDonald and Geoff Mills. Dena Costello (Razor Blade Smile, Warrior Sisters) designed the costumes which fall to the floor with alarming regularity.

There’s a couple of dozen photos (stills and behind-the-scenes shots) in the DVD extras - although it would have been nice to see them full-frame instead of cramped in a corner of the screen - plus a selection of storyboards, two trailers, a commentary and information on assorted Redemption merchandise. The sleeve blurb has three typos; I do wish Redemption would proof-read their sleeves before sending them to the printers. Why go to the trouble of designing a classy DVD package then not check which way round the accent goes on ‘exposé’? 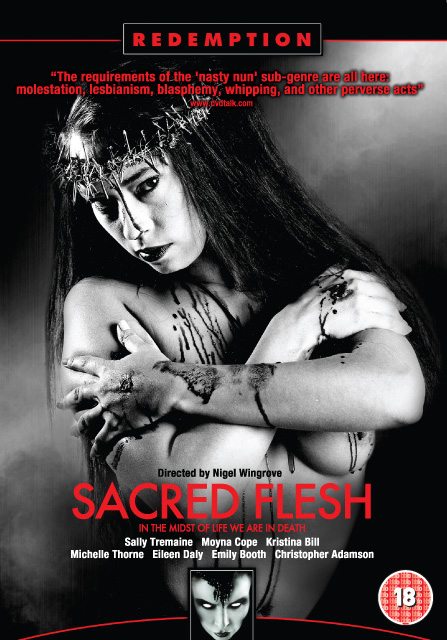 Watching Sacred Flesh is like listening to a staged debate on the nature of sexuality which is interrupted every five minutes to allow members of the audience to lick each other’s tits. It’s just thoroughly unsatisfying. Either give me a drama (preferably one with a much, much better script and less wooden acting) about psychosexual turmoil among medieval nuns - or give me 73 minutes of sexy lesbians. I don’t mind which.