Attack of the Giant Leeches

At not much over an hour, this is a decidedly creaky entry into the something-nasty-in-the-swamp subgenre of horror. Given that this lumps it in with the likes of Death Curse of Tartu and Boggy Creek II, this is not a good thing.

Surely this is a Roger Corman picture.

Actually, not quite. It was produced by Gene Corman, Roger's brother, with the better known Corman as executive producer. It is actually rather muted, lacking the sheer schlock of RC's own work, like something which wants to be a Roger Corman movie but daren't.

In a prologue (before a title sequence that seems to be a series of bits of cardboard with Letraset text on them) we see hillbilly Lem (George Cisar: Billy the Kid vs Dracula) blasting away at some weird aquatic beast before taking a slug of moonshine. We can't see what it is, but it looks like it's made of bubble-wrap. 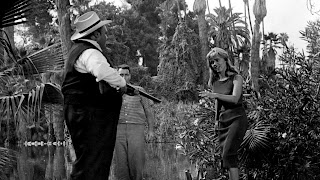 Lem and his hillbilly friends hang out at the store of fat slob Dave (Bruno VeSota: The Undead, A Bucket of Blood, The Wasp Woman) who is somehow married to the impossibly sexy Liz (the impossibly sexy Yvette Vickers: Reform School Girl, Attack of the 50 Foot Woman). No-one believes Lem's story, but he later turns up dead and covered in blood, discovered by wildlife ranger Steve Benton (Ken Clark, who ripped off James Bond in two Italian 1965 cheapies as 'Dick Malloy, Agent 077' and then ripped himself off the following year as 'Vic Malloy'!) and his fiancee Nan Greyson (Jan Shepard, also in two Elvis pictures) whose father (Tyler McVey, who allegedly had uncredited bit-parts in both The Day the Earth Stood Still and Francis Joins the WACs) is a scientist of some sort.

Later, Dave discovers his wife making out with local lothario Cal (Michael Emmet: Night of the Blood Beast) and forces both at gunpoint through the undergrowth, down to the water's edge and into the water. It's not clear what he intends to do with them, but what actually happens is that two of the weird bubble-wrap monsters appear and attack them, to Dave's horror.

The sceptical local sheriff (Gene Roth: Earth vs the Spider) organises a search for the bodies but finds nothing, disbelieves Dave's story and arrests him for double murder. The fat slob is discovered hanged in his cell the next morning which apparently proves his innocence although all it really does is make one wonder what sort of rope would be strong enough to hang a guy of Bruno VeSota's weight.

A couple of guys, using what appears to be the production's only boat, go poking gator holes to try and find the bodies and claim a reward. They find nothing, not even any gators, which strikes them as odd, but not as odd as the two monsters which suddenly appear and pull them off the boat.

A word on these so-called 'giant leeches': they're basically humanoid, with remora-like suckers on their faces, though we never get a really good look at them. Concealing your monster is usually a good idea, showing just enough for us to see the horror. Unfortunately, in this case we see just enough for us to realise that these are really, really crappy costumes. Interestingly, there is no mention of leeches until 49 minutes into this 62-minute feature

There are now four missing bodies. Steve believes that there is some sort of unknown animal in the lake/swamp which has scared off all the alligators. His prospective father-in-law wants to flush it out with dynamite but Steve says that will damage the remaining wildlife. Nevertheless, Doc Greyson drops some sticks into the lake (with a fuse which apparently burns underwater) and the resultant poorly-done explosion brings three male bodies to the surface.

We saw earlier that all four missing people were alive, albeit injured, in an underwater cave with an air pocket (this scene is depicted on the artwork used for the DVD - with a completely gratuitous fifth, bikini-clad female body added for good measure). An autopsy shows that the men died only hours before their bodies were recovered, thought they had all been missing for at least two days, indicating that they were still alive until recently. In fact, it looks like the shock from Doc Greyson's dynamite threw them from a rock shelf in the cave into the water where they drowned, but that aspect of the story is rather glossed over.

This raises the prospect that Liz may still be alive so Steve goes scuba-diving, helped by Sheriff's Deputy Mike. In a desperately unexciting climax, Liz is rescued and one of the leech-men is killed, but we see the other swimming off in the final shot.

Attack of the Giant Leeches (aka The Giant Leeches) is a real quickie, primarily notable for the lousy monster costumes, the completely unexplained monsters and some astoundingly bad day-for-night filming. Steve ponders at one point that possibly they haven't tracked down the monster because it only comes out at night, even though the two attacks we have seen both took place in broad daylight. There is even a torch-wielding mob at one point whose flaming brands help to illuminate a bright, sunny Louisiana afternoon. 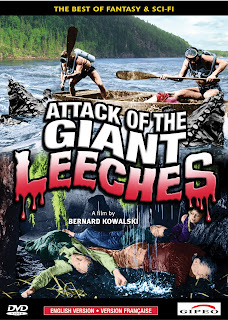 Director Kowalski had already shot three films for Gene Corman: Hot Car Girl, Blood and Steel and Night of the Blood Beast. He worked mostly on TV where a forty-year career took him from Gunsmoke to Baywatch Nights via Rawhide, The Virginian, Magnum PI, Mission: Impossible, Airwolf and Blue Thunder, Knight Rider and CHiPs. He returned to monster movies once in 1973 for the ridiculous snake-man picture Sssssss. Cinematographer John Nikolaus also lit The Terror and episodes of The Outer Limits, while art director Daniel Haller worked on most of the Corman Poe films and several 'beach party' pictures before moving into directing with The Dunwich Horror, Die Monster Die and tons of TV episodes (including - oh Lord - Galactica 1980). Writer Leo Gordon also penned The Wasp Woman, Tower of London and one or two other notable pictures but mostly worked as an actor, his extraordinary CV taking in The Winds of War, Corman's The Intruder and a regular role on Circus Boy.

The version of Attack... on this Classic Entertainment triple bill is pretty good image-wise, a little soft but only scratched in one or two places. However, the sound is pretty muddy which, coupled with the thick Southern accents, makes some of the dialogue hard to hear. Fortunately it's rubbish dialogue anyway and there isn't that much of it.