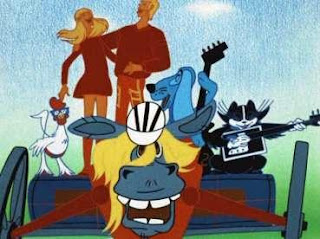 One of the advantages of having an Estonian sister-in-law is the chance to occasionally watch movies which I would be otherwise unlikely to view, and one such is this perennially popular Russian cartoon.

The story of 'The Bremen Town Musicians' comes from the tales of the Brothers Grimm (it was first published in English in 1884). Although this particular tales enjoys widespread popularity in Europe it is largely unknown in the UK. All that the cartoon keeps from the story is the basic set-up - a donkey, a dog, a cat and a cockerel who together form a musical troupe - plus the idea of a bunch of dim bandits.

The animals (who don't have names, as far as I can tell) are travelling along with their human friend, identified as 'the Troubadour', in a cart pulled by the donkey. They arrive at a city (Bremen?) where they perform for the populace and the Troubadour falls in love with the King's daughter. But he is only a lowly strolling player and the King, who for some reason spends a lot of his time eating hard-boiled eggs, prohibits the marriage. The Troubadour and his four musical animal friends leave the city somewhat dejected.

Out in the countryside, in a little hut, sit three rather useless-looking bandits whom my sister-in-law tells me are actually caricatures of a popular 1960s Russian comedy trio, a sort of Larryvich, Curlyvich and Mo-ski. With them is a statuesque lady who may be the leader of the gang or may just be 'entertaining' them. The animals work together to scare off the bandits - this much comes from Grimm - and then hatch a clever plot as the King approaches in his carriage. They all done bandit-style masks - disguises so surprising in their unlikely effectiveness as to put one in mind of Feathers McGraw with a rubber glove on his head ("Good grief. It's you.") - and ambush the King's party, tying the hapless monarch to a tree.

The five friends then remove their masks, reappear and 'rescue' the king who is of course so grateful that he immediately sanctions a Troubadour-daughter wedding. After much joyful celebration, the animals depart the city, sad that they have lost their human friend - but the Troubadout and his new bride run after them, leap aboard the cart and off they all go.

It says something for the film that I was able to follow what was happening, despite not speaking a word of Russian. There isn't a spoken word in the cartoon, with everything sung to tunes that sound like a mix of 1960s pop and traditional East European folk music. Although apparently set in some medieval milieu, the Troubadour wears flares, the King's daughter wears a mini-dress and the donkey wears a baseball cap! The animation is simplistic with extensive use of repeated movement but there is an undeniable charm to the production.

All the music is credited to Gennadi Gladkov with lyrics by Yuri Entin (who also wrote a 1979 TV version of The Adventures of Baron Munchausen). The actual credited scriptwriter is Vasili Livanov who is also an actor and starred as Sherlock Holmes in a series of Russian TV-movies in the early 1980s. Oleg Anofriyev, who provides most of the voices, was most recently seen in the 1996 US comedy Back in the USSR which was filmed in Russia with an eclectic cast that included Brian Blessed, Andrew (Wishmaster) Divoff and Roman Polanski!

Some sources list Bremenskie Muzikanty as a feature but in fact it runs only about 20-25 minutes. The Inaccurate Movie Database cites a running time of 64 minutes but that is probably the complete length of this VHS, which also includes the 1973 sequel Po Sledam Bremenskih Muzykantov and another tales from the Brothers Grimm, 'Puss in Boots', as Kot v Sapogah.

'The Musicians of Bremen' has been adapted numerous times for the screen, mostly in animated form for obvious reaons. The earliest version seems to be a 1922 Disney short, The Four Musicians of Bremen, followed by an Ub Iwerks cartoon from 1935 called The Brementown Musicians (this is available in a beautifully restored version on a DVD called Extreme Fairy Tales, along with two other Iwerks toons, Jiri Trnka's Karloff-narrated The Emperor's Nightingale and a version of Rapunzel made by Ray Harryhausen!). A 1959 German feature, Die Bremer Stadtmusikanten, used actors in costumes to represent the animals and the Muppets presented the tale as part of their Tales from Muppetland series in 1972. The IMDB lists a 1981 German TV version and a 1989 Spanish feature (Los 4 Musicos de Bremen) and the story was the basis of the very first episode of the 1987 Japanese TV series Grimm Meisaku Gekijo (Grimm Masterpiece Theatre). Finally the Russians had another go in 2000 with Novye Bremenskiye, a remake of this 1969 picture.