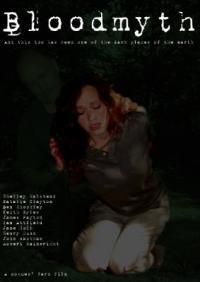 Bloodmyth is, on the one hand, remarkably impressive - and on the other hand, it’s frustratingly poor.

It’s yet another DGW movie - Don’t Go in the Woods - and at first it looks like it might be a British version of Camp Blood. Five young(-ish) people are on one of those corporate team-building things: surviving for a week in the middle of a forest. There’s Nick (Keith Eyles: The Kingdom of Shadows, Ten Dead Men), who’s a bit of an arsehole and fancies himself as a ladies’ man plus geeky Wesley (James Payton: Harry Potter and the Order of the Phoenix, Bad Day), who has brought a lot of equipment with him, and sensible John (Ian Attfield, who previously worked with director John Rackham on his short The Liberator). The ladies are blonde Kristen (Jane Gull, who was in an indie audio drama called Frankenstein X) and frizzy-haired brunette Holly (Natalie Clayton: Crossed Lines) whose big sister Juliet (Shelley Halstead) is one of the two course leaders.

The other course leader is ex-army survivalist Jim (Ben Shockley: Left for Dead, Ten Dead Men) and the course is organised by well-known survival expert Ray Morris (Henry Dunn) who has his own TV show and is presumably modelled in some way on Ray Mears. Morris drives the quintet to the camp but leaves late in the evening, promising to return after a meeting in London the next day. The first half an hour of the film is scene-setting and character building and to be honest this all goes on too long. It’s to the film’s credit that none of the cast are simple stereotypes; for example, Nick is a bit of a twat but he’s not a complete twat. They’re good, rounded, believable characters, the lot of them. But we don’t need half an hour to meet them all because none have any background, none have any secret agenda. They’re believable because they’re ordinary.

So instead we get lots of stuff about how to set up a bivouac and the right way to whittle a piece of wood without slicing open your femoral artery. There are occasional hints that someone else is in the wood with them, but fortunately any comparison with Camp Blood rapidly proves unfounded. The situation explains clearly why they are both in the middle of the woods and at a recognised camp-place. Also, the whole gang carry large backpacks pull of camping gear. And there is no legendary killer or local weirdoes warning them thereof.

In fact the film’s title is a complete misnomer. For one thing, there’s not a great deal of blood. Yes, there’s violence and some blood but only a realistic amount; it’s not a splatter movie. And there is certainly no myth. It’s a cool title but utterly meaningless. 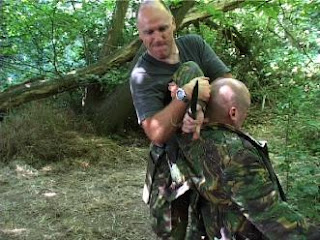 At the border between acts one and two, the first death occurs as Wesley, separated from the others, examines a ‘pagan shrine’ that he has found. From this point the film moves up a gear and really starts benefiting from a smart, well-written script. For once, characters behave like real people, making choices and decisions that real people would make. There’s character conflict here as one of the team is kidnapped and a message is delivered that the person will be killed if any of the others try to leave. Should they stay or should they (try to) go? An attempt to reach a solitary house on the other side of the woods proves both successful and fatally ineffective. There is also a perfectly valid reason why no-one has a mobile phone.

The deaths rack up, one by one, until eventually only two characters are left and they fight back against the psycho, a shaven-head bloke in camo gear (played by director John Rackham, which gives a weird sense of reality to some POV shots). This is actually slightly confusing because Jim is also a shaven-headed bloke in camo gear so the early glimpses and rear-shots of the psycho give the impression that it might be Jim. But it isn’t.

Although the individual scenes are good, often excellent, the overall plot is less satisfying. It is clear that Jim knows the psycho, presumably from their army days, in fact the impression is given that Jim is already aware that the psycho is in the woods and has had trouble with him before. When we get to the explanation bit there is something about this bloke having studied the history of human sacrifice and then killing people in an attempt to find out what committing human sacrifice feels like. I suppose that’s a motive but it doesn’t really explain his specific actions.

We clearly are supposed to grasp why this man is doing what he does (unlike, for example, the sadistic loner in Broken) but we don’t, not really. Adding to the confusion, when the credits come up, is an additional cast member: Robert Wainwright (The Demon Within, The Adventures of a Plumber in Outer Space) as ‘Bosnian cellar victim’. I wracked my brains and then remembered a prologue showing somebody killing somebody else with a machete, shot in almost complete darkness, and some unreadable newspaper cuttings. There is no indication that the victim is in a cellar, Bosnian or otherwise. Personally I would rather have dispensed with the unhelpful prologue and just had the bloke be a random loony or perhaps an old army oppo of Jim’s with a grudge and a screw loose. 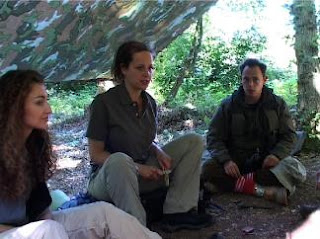 But on the whole, regarding the script, the story and the characterisations: bravo. There have been so many DGW films in recent years that the subgenre seems played out - and even the good DGW movies usually depend on at least one person doing something utterly stupid or inconsistent. Bloodmyth avoids this. It’s very refreshing. Consistently good performances from the entire cast and competent direction are also to the film’s credit.

The disappointment comes from the technical aspects of the film, which are as bad as the artistic ones are good. Now, I know that John Rackham is aware of the sound problems on this screener and those should be fixed by the time the film is commercially released. But I can see where the problem originated and it’s a real shame.

There is no sound recordist credited. The whole thing has been done using the camera mic. And you can tell this because the principal sound problem is that some of the close-ups are REALLY LOUD.

I do appreciate that the film was shot for tuppence ha’penny, but the lack of a proper sound-man really hurts it. Rackham pulled in favours to get a couple of stunt arrangers (Matt Jones and Andy Scriven from Independent Stunts; both also worked on The Silencer and Jones appears here as a dead body) and Left for Dead/Ten Dead Men director Ross Boyask lent him a hand in the edit suite. Couldn’t he have found a sound-man somewhere? You just can’t shoot a feature film on a camera mic and expect to get away with it. God gave us boom mics for a reason. 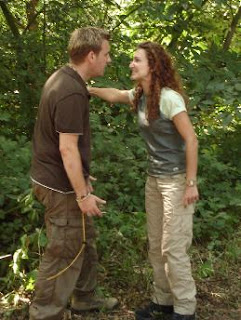 I can’t emphasise this enough. Proper sound recording should be at the absolute top of every production’s budget sheet, however tiny that budget might be. Before you pay for such inessential extravagances as actors or the food to feed them, hire yourself a bloke with a boom mic. If you can’t afford one, you need more money (or a more persuasive manner). Simple as that.

But John Rackham is fully aware of the sound problems, is fixing them even as I type this. I offer the above paragraphs as advice to other film-makers, not as criticism of John’s movie. However, remixing your sound is one problem. Fixing visuals is a whole different ball game. A lot of the shots are overlit - because this is basically a handheld camera and sunlight: no lights, no reflectors, no diffusers, none of that malarkey. There is also, on the screener, a massive problem with pixilation every time there is any fast movement. I don’t know enough about the technical whatsits to know what causes that or how fixable it is.

I’m going to assume that John Rackham can find his way round these technical glitches, not least because he has a US distribution deal with Darrin Ramage at Brain Damage/Maxim Media and Darrin wouldn’t buy a title if it wasn’t technically suitable for release. Also it must be stated - and this is a testament to the work of John and his cast - that the film is still eminently watchable even on a screener with sound and picture problems. I have sat through some films which became a chore but Bloodmyth gripped me, especially once the video-survival-manual first act was out of the way.

All credit to John Rackham for being a one-man band (he is also producer ‘Alan Morris’!). Eyles, Clayton, Shockley and someone named Rob Crook all held the camera at various points and Eyles explains in an on-line interview that he assumed the role of 1st AD pretty much by default. But the nature of a one-man band is that you simply can’t do everything yourself and if you try, it shows. Bloodmyth was shot over two and a half weeks in 2005 in almost guerilla conditions: just the cast, the director (who was also in the cast), a couple of stunt-arranging guys on some days and a friend of Rackham’s father providing the catering. 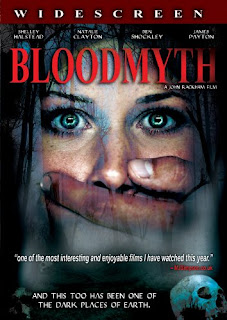 But such guerilla film-making is not reflected in the finished product except in its technical deficiencies. Say what you like about The Blair Witch Project - and I’ll say, once more, that it’s the worst film I’ve ever seen in a cinema - but at least it incorporated its cheap, guerilla aesthetic into the film so that the way it was made was integral to the story it told. Or the story it would have told if it had a story. Bloodmyth doesn’t take advantage of its cheapness and that is to its detriment. But not hugely so. Not significantly so. Not enough to stop the excellent script and sterling performances from shining through in what is certainly one of the most interesting and enjoyable films I have watched this year.

Of final note is that some, not all, of the characters have film-inspired surnames: Holly and Juliet Corman, Wesley Barker, the psycho is called Boorman and John’s surname is Carpenter(!). But as these surnames are never used on screen, this becomes just a film-maker’s affectation and doesn’t distract from the story or the characters themselves.