I interviewed Dan Schaffer, writer of Doghouse, by e-mail on 2nd August 2008, the day that principal photography on the film began. 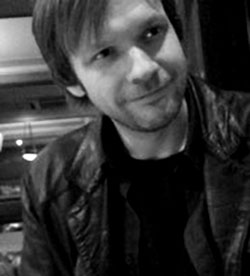 Where did the original idea for Doghouse come from and how has it changed over the course of the development process?
“Most of my horror comics are pretty off the wall or surreal, so I was looking to tell a more straightforward horror story for a change, but something with a big theme that would give it an angle and set it apart. I’ve messed around with gender politics before, but I’d always written strong female protagonists with varying degrees of feminist themes, so I had an idea to approach those themes a bit differently by switching to male leads and writing them from both sides of the gender fence at the same time. The guys in Doghouse are loveable and charming, but slightly clueless, and the women, rather than being mindless zombies, are all personifications of our heroes’ paranoia and fears of emasculation. Of course, this is all in the context of a classic zombie-style action movie with loads of blood and gore.

“The story has changed marginally during the development process, tweaks here and there to suit locations and whatever, but the core concept has always remained the same - how guys cope (or fail to cope) with social gender anxiety in the modern world. Jake West and I have worked close together to keep the film focused on that and on the right side of the line, whilst having a lot of fun with it at the same time.”

How did Jake get attached to the film and how familiar are you with his previous work?
“Jake and I are very good friends and big fans of each others work, so we’d been itching to work together for years. I wrote Doghouse for Jake so he was attached before I put pen to paper.”

What screenwriting experience have you had before this?
“I’d written two or three other screenplays before this one and sold most of them so I had a pretty good hit rate, but Doghouse kicked off very quickly and overtook everything else. It’s the first one to go into production.” 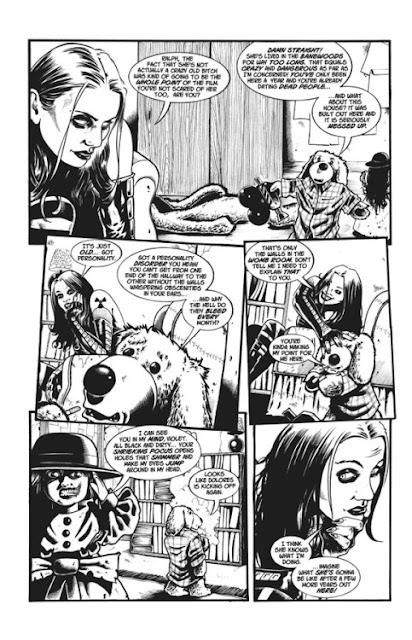 What are the similarities and differences of writing for comics and writing a film script?
“Swings and roundabouts. On one hand, comic scripts are harder because the visual language is completely unique. You have to carefully choose what you want to show in each panel to keep the information flowing in the right direction at the right speed, which can be tricky. A lot of information is carried between the panels in comics, and sometimes something as simple as a character opening a door can jam up the visual logic. On the other hand, there are no rules in comics, you can do what the hell you want, and if you want to jam up the visual logic for effect, no one's going to stop you.

“With a film script, you're still thinking visually, but you need more guts to break the rules because it's your arse on the line and a crew of a hundred-plus people relying on you not to fuck the thing up. Also, you're writing dialogue that has to be spoken instead of read, which is not even close to the same thing. But some of the action and movement sequences are easier with film. You can write a line of action and let the director worry about the camera angles and pacing.

“One of the major differences between writing for comics and writing for film is that in comics you are the writer and your word is gospel, because anything can be illustrated on the page. In film, you start out that way but as time goes on you eventually become part of a much bigger team. God complexes won't get you very far after that point. You have to be a team player, know how to listen, and learn how to give the producers what they want in your own way, without losing your own unique style or vision, because that's what they're paying you to do.”

Some people might view Doghouse as misogynist - how would you respond to that?
“I’d say look for the irony. I’ve been writing neo-feminist comics for years, so I’d say trust me and don’t make up your mind until you’ve seen it. Doghouse simultaneously celebrates and mocks lad culture. It’s about a bunch of down to earth, everyday blokes who don’t understand women but find themselves having to confront their prejudices in an extreme way. Their antagonists are all physical representations of typical subconscious male fears. So, it may well be a film about misogynists, but its certainly not a misogynist film. Doghouse is ultimately about gender politics or, to pinpoint it exactly, it's about how men fail to understand gender politics. So maybe that actually makes it a feminist film! I take the view that misogyny is not the opposite of feminism anyway, so with this film we’re playing with post-feminism and new-laddism in a way that’s playful and funny and certainly a bit cheeky, but there’s a big difference between not being PC because you don’t know any better, and not being PC on purpose to highlight a cultural condition.” 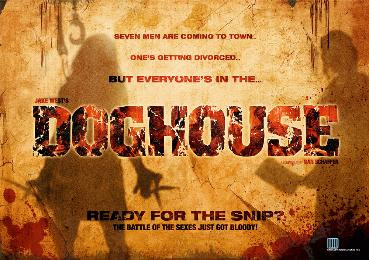 What scene or moment in the script are you most excited about seeing on the big screen?
“There are dozens of them, but I don’t want to give all the good stuff away. I’m looking forward to seeing the girls doing their thing. The make up effects are being handled by Karl Derrick’s crew and their work is truly stunning. Karl previously worked on 1408, The Brothers Grimm, Reign of Fire, and Harry Potter, so he’s very experienced and knows his stuff, and he’s pulled out all the stops on this one. The actors playing the infected women are equally fabulous. These girls are doing things I’ve never seen before in this kind of film, they’re going to be something fresh and new for the genre. I cant wait to see how the public responds to them.”