After watching Tony Gardner's amazing micro-budget werewolf feature Dense Fear Bloodline I knew I had to do two things: watch its predecessor, the 50-minute Dense Fear, and interview Tony about his films. He very kindly answered some questions in October 2015. 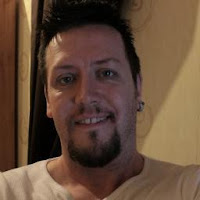 Where does your fascination with werewolves come from? What are some of your favourite werewolf movies?
"I have always had a fascination with werewolves from around the age of 11 when I was introduced to the old classic Universal horror movies such as Frankenstein Meets the Wolf Man, Dracula and The Mummy. Those movies were amazing - and certainly left me with some great child hood memories.

"When I was around 14 I watched An American Werewolf in London. To be honest, it frightened the hell out of me. It certainly wasn't how I remembered werewolves looking. John Landis and Rick Baker totally changed the look of the classic werewolf and had it running around on all fours and I loved it! To this day An American Werewolf In London has to be my favourite werewolf movie to date, followed by The Howling then Dog Soldiers. I'm a huge fan of old school FX and all these movies relied on the practical side which I think looks a lot more scary." 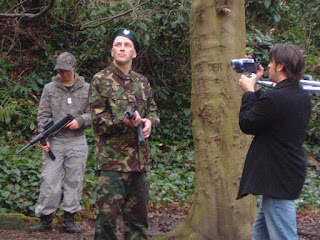 What did you learn on Dense Fear that you were able to apply to Dense Fear Bloodline?
"When I began filming Dense Fear back in the year 2000, it was really before the digital era had kicked in. There was no YouTube and no social media sites to help promote the film. I actually did not buy my first PC until around 2001 so most of my early edits of the movie were done using two old video recorders rigged with a SCART lead. It was a nightmare!

"For the sequel I wanted to pick up the pace a little and really try and step things up with the FX side of things. One important peace I think that was missing from the original Dense Fear was a good transformation scene. As a werewolf fan, this is something I always love to see and I think fellow werewolf fans would probably agree. We also got a slightly better lighting set up for Dense Fear 2. It wasn't ideal, but certainly a big step up from using a torch and a peace of cardboard to reflect the light like we did on the first movie." 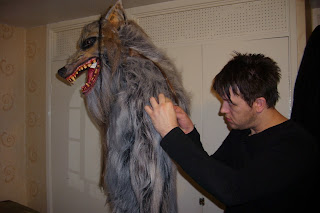 How did you make your amazing werewolf costume?
"Thank you for the compliment on the werewolf costume There was a lot of work put in to it and it did take some time to put together, I actually tried three different costume designs before I was happy with the final one used in the movie. Unfortunately I can't use a sewing machine, but I can stitch by hand and that's what I did with the costume.

"I used my own clothes as a size reference for the suit, I then bought a cheap werewolf mask online and personalised it adding my own paint job and fur on to it, with added glass eyes. My dad got to work on making the stilts for the costume which propped our actors up to seven feet tall. It did actually scare our actors on the first shoot at night in the woods, which I was secretly very happy about."

Both films took several years to make: how did you maintain your commitment and enthusiasm throughout that time?
"The first movie was a lot more straightforward to film. The only reason it took so long was the fact I had moved away from my home in Tyne and Wear down to Nottingham with my partner. The only time I could film was on holidays whilst visiting the Northeast. The second movie was a lot more challenging and it really did test me to the limits. The funding was a big issue and also actors' availability slowed things down a great deal. A mix of that and the great British weather letting us down a lot almost made me throw in the towel about halfway through filming.

"I did think to myself: 'This film is taking way to long and my actors are going to turn grey-haired by the time I wrap this thing.' But after a little time away from the project I kind of reviewed what we had filmed; it seemed such a shame to give up on this. I also didn't want to let everyone down who had given up such a lot of their time to make this and even the online fan base we had gotten who were dying to see the finished peace. So I tweaked the script so it would fit with our budget, cut a few scenes out of the movie which weren't really relevant, and we cracked on with finishing it off. It was a very hard film to make, but felt very satisfying to finish."

What is your favourite part or aspect of each film? What are you proudest of?
"I think for the first movie, just the fact of making my own werewolf film was a proud moment for me. I did go in to film-making self-taught, didn't really have a clue how films were made, I was kind of guided from my own creativity.

"For the second movie, again I think just the fact of sticking with this project for so long is probably the thing I'm most proud of. It was also nice to create something on such a low budget and still get feedback from true werewolf and horror movie fans saying that it is a good werewolf film. That certainly helps to make all the hard work feel worth the while"

What plans do you have for future productions, and for a proper release of DFB?
"I have just completed my next film which is a half hour short called Purple Hill which is due for release in February 2016 and will be heading off to film festivals. I'm also in in the early stages of casting for our vampire feature film which is due to begin filming May 2016.

"My plan for Dense Fear Bloodline is to do a re-edit of the whole movie and try and get the quality as good as possible for hopefully sometime next year. The completed movie will be available to buy on our website and will hopefully feature two discs: the feature film and also the bonus disc."