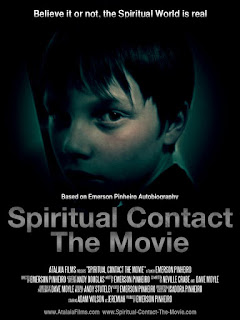 John and Helena are decent, God-fearing folk who have brought their kids up right, although Chris is showing signs of dangerous teenage rebellion fuelled by his interest in what Rev. Lovejoy would recognise as “rock and/or roll”. Jeremiah’s visions start after he uses a voodoo doll to take revenge on a neighbour who was mean to his mother, although this is never followed up. 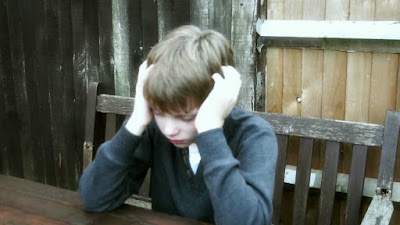 The young lad starts attending a nearby church with a schoolfriend, which strikes me as a bit odd. His parents are at first wary of letting him attend evening services that finish at 9.00pm, but later when John gives Jeremiah a lift it transpires that they don’t actually know where this church is. Anyway, the pastor (Andy Douglas) gives Jeremiah some advice, as does a friend’s grandmother (Andrea Francis). His father gives him “the best present anyone can receive” – a Bible. Concerned about their younger son’s mental condition, John and Helena send him to a psychiatrist (Luca Della Valle, who was a security guard in the Man from UNCLE film) where Jeremiah discloses that he can see the guy’s guilt over a sexual assault. But as with the voodoo doll, this is an isolated idea which doesn’t seem to relate to anything else in the film.

Towards the end of this short feature (running just 66 minutes), Jeremiah reads a couple of scripture passages out loud, and the film ends with a quote from writer-director-producer Emerson Pinheiro (who also plays the spirits in the effects shots).

Pinheiro based this on his own childhood experiences in the mid-1990s, and who am I to doubt either his religious beliefs or his genuine belief that these events happened to him? That’s not really my concern: I’m interested in how this functions as a horror film. And ‘surprisingly well’ is the answer. The spirit effects are creepy, and there’s one particularly effective dream sequence when Jeremiah is physically yanked from his bed by a cowled spirit which grabs him by the ankle, pulls him onto the floor and then threatens him with a machete. 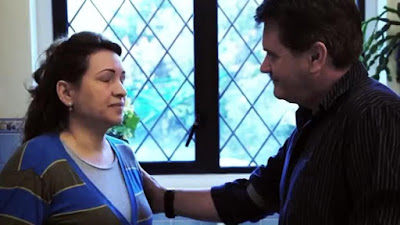 The acting varies considerably but none of it is truly awful. The photography, shared between Pinheiro and Dave Moyle (whose own shorts include The Supernatural Event, on which Pinheiro helped out), is basic but functional, and the sound is good. All the dialogue is subtitled in Brazilian Portuguese (except for one short scene where two characters speak that language and the subtitles are English) - another way in which this film is unique among the 600 or so horror films made and released in this country in the past 15 years.

Given that there’s not a huge amount of plot, the script by Pinheiro, Moyle and Neville Crabe is surprisingly coherent and well-structured. There are a few too many scenes of people just arriving or leaving places which aren’t needed, without which this would probably run dead on an hour (give or take) but that’s not an egregious problem.

Interestingly, although Adam Wilson is himself devoutly religious, he’s not a Spiritualist, he’s a Mormon – which, for the benefit of the Godless, heathen hordes among you, is a completely different thing. Lamin Tamba (The Devil Went Down to Islington) and Priscila Gomes play the neighbours; Claire Greasley (Death Walks, Rock Band vs Vampires) and Chris Cowlin (Woman in Black 2, May I Kill U?, The Seasoning House, Scar Tissue) are among the congregation. Shot in 2012, the film premiered at the Phoenix Cinema in East Finchley in January 2013 and also screened at the Portobello Film Festival in September that year. In November 2014 Pinheiro posted the entire movie onto YouTube. Since shooting this feature he has made several shorts in different genres. 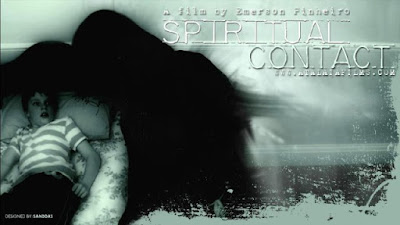 Horror fans relish something new and different, and Spiritual Contact the Movie is certainly that. It’s religious but neither preachy nor evangelical. It’s clearly been made for a religious audience, or at least approached from a religious perspective, but that’s not a problem. Followers of the Spiritual Church movement believe in the absolute existence of spirits and the paranormal. Fans of horror movies enjoy tales about spirits and the paranormal. It’s a perfect match.