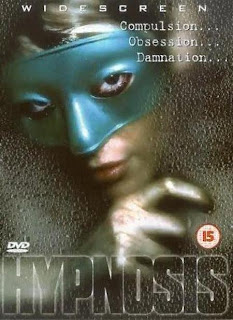 This is a real horror movie. I mean horror. Not repulsion (although if you don’t say “Eurgh! Gross!” at least half a dozen times you’re not human) and not fright. Just real terror at what can happen to people.

Veteran actor Ken Utsui stars as Police Chief Sakurai, investigating three curious suicides which all occurred on the same day. Apart from all being bizarre deaths - an old man who jumps out of a window, a bridegroom who throttles himself and an athlete who literally runs herself to death - there is one other link. All the victims were heard to mention something about “the green monkey” before they died.

Sakurai teams up with a young psychoanalyst named Toshiya Saga (Goro Inagaki) who is convinced that the victims were all influenced by post-hypnotic suggestion. A TV hypnotist looks a likely suspect.

From this intriguing premise, the plot builds, and though it drags a little during the second act which is a bit too much police procedural, the final half hour will have you gasping for breath. There are some hideous deaths, depicted via some briefly-shown (but all the more effective for it) prosthetics and the occasional CGI effect. There’s a tense scene in a concert hall, which is astounding in its audacity but pulled off with aplomb - something that wouldn’t be out of place in a Naked Gun movie is here made genuinely gripping. And the finale - I won’t spoil it by saying whether the resolution is psychological, supernatural or science fictional (in fact I’m not entirely sure myself). But it’s terrific. 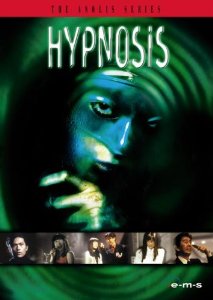 Director Ochiai (Parasite Eve) is a real artist with the camera - helped by cinematographer Osamu Fujiishi (Evil Dead Trap 2) and there are some beautifully framed shots: overhead, through doors, and a stunning play on the English word ‘terror’. A Kubrickian fondness for symmetry shows up occasionally, and in fact there’s a nod to A Clockwork Orange towards the end. Though the plot, based on a novel by Keisuke Matsuoka, is quite convoluted and confusing in places, it rattles along and never lets up.

A fantastic film, with the usual impeccable transfer from Artsmagic, though the extras aren’t up to much, with not even a trailer. Nevertheless, a mind-bogglingly good film which is wholeheartedly recommended. (The film’s US title is The Hypnotist and in Japan it's Saimin. The American Psycho-style image on the sleeve has no connection with the film.)

Email ThisBlogThis!Share to TwitterShare to FacebookShare to Pinterest
Labels: 1999, Japan