In the mid-1990s, Mike Hurst (brother of Andy) sent me a tape of Project: Assassin which I enthusiastically plugged in SFX and raved about to anyone who would listen. Since then, he has moved to the USA and built up a solid catalogue of movies including House of the Dead 2 and Room 6 and the screenplays for The Graveyard and The Butcher. I finally had the chance to meet Mike in Romania in April 2006, where he was preparing to shoot Pumpkinhead: Love Hurts back to back with Jake West’s Pumpkinhead: Ashes to Ashes.

How did you get this job?
“I saw on a horror website they were making Pumpkinhead III and IV. They were making them in England so I called my manager, asked her to get me a meeting with Brad Krevoy’s company. She got me the meeting but in the interim I found out that Jake West was doing III and IV so I went to the meeting very much as a kind of meet-and-greet. I told them: Jake is great, I met Jake years ago, he’s a lovely guy, good luck with the movies. Then I was showing my showreel to the Head of Development when Brad Krevoy himself poked his head through the door and just saw a moment from New Blood with John Hurt on screen.

“He watched about two seconds of the reel and he was like: ‘Did you direct this?’ and I said, ‘Yeah.’ He went, ‘Are you from England?’ ‘Yeah, I am.’ ‘Do you want to do Pumpkinhead IV?’ And it was that easy! I said, ‘Oh, okay...’ Then he told me that they didn’t have any script or any story and I had to come up with both in seven days for the Sci-Fi Channel. So I’ve basically written a Romeo and Juliet archetypal story.

“So that groundwork was already done by Shakespeare and I basically put Pumpkinhead into Romeo and Juliet and set it against the feud between the Hatfields and the McCoys, which apparently is a real American feud in the South. I’ve never heard of it but a lot of Americans have heard of this feud. So I sort of spliced Pumpkinhead into that story. The Romeo character gets beaten up by Juliet’s family and then calls Pumpkinhead to wipe out the entire family so that he and Juliet can be together, and that’s the motivation for it all.”

What’s the appeal of Pumpkinhead?
“Pumpkinhead’s a cool, archetypal horror character. I like the first movie a lot; I’m not such a huge fan of the second one. I actually know the director of the second one a little bit: Jeff Burr, he’s a really nice guy and I think he’s a good director. I just don’t think that’s a good film.” 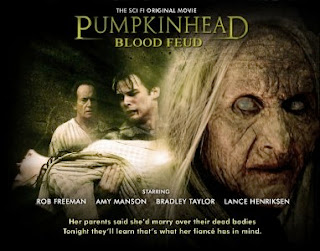 What is it about Pumpkinhead that makes him more than just a generic monster?
“There’s a very elaborate mythology around him. I think the first film’s an excellent morality play and I like the complication involved with the summoner feeling like he’s in the right then realising that revenge is not the best option and violence begets violence and all that stuff. That makes it somewhat deeper than your standard stalk-and-slash movie. Plus it’s a great monster, a great design. Stan Winston designed it in the first place. If you’re making a monster movie, you want to make a monster movie with a good monster - and I think it is a good monster.”