Emil Hyde, director/writer/producer of the very enjoyable horror-comedy The Landlord, kindly answered a few e-mail questions for me in March 2010.

What is your film-making background?
“Prior to making The Landlord, my only film-making experience was shooting some no-budget music videos for my band, where we basically took a camcorder and filmed ourselves running around in ridiculous barbarian and robot costumes. The Landlord was the first time we actually wrote a script and tried to tell a coherent story about an average guy who inherits a demon-infested apartment building from his devil-worshiping parents.”

How did you assemble your cast and crew?
“My good friend Rom Barkhordar, who plays the flesh-eating, late-night-television-watching, Hawaiian-shirt wearing demon Rabisu, is a fairly accomplished stage and television actor. Readers in the United States may have seen him in car commercials or playing terrorists on police dramas, and video gamers worldwide know his voice acting as Subzero from the Mortal Kombat series. Anyhow, Rom was able to convince several of his comparably accomplished friends to appear in The Landlord for no pay, hence we wound up with a far better cast than most zero-budget indies.

“On the crew side, we know several professionals here in Chicago who worked on movies like The Dark Knight and the Nightmare on Elm Street remake. And while we couldn't afford to hire them, even at a heavily discounted rate, we did bring them over to my apartment to give our unpaid art-school volunteers a crash course in lighting, sound, etc. Some of the volunteers absorbed the lessons better than others, and a few members of The Landlord's crew have gone on to score ‘real’ jobs in the industry.

“Whenever you have a situation where no one's getting paid, there's bound to be chaos. People have conflicts with their day jobs, or some just say ‘fuck it’ and don't show up, leaving everyone else to scramble for a solution. More than one of the actors in The Landlord didn't realise they'd be appearing in a film when they woke up that morning - we called them over as a last-second replacement for someone who didn't show. But, despite the turmoil, there's also magic and camaraderie.” 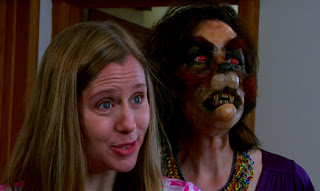 What sort of balance between horror and comedy were you aiming for (and how well do you think you achieved that)?
“We followed the ‘Will Ferrell rule’, where you take an absurd situation - in the case of The Landlord, a guy owning an apartment building where demons eat the tenants - and play it completely straight. From there, the horror/comedy balance pretty much took care of itself, in that the situations were often funny to the audience, but always deadly serious for the characters. As for how well we achieved it... that's for each viewer to decide.”

What problems did the make-up and effects present for a low-budget indie production like this?
“Make-up was a huge challenge for the actors playing the demons, in that they were both acting in The Landlord during the mornings and on stage in the afternoons. So they'd show up on set at the crack of dawn, spend two hours in the make-up chair, an hour and a half in front of the camera, then another forty-five minutes in the make-up chair scrubbing all the make-up off, after which they'd have to race across town to get dressed and made up for whatever play they were in. It was tense, racing every day to cram in all the shots we needed, and left little time to improvise and experiment with those scenes like we normally would, but I think it all turned out wonderfully, considering.

“As for visual effects, there are over 270 visual FX shots in The Landlord. In every case, we'd ‘rehearse’ the effect beforehand - for instance, if a demon was going to teleport in a flash of light, I'd make a short film of myself teleporting in a flash of light. That way, we'd know exactly what we needed to get on video when the shooting day arrived.”

How has the film been received by audiences and critics?
“Well enough. About a third of critics have said, ‘This is a fantastic story for any movie, regardless of budget!’, while a third have said, ‘It's not bad for a low-budget effort’, and the last third said, ‘It's shit’. Still, we've had more than a few people approach us at horror conventions and film festivals, telling us it's one of their favourite recent movies and how they've watched it several times over. If we can make a few people's favourite movie for $20,000, my guess is we can make a lot of people's favourite movie for $2 million.”

What are you working on now?
“Our next project is called The Dog Cage, and it's about a monster-hunting cop who, after getting bitten by a werewolf during a raid, is locked up in a state-run asylum for monsters. We hope to produce a graphic novel adaptation sometime this year, and a movie whenever we can scrape the cash together. Speaking of which, your readers can buy copies of The Landlord at www.thelandlordmovie.com.”