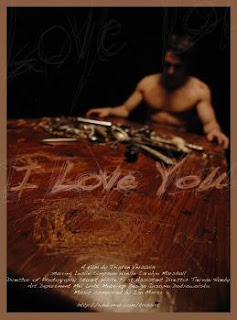 There are several paths one can take to being a film director. Some people just plunge straight into directing low-budget, independent movies. Some go to film school with the express intention of emerging as a director like a moth from a cocoon. Within the industry, the two most common career paths are probably editing and cinematography and you can often spot these in the film-maker’s work. An editor-turned-director like Jake West makes films which depend on construction: flashbacks and fantasy sequences and jump-cuts and points of view. A DP-turned-director like Alan Ronald makes films where what is shown takes precedence over how it is arranged. Cinematographers’ films tend to be more visually poetic and languid; editor’s films are often more frenetic and intricate. Neither approach is better or worse than the other - that depends on the individual director - and both of course rely on understanding something of the other skill.

Occasionally one encounters directors who started as writers, producers or 1st ADs but these are rare and I don’t know of any directors who started as production designers or composers although I suppose there might be one or two. However, another route to the top of the crew has fairly recently become viable and that’s via special effects. Robert Kurtzman, Robert Hall and Chris Walas are examples of FX-guys who moved into the director’s chair and I think what distinguishes ex-FX directors is a propensity to really incorporate effects into the story. You might think that someone experienced in effects would want to cram their films with effects but, apart from the fact that they’re obviously moving into directing to make a change from doing effects all the time, it is very evident that effects artists use effects sparingly and integrally precisely because they are so experienced. It’s the directors with no background in special effects who often feel the need to cram them into every corner of a film, whether they’re needed or not.

Which is where my old mate Tristan Versluis comes in (declaration of interest there!). 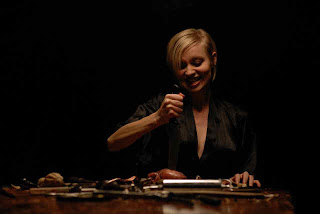 Tristan has done special effects for a load of recent British indie flicks including Evil Aliens, Cradle of Fear, Broken, LD50 and Frank Scantori’s when-will-we-ever-see-it fantasy epic Warrior Sisters as well as being part of the crew on stuff like Sweeney Todd and Doctor Who. He has also moved into directing his own short films, starting with Plastic Reality. He followed this with Pixel but while that whirrs away in post-production he has made this little gem - short on dialogue, high on concept.

Reviewing a film where basically a bloke sits at a table and does something then a woman does something the end - is tricky. If I tell you even one little thing, I’m telling you everything. Look, it’s called I Love You, it literalises the concept of the heart as the seat of romance and passion, it’s made by a guy who specialises in prosthetic effects for horror films. The film is icky without being gross, shocking without being unpleasant. Probably it’s greatest accomplishment is that it is both gory and sexy without any violence or nudity. Exploitation film-makers may think they’re being ‘sexy’ by cramming their movies full of topless busty bimbos - and let me stress, I am as big a fan of topless busty bimbos as the next bloke - but frankly you haven’t seen sexy until you’ve seen Axelle Carolyn, a woman composed of at least fifty per cent cheekbone, blink slowly.

Nor, for that matter, have you seen self-inflicted pain until you’ve seen Leslie Simpson (no relation) do things to his bare chest with a range of household cutlery. It’s to Tristan’s credit - and it is indicative of a good horror film - that we come away from I Love You thinking we’ve seen more and worse than we actually have. 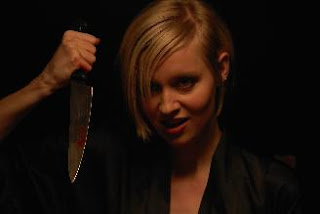 Simpson (honestly, no relation) is something of a Neil Marshall regular, having appeared as a squaddie in Dog Soldiers, a crawler in The Descent and ‘Carpenter’ in Doomsday (or possibly ‘a carpenter’ - I haven’t seen it yet). Axelle Carolyn (as she is credited on screen) is, in full, Axelle Carolyn Marshall (as she is credited on the poster). She’s in her hubby's latest feature Doomsday too, writes for Fangoria and was PR girl on nouveau Hammer episodic malarkey Beyond the Rave - which starred Leslie Simpson (definitely no relation) and had effects by young Mr Versluis.

For this picture, Tristan designed the prosthetics (while he was supposed to be working on Book of Blood) but left the application to Duncan Jarman, whose CV goes right back to Alex Chandon’s Bad Karma in 1991 and also takes in Funny Man, Proteus, Pervirella, The Killer Tongue and a bunch of big budget stuff.

Stuart Nicholas White was DP on I Love You, assisted by Trevor Speed (who knows Tristan from The Devil’s Chair and was DP on The Scar Crow) and Simon Pinfield. White and groovy-named 1st AD Tiernan Hanby previously worked together on Psychic Cat Productions’ film noir spoof Detective Story. Art director Mel Light is another Beyond the Rave alumnus. Justyna Dobrowolska handled make-up.

Although one might expect a film directed by an effects guy to be very visual - and one would not be disappointed here - I Love You also benefits from some noticeably terrific sound design. Let’s face it, the mere fact that it’s noticeable means that it’s either very good or rubbish, and it ain’t rubbish. Paul Yarrow is credited as ‘sound designer and recordist’ and I feel confident in saying it’s probably not the Paul Yarrow who used to be 33 per cent of Peter, Paul and Mary. Mind, I also feel fairly confident in saying that either the IMDB or Wikipedia will think it is at some point. Ian Morse composed the score - there’s an effects guy called Ian Morse, maybe he’s branching out. 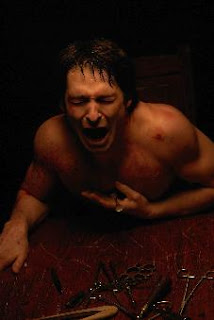 The other credited crew are stills photographer Owen Billcliffe and boom op Alan Leer. Tristan gives himself ‘directed, edited and produced by’ and it’s noticeable that there’s no script credit. But then, there wasn’t really a script per se. There’s only seven words of dialogue!

I Love You is as brilliant in its execution as it is simple in its premise. Only two things stop it from getting an A+ and neither is a problem, just something that distracted me momentarily. The first is that, yes I know it’s fantasy and allegorical and whatnot, but just like the victims in Heartstopper, Leslie Simpson* appears to have no sternum. And the second is that the collection of implements on the table includes not only knives, forks and scissors but also spoons and at least one ladle. I just keep thinking: what was he planning to do with a ladle?