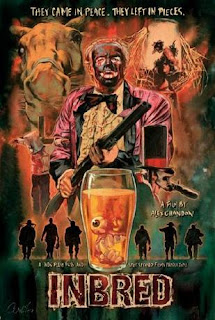 Inbred is Alex Chandon’s first feature since Cradle of Fear, a film which was released on video in April 2002. Let’s just consider what has happened in the intervening decade.

Back in 2002, there was no YouTube (invented in 2005), no Facebook (2004), no Twitter (2006), not even MySpace (invented in 2003) - the only way to spread the word about a film was through magazines and fanzines (of which there were still a few). No-one was going to see your trailer. Cradle of Fear had a website, crude and simple though it was, and thought it was at the cutting edge of indie film marketing for having this. And it was, it really was.

There were DVDs in existence ten years ago but most people still watched things on VHS, usually rented from Blockbuster or a corner shop. There was certainly no Blu-Ray or any of that HD nonsense. According to Wikipedia, 2002 was the year that the last Betamax VCR was manufactured!

Most films were still shot on 35mm or super-16, and most cinemas/festivals required a 35mm or 16mm print. Also, we were all a lot younger, slimmer, fitter. Jason Impey was doing his A-levels and Liam Hooper, director of Darkwood Manor which screens in a few weeks at the 2012 British Horror Film Festival, was still at primary school. I was doing a Masters Degree in Scriptwriting and working on a biography of a certain recently deceased comedy sci-fi author for a major publisher. TF Simpson was just a twinkle in my eye (and a stern look of admonition in his mother’s).

Jeezus, when did we all get so old? 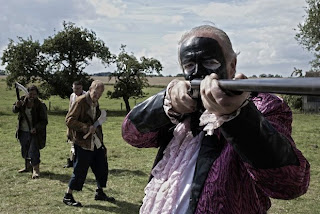 Until 2002, there was an average of three British horror films released each year, but that year saw the first blip in this low production rate. In the space of 12 months, a dozen UK horror features were released including four which made a significant splash: Dog Soldiers, 28 Days Later, My Little Eye and Cradle of Fear. Fangoria ran a ‘British Invasion Special’ issue and in an issue of Scriptwriter magazine the phrase ‘British horror revival’ was coined (not by me).

In my book (did I mention I’m writing a book?) I single out Cradle as being very important in the burgeoning BHR, moving away from the bleak miserablism of (nevertheless great) films like I, Zombie and Urban Ghost Story to a much punchier, entertaining, but still set-your-watch-by-it ultra-contemporary style of film-making. Cradle of Fear was produced about the same time as Channel 5’s groundbreaking anthology series Urban Gothic and the two have much in common. They were startling then and they still stand up really well today.

Ah, today. September 2012. Ten long years we’ve waited for a new Alex Chandon movie, while the world, and film-making, moved on at a reckless pace. Was it worth it? Remember, we waited a long time for the Star Wars prequels, Indiana Jones IV and the film version of Hitchhiker’s Guide. So was Inbred worth the wait?

Inbred is riotously funny, insanely gory, jaw-droppingly horrific, arm-grippingly exciting and so intrinsically British it should have a Union Jack sticking out of its arse.

Thematically, this is another in a fairly long line of you-ain’t-from-round-here-boy horror films in which townies venture into the countryside and find that the locals are, shall we say, special. Films like Small Town Folk, Gnaw and The Cottage fall into this category and variants on the idea have surfaced in everything from Doghouse to Eldorado. But Inbred really shows how to do it right. 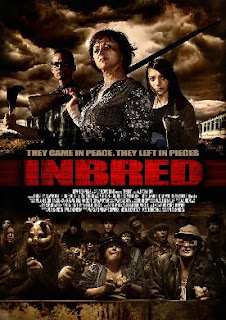 Jo Hartley (When the Lights Went Out, Dead Man’s Shoes) and James Doherty (Deviation) are Kate and Jeff, the adults taking four young offenders away in a minibus for a weekend of work and fun in the countryside. They park themselves in a semi-derelict cottage and head down to the local pub for a round of soft drinks.

Impressively, the script by Chandon and Paul Shrimpton gives each adult and each youth a clear, believable character, establishing the relationships between them clearly but unobtrusively. It would be very easy for Jeff to just be an officious, stick-to-the-rules, stick-up-his-arse figure of fun. And while he is sort of one of those, he’s a lot more besides. None of the six are simplistic and all of them will change and develop once we lurch into horror territory.

But first there’s the evening in the pub where we meet the scraggly-toothed, vacant-eyed locals and the film’s most memorable character - Jim, landlord of ‘The Dirty Hole’. Seamus O’Neill (Dead Man’s Shoes, Curse of the Were-Rabbit) gives one of the great British horror performances of recent years as Jim, who pretty much runs the village. He is happy to serve suspicious fresh lemonade and even more suspicious home-made pork scratchings to the visitors, on the house, but later, when things kick off, Jim will be the ringleader. Indeed, the ringmaster, quite literally.

The next day, the townies set to work: recovering salvageable metals (such as copper wiring) from a fleet of abandoned railway carriages in a field. I assume that Alex and Paul either knew about these carriages already or wrote them into the script when they found them. I can’t believe they sent some hapless location scout around Yorkshire on the off chance that there might be some derelict rolling stock on a hillside somewhere.

Among the carriages, the townies run afoul of three locals and things escalate, rapidly but believably (and comically too, in a sick way). One of the party is accidentally injured, ferried back to the pub and - well, that’s when we start to find out what makes Mortlake such a special village, so rarely visited by outsiders. The locals have, ah, entertainments which are a little stronger than you might see on Saturday night telly. 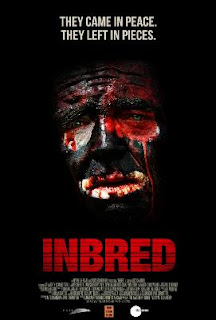 The really great thing about Inbred is that it’s a solid horror film as well as a comedy. It’s actually scary and tense and frightening. We really feel for these people - we want them to escape, or at least survive, and we genuinely (perhaps justifiably) fear that they won’t. But at the same time, it’s extremely funny. You could take the comedy out - and you would still have a good horror film. You could take the horror out and you’d still have a good (if probably very short and incomprehensible) comedy. This combination of scary horror and funny comedy is something which very few horror-comedies pull off, most plumping for (whether intentionally or not) either scary comedy or (supposedly) funny horror.

Inbred is also marvellously imaginative in the manner of its violence and gore, which not only adds to the entertainment value but is also entirely credible within the context of the story and the locals’ theatricality. Far too often in horror films the more extravagant manners of demise seem to be there to serve the purposes of the special effects unit, rather than the other way round.

Among an excellent cast, all of whom hit the horror/comedy interface at just the right angle, are James Burrows (Eden Lake, uwantme2killhim?), Neil Leiper, Chris Waller and Nadine Rose Mulkerrin as the youngsters. Emmerdale’s Dominic Brunt, whose own horror film Before Dawn follows hard on the heels of Inbred, clearly has fun as a chainsaw-wielding lunk; Mat Fraser (Kung Fu Flid) appears without explanation in one scene to hammer some nails in; and Emily Booth is in a fun but completely irrelevant prologue. Also in the cast are Mark Rathbone (Cradle of Fear), George Newton (The Eschatrilogy, Dead Man’s Shoes), Lee Jerrum (Dead End) and Neil Keenan (who has been in all previous Alex Chandon films - even Siamese Cop!).

Cinematographer Ollie Downey (Deviation) does a bang-up job with both interiors and exteriors; editor Oliver Griffin has lots of TV credits including assistant editor on Urban Gothic, and he also performs commendably. Dave Andrews (A Day of Violence, Aggressive Behaviour) provides the music, of which the most notable piece is of course the ‘Ee bah gum’ song. In the film, this is an incomplete, interrupted performance, but on YouTube you can find both the full song and a version performed live on stage by Alex at Frightfest.

Inbred looks fabulous due to the terrific production design and art direction of Melanie Light (Psychosis, The Scar Crow, Beyond the Rave, Omni). Tris Versluis, Graham Taylor and Duncan Jarman all contributed to the special effects make-up. 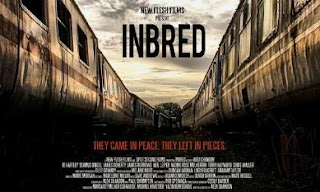 Going into to much detail about who does what to whom with which tool, weapon or device would just spoil the fun. Inbred succeeds magnificently on every level and really doesn’t put a foot wrong. Was it worth waiting ten years for Alex Chandon’s new film? Yes, it was worth the wait. Let’s hope there’s not another decade before the next one. But if there is, you could alternate nightly screenings of Cradle of Fear (which still holds up well) and Inbred, and keep yourself entertained until 2022.