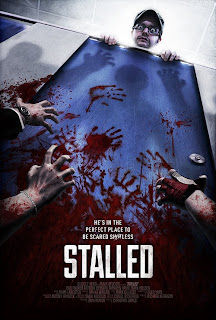 Stalled is the eagerly awaited (and long awaited!) second feature from the Freak Out team of Christian James and Dan Palmer. Palmer wrote this script solo and stars in the film, which James directs. It’s a zombie comedy. It’s very clever and very, very, very funny. It’s also slicker, more mature and more professional than Freak Out, although I appreciate the irony of using the term ‘mature’ to describe a film with this many toilet jokes.

Where their first feature succeeded despite its microscopic budget, for their sophomore effort Palmer and James have cannily embraced and even utilised their limitations, so that almost all the film takes place on one set and large parts of it consist of nothing but Dan Palmer on his own in one self-contained part of that set.

And that set is a toilet.

It is Christmas Eve - oh yes, you should also know that this is a very festive horror film - and the office party is in full swing on the seventh floor of an unspecified office block. Palmer is a never-named maintenance technician (his character is listed in the credits as ‘WC’!) called to fix a problem in the ladies loo, which has three stalls. He is forced to hide when a couple of scantily clad lovelies enter, who indulge in a little lipstick lesbianism before one of them bites a chunk out of the other’s neck. You saw this bit in the trailer. 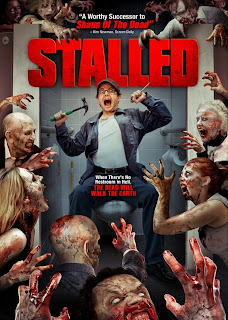 Before long, the room is filling up with undead office workers, some of them in festive fancy dress, and our hero is trapped in his stall. He’s safe as long as he stays there, but he can’t get out. And he doesn’t even have his toolbox with him, which he has left over on the sinks. Not that it has many tools in it tonight, because this is his last day on the job and the toolbox is stuffed with money which he really, really wants to take with him if and when he affects an escape.

Of course, none of the zombies have any dialogue so in order to have some sort of character interplay the script introduces Evie, a lady trapped in the stall at the other end of the row (the middle one contains a dead zombie). We never see Evie, but in a clever conceit the film has ‘WC’ draw a picture of her in marker pen on the toilet wall and this allows Christian James to direct the conversations in a (slightly) more conventional way.

The plot of the film is our hero’s various attempts to reach his toolbox and escape, and it is here where Palmer’s script really shines. On paper, this could have just been a feature-length Road Runner cartoon with Wile E Coyote (hey: WC!) hatching a series of plans, each of which fails miserably and knocks him back to square one. But actually what we get is a well-plotted film with narrative development throughout the three acts. This is a film of cause and effect as each of the various schemes - to hit the fire alarm, to distract the zombies, to reach the toolbox and so on - is based around the current situation and available resources as they stand after the failure (or incomplete success) of the previous effort. Particularly hilarious is a possible rescue which is derailed due to a terrible miscalculation, and I’ll say no more than that.

Stalled is a movie of constant surprises which make it a delight to watch (as long as you’re not averse to crude gags, cleverly delivered). Palmer is absolutely terrific in the lead role, bringing real pathos and depth to the character, and his dialogues with Evie (Hollyoaks' Tamaryn Payne, also in Small Town Folk) open up both their characters, yet leave more to be discovered. I don’t think it’s a spoiler to say that near the end of the film the action finally moves out of the ladies loo; as indeed it does briefly earlier during a very funny musical fantasy sequence. The whole thing builds to a climax which is moving, ironic, clever and satisfying. 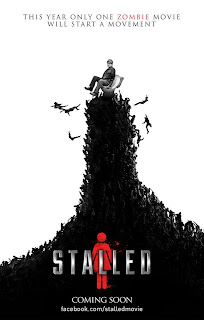 ‘Moving’ is another odd word to use here, where one would expect to see more uses of ‘movement’. But this is a heart-warming film which never forgets that it’s set at Christmas. Stalled could well become a staple of horror fans’ festive parties, a sort of zombie It’s a Wonderful Life. Freak Out also had a real sense of warmth and compassion in its central relationship and this second film confirms that Palmer and James have the skill to hit all three targets: good horror films which are not only also good comedy films but actually just ‘good films’ in the purest sense.

The supporting cast (which does include a few non-zombie characters) features several notable names: Giles Alderson (Night Junkies, The Harsh Light of Day, Till Sunset), Victoria Broom (Zombie Women of Satan, Three’s a Shroud, Umbrage: The First Vampire), Canadian actor Mark Holden (Final Destination 1 and 5, World War Z, Nightmare Street), Chris R Wright and Peter Stanley-Ward (Small Town Folk), Steve McCarten (Season of the Witch, Harsh Light of Day), TV presenter Rick Edwards and comedian Dave Fulton. Stanley-Ward was associate producer on the film (which reminds me of an old joke: What’s the definition of an associate producer? The only person who’ll associate with a producer. Thank you, remember to tip the waitresses.)

Cinematographer Sashi Kissoon, making his feature debut after a number of shorts (including some for Dave Fulton) does an absolutely stonking job of keeping the camera-work fluid and natural within this small set - and often just within the one stall - without ever becoming staid or repetitive. He has previously been part of the camera crew on features including Alan Partridge: Alpha Papa and something called Alien Uprising which turns out to be Dominic Burns’ UFO under a new title. Credit for the look and feel of the film must also go to the fine work of editor Mark Gilleece and production designer Antony Haylock. The special effects make-up is credited to ‘Snowy Ramone’ whom I suspect to be a pseudonym. And of course, Christian James’ adroit direction holds the whole thing together, creating what is instantly one of the best zombie comedies ever made.

More than that, what I really dug about Stalled was its very British parochialism and the way that it put a comedy spin on the ‘corporate horror’ subgenre which has been explored previously in films like Fired and London Voodoo. Severance put a blackly comic spin on corporate horror but Stalled is much less subtle and works absolutely bloody brilliantly. If you like zombies, if you like horror-comedies, if you like films where characters try to fish mobile phones out of toilets full of mashed zombie brain, you owe it to yourself to watch Stalled at the earliest opportunity, whether or not it’s actually Christmas.