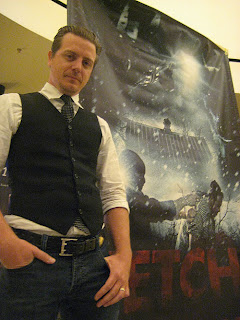 How did you land this gig, and what sort of stuff have you written previously?
"I was one of the actors in Terror Firmer, the latest Troma release and had been working at the Troma offices since completion of that film. Lloyd Kaufman knew my interest in writing and my deep and profound love of Troma films. He also knew me well enough to trust me when I told him I could deliver a script in two weeks. I had submitted a script to Troma a long time ago called The Power of Ten - a ludicrously hyper-violent action flick - in the hopes of getting the writing gig on Terror Firmer. Needless to say, I didn't get the gig, but Patrick Cassidy was working for Troma at the time and he read The Power of Ten and enjoyed it. It was a combination of having written a few scripts before (just for fun, but it showed I was familiar with the format, etc.) and Lloyd being familiar with my work ethic - Toxie 4 was the first script I've written to actually be produced.

"I was given the project right after returning from the Cannes premiere of Terror Firmer in May 1999. Lloyd had been planning on shooting Toxie 4 since completion of Terror Firmer and he had finally received a script from someone else which was unacceptable. He needed a completed screenplay as soon as possible, as the film was slated to shoot in September! The investors needed something concrete to see before they would cut the cheques, so Lloyd called me in and asked me to write the screenplay.

"Incidentally, my trying to get the writing gig on Terror Firmer and ending up being one of the leads in the film were totally unrelated. Lloyd didn't even know I had auditioned for the film and Will Keenan, the casting director for Terror Firmer, didn't know that I had submitted writing for consideration to Lloyd - I guess it was pure fate for me to become involved in the film company that had such a heavy influence on my formative years."

In writing a Troma movie, what instructions or rules are there about things like: how much gore you should show; how many women with melon-heavy breasts you should include; how fat the fat slob eaten by the elevator should be, etc?
"I was given a few basic plot points (if you could call them that):
1) A plastic surgery sub-plot
2) Toxie's wife gets pregnant
3) An abortion sub-plot
4) A Columbine-like high school shooting incident
5) There had to be good and evil versions of Toxie, Kabukiman, etc.

"Other than these few directional pointers, my main instructions were to hurry up and turn in a complete script! I turned in the first draft of Citizen Toxie (then called A Tale of Two Toxies) in twelve days.

"Luckily, I had grown up watching (and loving) Troma films. I was also heavily involved in Terror Firmer, so I knew where we needed to take the film. In essence (especially if you've seen Terror Firmer) there are no limits! I was familiar enough with the Troma style and the mythos of the Toxic Avenger character to be able to put in enough boobies, ultra-gore, social commentary, and slapstick to (hopefully) please the fans. Hell, I'm nothing but a slightly glorified Troma fan, so I just went with my gut(s). My primary goal in writing Toxie 4 was to not repeat the second and third Toxie films (which I, and a lot of fans, don't dig). When in doubt, you should always include more of all of the above elements. Troma has a standard to uphold, after all!"

How many drafts did the script go through before shooting, and how much has it changed during shooting? In fact, does the finished film bear any resemblance whatsoever to what you set out to make?
"Oh, man! The script went through about ten or twelve re-writes (which we did during pre-production!). I'm actually pleasantly surprised at how much of the skeleton of the first draft remained intact, even after all the re-writes. Nevertheless, the script went through many permutations. Actually, when I was first assigned Toxie 4 I was told that it would be a $2-3 million project, so I really didn't hold back - lots of explosions and grisly FX set-pieces and kung-fu-style fighting, etc. There were also more locations. We ended up bringing Toxie 4 in for about $300,000, but still managed to make a $1.5 million-looking film for that amount! The first draft was more ‘superhero spoofery’ with some Tromatic elements. The re-writes were done to accommodate budget and to continue to push the envelope in regards to gore, sex, and all of the other elements that make Troma what it is."

The credited screenwriters on Citizen Toxie are yourself, Patrick Cassidy and Uncle Lloydy: how is the actual writing divided up between you?
"Every Monday-Saturday I would work in a producer capacity at the production office. Every Sunday, Patrick, Lloyd and I would meet at Lloyd's house for an all-day script meeting. Basically, Patrick, Lloyd, and I would re-read the script and kick around new ideas. After the meeting, saddled with a ton of fresh notes, I'd go home and re-write all night until we had another draft with the requested changes. I have to admit this was extremely gruelling, so Patrick ended up doing two or three of the re-writes. Lloyd and Patrick had lots of input into the story (as did the ever-decreasing budget), but I (unfortunately) had to do most of the actual ‘pen to paper’ writing for the film." 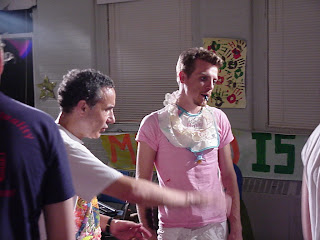 How did you end up being First Assistant Director on the film too, and did seeing the production from that perspective influence the rewrites you did during production?
"I ended up being First AD by default. We had an AD who just wasn't working out - a nice guy, but he was used to making films for other companies, where the AD has a very specific job. A Troma AD has to know the script inside and out and has to operate as more than just a guy who calls out the shoot. Since I had been so heavily involved in the project from day one, it was natural that I should be the AD (a truly hellish job, let me tell you). I know that there can't be that many instances where the writer is also the AD - the two jobs are at odds, really. The writer wants everything to be beautiful, perfect. The AD's job is to bring the film in quickly and efficiently. It was a weird experience, but once on set, I took my AD job more seriously - words on paper don't mean anything if you can't get something in the can."

As well as writing the movie, you also appear in it. Did you write that role specifically for yourself, and have you resisted the temptation to give yourself all the best lines?
"I actually had no intention of being in the film - I was way too busy trying to write, produce, assistant direct, etc. Lloyd asked me to take a role in the film because he apparently liked my performance in Terror Firmer. While my acting skill, in my opinion, is negligible, one thing I can be relied upon as an actor is to hit my marks and not need more than one take. This is important to a Troma film, as the film stock itself is the priciest item on the budget line! I took the part of ‘Tex Diaper,’ a gun-toting maniac and leader of ‘The Diaper Mafia.’ I picked Tex because he gets killed off (thereby limiting my acting time to just a few days, giving me time to concentrate on other production issues) and he's a bad guy. I got to carry around a giant M-60 machine gun and kill a slew of students and then Toxie disembowels me (very bloody!). I always liked Tex, but didn't write him specifically with myself in mind - he does have some pretty cool lines, though. It was tough trying to be taken seriously as an AD while wearing a pair of adult diapers and a baby bonnet, but we managed." 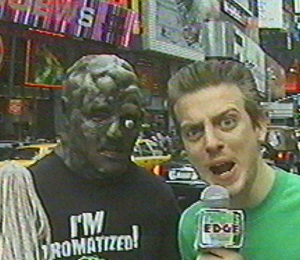 What are the best and worst aspects of making a Troma movie?
"The best aspect of making a Troma movie was the lack of egos. These movies are pure, man. The people that make the movies don't do it because they want a lot of money or because they want to be famous, etc. They are truly unique films that bow to no system, made by people who simply want to make movies. Knowing that I'm making a movie that someone like myself can truly enjoy is the ultimate reward. It may sound hackneyed, but I didn't sleep two hours a night on a cold, hard, concrete floor away from my wife for thirty-five days in a place with no shower (those are some of the worst aspects of making a Troma film) for the glory - I did it for love. And so did everybody else who made it through the film (we did lose over 50% of the original crew before production was even half way over!). I think that this is part of the reason for Troma's success over the years - they may not be great films, they may not be the most expensive films, they may not have the best acting, but their spirit is infective."

When will we see a finished print of the film?
"The picture locked about a week ago. Total running time (with credits) is about 105 minutes. Now we go into sound design and drop in the original score/soundtrack. After that, we strike prints. If all goes well, projectable prints should be in theatres and festivals as early as November 2000! I hope everybody enjoys it!”